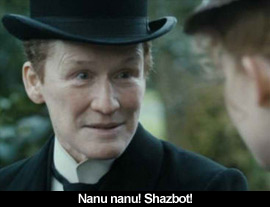 On the one hand, Rodrigo Garcia's Albert Nobbs is a patently ridiculous science-fiction tale set in a Victorian England run amuck with drag-king transvestites just looking for an opportunity to scrape out the same hardscrabble Dickensian existence as their male counterparts. On the other, it's a star-in-her-dotage's suffocating vanity piece excruciatingly bloated from a more comfortable one-act scale into full-blown awards-baiting period-piece virulence. If you discount Glenn Close-as-Bicentennial Man's freakish appearance, it's still impossible to believe that all of her/his co-workers have afforded him/her the same courtesy. It's an issue not ameliorated by the appearance of house-painter Hubert (Janet McTeer), who, in one of the more terrifying scenes of nudity in the history of cinema, reveals that he is also a she, and married, I guess, to the oddest-looking one from The Commitments (Bronagh Gallagher). It's that moment of horrific, aggressive, obscene (?) sexuality (stoked by her pairing with another oddity) that briefly clarifies what Albert Nobbs should have spent the rest of its time being--the one moment that hints at what David Cronenberg would have done with this material. Alas, the horror of the body is relegated to just this moment and later only ancillary to a breakout of typhus, while a flat, useless subplot involving a young handyman (Aaron Johnson) and the grasping maid Helen (Mia Wasikowska) he's banging takes centre court. Albert wants Helen for his own, you see, because he'd like to open a tobacco shop.

Albert, sometime in the tragic past, was gang-raped into a career as a butler, but just because her breasts are bound tight against her heart doesn't mean her desire for a normal existence has...oh, never mind. I'll be frank: I didn't actually understand any one minute of the film in relationship to the next. When Albert and Hubert have an outing together in lady's clothes and take a stroll on the beach that turns into a tampon commercial, I was pulled between continuing to try to figure this shit out and simply accepting that one day I'll see this programmed into a Midnight Special series, leaden with camp irony, at the local arthouse. Albert courts Helen to the confusion and mirth of Helen and her beau; Helen gets knocked up; Albert gets thrown headfirst into a wall; and Brendan Gleeson's great beard runs away with the film (as he/it is wont to do) as the inn's lusty, boozing doctor, delivering a mournful "Oh, Albert Nobbs" as a stupid movie's crowning moment of august stupidity.

What, exactly, is Albert Nobbs about? If it's feminism, then the best bet probably would have been not to portray all the non-passing women in the picture as shrewish and wheedling or ineffectual and simpering. When Hubert discovers, in the middle of the kind of Lifetime windstorm that flutters curtains, a sad little picture labelled "mother" in time to a baby's cry, it becomes clear that the film certainly has aspirations to a holy celebration of women. If Albert Nobbs is meant to be a tender character study of a little girl lost (take your pick), there's a big, giant hollow in the middle of it where motivation should be. It's never entirely clear what drives Albert beyond his desire to be Bob Cratchit: He doesn't seem to love Helen, doesn't seem to be sexual besides, and at the end, when it's suggested that Helen's bastard bundle is about to be swept up in the linebacker arms of freshly-widow(er)ed Hubert, the significance isn't clear. I do wonder if the main problem of Albert Hobbs is that for all the attempts at carving out a drama of dehumanization from this mess, Close and her collaborators forgot to first humanize their victims/players. On the bright side, the entire project is so misguided and fumbled that there's an ironic uplift offered by its existence. Call it the "Ed Wood" effect: Yes, it's awful, but, geez, someone really thought this was a good idea and, more, was dogged enough to get it made. The fact of Albert Nobbs, in other words, is far more touching, naïve, and sad than Albert Nobbs.-Walter Chaw