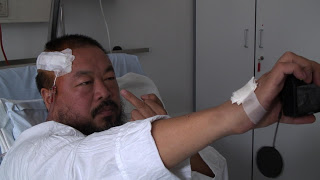 by Angelo Muredda Like Jafar Panahi and Mojtaba Mirtahmasb’s vital This is Not a Film, Ai Weiwei: Never Sorrydelights in capturing its dissident subject lounging in the company of animals. Panahi has his iguana, which roams the Tehran high-rise to which he’s been confined by Iranian authorities, and Ai, a target of systematic harassment by the Chinese government, has his cats, one of whose ability to open doors mystifies him. By framing Ai in this domestic scene, director Alison Klayman finds warmth in an artist recognized for his compulsive refusal to comply with draconian authority – see, for instance, the series of photos where he smashes ancient pots and strategically places his middle finger in front of cultural landmarks. Situating Ai as a cat man might seem precious, but Klayman is also doing sly political work here. She’s demystifying an avowed radical, and showing (without telling) how his oppositional stance to the government in projects like a multi-year effort to catalogue the students who died in 2008’s Sichuan earthquake due to shoddily constructed buildings are born not of snark but out of a real respect for individuals, be they undocumented students or pets.

That’s not to say there isn’t a trickster streak in Ai’s work, which collapses distinctions between activism and art. A Chinese art critic points out that there’s something of the hooligan to Ai’s insistence on getting in officials’ faces – sometimes literally, snatching a guard’s sunglasses to force eye contact – and adds that it’s a sane response to a governing body founded on hooliganism. Always engrossing, the film is at its strongest when it tracks Ai through his Kafkaesque negotiations with a system that refuses to acknowledge him. For a long stretch, we follow him as he files a complaint for a head trauma sustained in Chengdu, where he was set to testify for fellow earthquake activist Tan Zuoren before being detained and assaulted by local police. Ai acknowledges this complaint won’t go anywhere but invites Klayman to film him as he goes through the process anyway. The result is a documentary-within-the-documentary that champions due process when it's at its most endangered, and subtly argues for informed protest within a broken system as the highest form of patriotism. ***1/2/****