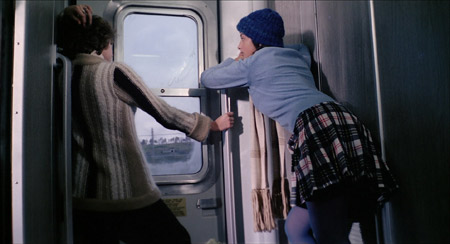 by Bryant Frazer It's feeding time for the monsters again in director Aldo Lado's 1974 quasi-giallo1 Night Train Murders, which sees the young and lovely Margaret and Lisa (Irene Miracle and Laura D'Angelo, respectively, making their film debuts) cross paths with violent criminals while travelling overnight by rail from Germany through Austria to Italy. The stage is set as Pacino-esque stickup man Blackie and his harmonica-blowing sidekick Curly (Flavio Bucci and Gianfranco De Grassi) mug an alcoholic sidewalk Santa Claus in Munich's Marienplatz. Menace! With that kind of element loose in the cities, why would two girls choose to ride some skeevy midnight train into Italy instead of opting for a sensible air flight? From one mother to another, via telephone: "Planes are never on time these days."

Because Lado's film cuts back and forth between the innocent girls and their street-tough counterparts, there's never any doubt where things are headed. And because the movie depicts rape, sexual mutilation, and murder, and especially because the third act involves a dead girl's father taking revenge on her behalf, à la Bergman's The Virgin Spring, Night Train Murders is often regarded as a blatant knock-off of The Last House on the Left. (In 1978, it was actually distributed stateside under the odd title The New House on the Left, with the appropriate "it's only a movie" shtick in the advertisements.) But in reality, the two films don't have so much in common.

For starters, Night Train Murders is more ambitious than The Last House on the Left. Lado's film introduces a new character on the train, a beautiful, well-dressed woman (it's Macha Méril, of Godard's Une femme mariée and Argento's Deep Red) bereft of inhibition or conscience. Assaulted in the train's bathroom, she quickly turns into a pliant sex kitten. (Cue exterior shot of locomotive plunging into a dark tunnel.) What looks at first like simple retrograde gender politics turns out to be class-based snark, as Lado casts this upscale woman as master of ceremonies for the upcoming funny games. It's at her urging that the two men, having cornered the girls in a dark compartment of a largely deserted train, escalate their base behaviour from testosterone-addled thuggishness to out-and-out savagery. And it's by her hand that the worst crime is committed.

Another big difference is that Lado is much more of a stylist than Craven ever was. The Ennio Morricone score, orchestrated for lonely harmonica, classes up the atmosphere a bit, as does the relatively careful cinematography by Gábor Pogány. At one point, the well-dressed woman blows out a candle, suddenly bathing the proceedings in an oppressive blue light that deepens the shadows and amplifies the through-the-looking-glass quality of the midnight torture session. The artifice adds distance to the depravity on screen, employing a strategy that's pretty much the opposite of the uncomfortable docudrama approach that made The Last House on the Left so appalling. It may seem like an odd thing to say about a movie in which a teenaged virgin receives a knife to the groin, but nothing in Night Train Murders is as hard to take as the moment in Last House where a kidnapped victim is forced to piss herself. Craven's film remains the gold standard for this stuff.

Unfortunately for Night Train Murders, the brutal midsection aboard the train is the only part that's of any interest. The leisurely opening set in Munich and the later, plodding material at Lisa's family home in Verona are full of padding, and the final revenge sequence lands with substantially less power than the crimes that preceded it. (For some reason, an early scene includes footage of an actual surgical procedure, which serves no real purpose but to highlight the general phoniness of horror-movie representations of blades cutting skin.) The execution is pedestrian, with Lado never venturing far down the more surreal or dreamlike paths favoured by his better-known compatriots in the genre arts.

Worth a note is the movie's sly humour about European politics, exemplified in one scene where an academic type notes that totalitarianism--with this, he nods approvingly in the direction of China!--may be one way to control amoral behaviour, and another that has Blackie bursting in on a compartment full of old men singing a German anthem to deliver an enthusiastically reciprocated "Heil Hitler." His Nazi salute turns quickly to the obscene French bras d'honneur before he slams the compartment door shut and gleefully scampers away. (Say what you will, the Fascists made the trains run on time, am I right?) It beats the risible dinner-table yakking later on about the roots of society's ills. No need for such a blunt restatement of the picture's central theme--soon enough, we'll see the underclass punished for its aberrant behaviour as the similarly culpable bourgeoisie steals away blamelessly into the night. 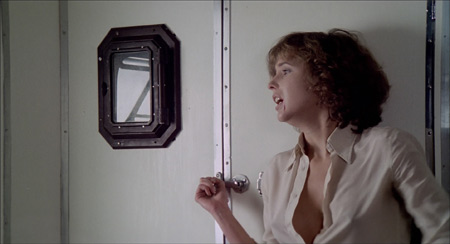 Blue Underground seems to have catalyzed a widespread re-evaluation of Night Train Murders among horror enthusiasts with its DVD release back in 2004. The title doesn't even appear in my go-to horror reference, The Overlook (Aurum) Film Encyclopedia, which was last revised in 1995, though it does take up most of four pages in the "Rip-Offs and Rehashes" chapter of the definitive Wes Craven's Last House on the Left: The Making of a Cult Classic by David A. Szulkin, who slams it for its "rancid philosophizing." Amusingly, the critical quote gracing the disc jacket ("More reprehensible than Last House on the Left!") was taken from a blurb by an AllMovie Guide writer who clearly hadn't seen the film or understood anything about the circumstances of its making. Run a Google search, though, and you'll find countless opinions on Night Train Murders registered following home viewings over the last eight years--including some by writers who claim it eclipses Last House in quality.

THE BLU-RAY DISC
Quality is a tricky metric for movies that get their juice entirely from scenes of terror and degradation, so I'll simply note that, while neither of these are especially fine films, there are good reasons why The Last House on the Left is the one that enjoys international notoriety and landmark status. That said, the new Blu-ray edition should only further Night Train's rehabilitation, rendering its mid-1970s European locations in high-definition and the bloody wee-hours debasements with an emphasis on the rich and ironically seductive qualities of Lado's blue moonlight. The 1080p, AVCHD image is slightly letterboxed to 1.85:1 (not the 1.66:1 you might expect) and has been encoded at generous bitrates, despite the fact that it resides on a single-layer disc. I detected no compression artifacts from a normal viewing distance.

Blue Underground has come in for some criticism of the thick layers of grain that encased titles such as Django, and while I have found tack-sharp layers of grain on the company's Blu-ray releases to feel just right, I'm re-evaluating them based on some convincing arguments2 that their grain is in fact entirely too sharp. I'm intrigued by the idea that cheap Eurocult pictures could legitimately look a lot cleaner on Blu-ray than we've seen to date, but I remain a little concerned that BU has responded to the complaints in part by cranking up the DVNR. Grain is quite mild here, and in day exterior shots it's hardly in evidence at all. Detail is likewise muted--fabrics, feathers, and complexions are awfully blank in some shots. In a pan along the Marienplatz showing the blue-and-white awnings of booths set up in the square, it's clear that the elements are damaged, with a raindrop pattern of splotches dancing across the frame (see screencap #3). This would have been even more distracting without noise-reduction, but as you step through frame by frame you can see the odd ways the algorithms are monkeying around with both the splotches and the fine details, like the slender vertical component of a yellow crane near the top of the frame that flickers in and out of visibility. The next shot includes my favourite harbinger of aggressive DVNR, as geese wheeling through the sky are intermittently interpreted as print speckles and erased from the frame. Still, it's a good-looking disc on the whole.

The 2.0 DTS-HD MA track is as you'd expect from a decently-transferred Eurocult film of this vintage. The dubbed English dialogue is clear but not overly bright, standing out way in front of the rest of the mix. Switching my receiver to surround mode steered everything to the centre channel, as God intended. It would obviously be preferable to have an Italian listening option, regardless of whether the original-language dialogue was overdubbed in post.

Supplements are recycled from the DVD. "Riding the Night Train" is a 15-minute interview (in upconverted standard-def) in which Lado himself defends the film as a deterrent to violence, explains its reliance on the colour blue, and discusses the censor board's reaction to the picture and some other aspects of its production. (Amusingly, he blames Morricone for the incongruously treacly theme by the Greek pop start Demis Roussos, who was in Aphrodite's Child with Vangelis, that opens and closes the film.) Also on board are two trailers (U.S. and international) in standard-def MPEG-2, plus a gallery featuring posters, production stills, and other ephemera that give you an idea of how Night Train Murders was marketed around the world. (As usual, I'd rather these fill the frame horizontally or vertically than float in a window with wasted pixels on all four sides, but oh well.) Originally published: February 21, 2012

1. I know some aficionados would say that Night Train Murders is no giallo because it doesn't involve a mystery. I'm describing it that way because it's a useful shorthand for the film's stylistic characteristics, and because Night Train Murders inverts the usual whodunit. There's never any doubt about how or by whom the most heinous crimes are committed; circumstances only become murky when it comes time to assign blame and mete out punishment. return

2. Mainly here and here. The working theory appears to be that poorly calibrated CRT-based film scanners (at, say, a single European lab handling the lion's share of Italian 1960s and 1970s genre-film transfers) could yield an overly soft picture overlaid with a fresh layer of noise. If attempts were made to correct the softness by sharpening the image, the noise would be made worse. return