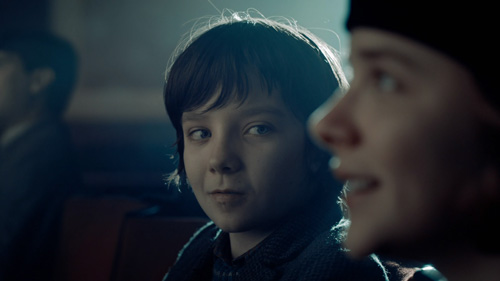 by Walter Chaw Channelling Jean-Pierre Jeunet and Robert Zemeckis to numbing effect, the once-vital Martin Scorsese follows his elderly Shutter Island with the honest-to-God borderline-demented Hugo, in which the titular French urchin helps Georges Méliès reclaim his cinematic legacy. It's a shrine to the birth of cinema, blah blah blah, the kind of thing someone as involved as Scorsese has been in film preservation was destined to make, I guess, at least at the exact moment that the ratio of working brain cells gave over the majority. It's heartbreaking to see someone as vital as Scorsese used to be end up in a place as sentimental and treacly as this, resorting to retelling the Pinocchio story with little Hugo (Asa Butterfield) as a clock-fixer (really) whose life's mission is to repair an automaton his dead dad (Jude Law) found in a museum attic--and who dreams one night that...wait for it...he himself is the hollow, broken automaton. I wish I didn't have to go on. Did I mention that it's in 3D? And that it's two-and-a-half hours long but feels like a slow seven or eight? Seriously, Shoah is a breezier watch.

Hugo lives in the steampunk-works of Montparnasse Station, the de facto clock-minder after his clock-master father dies in a museum fire and his alcoholic uncle (Ray Winstone) vanishes into the Seine. He tries to steal a clockwork mouse from toy-store owner Méliès (Ben Kingsley), is caught, and then befriends Méliès's orphan goddaughter, Isabelle (Chloë Moretz). When he steals away with Isabelle one afternoon for a fugitive screening of Harold Lloyd's Safety Last, anyone wanna lay odds on how long it'll be before Hugo recreates its signature moment on an hour hand outside the station? Slobbered over by people like me who are pleased to be able to trainspot references to Edwin S. Porter's The Great Train Robbery and the Lumières' La Sortie des usines Lumière à Lyon and know Méliès's own A Trip to the Moon as something other than that Smashing Pumpkins video, Hugo is, in truth, an awful introduction to the history of early film that Scorsese holds so dear, since it treats it as novel and adorable--as relics, museum pieces, dead art, essentially. Which I'll bet isn't the intent. Scorsese then goes to great pains to show how far film has come in the intervening century with this whiz-bang gewgaw period artifact that I think Jeunet actually made in 2004 (A Very Long Engagement) and 2001 (Amélie) and 1991 (Delicatessen), and again a few times in between. Not that Jeunet necessarily did it any better.

There's also an evil gendarme (Sacha Baron Cohen) with a squeaky leg brace and a shaky accent who loves a flower vendor (Emily Mortimer, who looks sad and maternal all the time now), and a Monsieur Freck (Mr. Dursley) who loves a Madame Maxime (Frances de la Tour), probably because he senses they're both in the wrong movie. There's a stern librarian (Christopher Lee) who likes to give orphaned books to loving homes, and an eager-beaver young film professor (Michael Stuhlbarg) very surprised to learn that his hero Méliès is still alive and kicking. Along the way, absolutely nothing happens for extended periods of stultifying downtime as Hugo cleverly evades capture, moistens his giant anime eyes, and gets blown off the screen by Isabelle in full cartoon Madeliene acculturation. Hugo is what an old person thinks is delightful for children, never suspecting that his intended audience can spot "nutritious" a mile away. It's that plate of mints your weird old spinster aunt keeps on her doily'd piano. And while we're talking about it, I never again in my life want to see Sir Ben Kingsley in anything. Ever. The only real audience for Hugo is people who think of themselves as cinephiles but don't mourn that the man who used to make Taxi Driver and Raging Bull is now making The Polar Express for pretentious wanks and poseurs. Originally published: November 23, 2011.

THE BLU-RAY DISC
Paramount brings Hugo to Blu-ray and Blu-ray 3D, and this is one of those rare cases where I wish I was auditing the latter. Nevertheless, I did screen Hugo theatrically in 3D, so I appreciated this opportunity to see the film with new eyes. While I won't go so far as to proclaim the movie's no different without that third dimension (as some contrarians have been tweeting), it's frankly not as dramatic a downgrade as, say, Echo Bridge's recent reduction of From Dusk Till Dawn's awesome 5.1 soundmix to 2.0. It helps that Hugo's 1.78:1, 1080p transfer has such articulate detail and contrast, giving the image a genuine sense of depth. Unfortunately, all the dust motes--a simple but reliably-effective 3D flourish, much like the snowflakes in The Polar Express--get a little overbearing in 2D, and the film's palette--meant, I think, to evoke two-strip Technicolor, if not the pastel colours of hand-tinted silents--ultimately hews too closely to the contemporary cliché of teal-and-orange. Shot with the Arri Alexa, this paean to celluloid was ironically Martin Scorsese's first digital narrative feature, and as expected this HD presentation is grain-free, albeit filmic. The occasional harsh-sounding line of dialogue barked by Borat or Gandhi notwithstanding, the attendant 7.1 DTS-HD MA track is excellent, rendering what is for Scorsese an unusually rollicking mix with an immersiveness to compensate for the 2D video.

Barbara J. Toennies helmed all but one of the five bonus HiDef featurettes, starting with "Shoot the Moon: The Making of Hugo" (20 mins.), a fairly typical overview of the production notable mainly for the enthusiasm Scorsese brings to the table--enthusiasm that was distinctly lacking in his promotional interviews for The Departed and Shutter Island, but that regrettably, for this viewer, did not prove infectious. Scorsese's raising a tween daughter right now (he says as much), and the film is basically a gift to her. Indeed, according to actress Chloë Moretz, little Francesca Scorsese is too young to watch any of her dad's previous work, yet I can't help but think if Scorsese had a son the same age he would've shown him Goodfellas by now. Oh, well: Enjoy your $200M pony, Francesca. Incidentally, all the 3D infodumping herein plays like a real cocktease on this particular release. "The Cinemagician, Georges Méliès" (16 mins.) hears from Méliès's great granddaughter and verifies that much of Hugo sticks to the facts of the filmmaker's life, while the not-uninteresting "The Mechanical Man at the Heart of Hugo" (13 mins.) looks at the history of automatons dating back to Ancient Greece before revealing that the robot built for the film could actually do the tasks you see it performing on camera. Neat. "Big Effects, Small Scale" (6 mins.) goes behind the scenes of the train crash with F/X supervisor Robert Legato, who engineered the impressive stunt with practical miniatures. Curiously, Scorsese is absent; since when does he farm this stuff out? Lastly, the mockumentary "Sacha Baron Cohen: Role of a Lifetime" (4 mins.) finds the actor pretending to be a diva and Scorsese Kuleshov'd into playing along. Alas, Cohen's laboured so hard to be an enigma in the Peter Sellers vein that he has only a generic "actor" persona to send up. A DVD/Digital Copy of Hugo adds a few grams to the keepcase. Originally published: February 27, 2012.