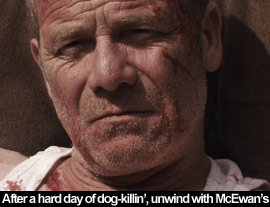 by Angelo Muredda Spielberg defenders who insist their master hasn't lost his grisly touch post-E.T. often point to the dead dog in The Lost World: Jurassic Park as proof of life. If dispatching a pooch is still the fastest way to collect a certificate of edginess, props to Paddy Considine, who's surely earned a gilded plaque for getting the unseemly job done before the opening credits of his first feature. (Not that animal lovers should take the title card as a cue to uncover their eyes.) Actor-turned-director Considine immediately stakes his claim to Ken Loach's British underclass miserablism, casting My Name Is Joe star Peter Mullan as the dog-stomper in question. But there's miserable...and then there's Tyrannosaur. Loach's best films have an incendiary quality, a direct line to the political, that Considine buries under a fast-mounting heap of dead dogs. Certainly, there's no requirement that directors who train their eyes on such bleak social milieus mitigate the darkness and usher us out the door with sunshine: comparable films like Lynne Ramsay's Ratcatcher stay successfully mired in the mud without collapsing into nihilism. That said, what we might expect of a project so invested in the stultifying effects of poverty is a better sense of what's eating its characters, rather than platitudes arguing that to be poor and male in Northern England is to be a bat-wielding tyrant whose empty rage extends even to canines.

While Tyrannosaur's limited insights don't justify the gruelling sit, it's hard to find fault with its excellent cast. Mullan's protagonist, whose occasional cruelty is behind the film's gutsy title in a roundabout sort of way, is thinly written. His Joseph has been carried over (down to the animal abuse) from Considine's 2007 short Dog Altogether, and these origins in a far briefer work show in the vagueness of his characterization. At its most complex, the movie chalks up his debilitating spells to a cocktail of alcoholism and unemployment, as if moving down a checklist of social causes of violence. Mullan, though, makes Joseph a livewire worth watching in spite of his brutality. His quicksilver temper transcends the flat rationales--a lost love, racist drinking buddies, etc.--the screenplay supplies to explain it, and seems to belong to an actual, deeply strange man capable of both generosity and murder, depending on when you catch him. Treated as a ghoulish Scottish prop in Spielberg's War Horse just last month, Mullan makes the most of this rare lead part, capitalizing on both tearful soliloquys and quieter moments where he's perched anxiously on a bar stool, about to pop.

Olivia Colman is equally strong as Joseph's moral foil Hannah in what's essentially a two-hander. A devout thrift-shop owner whose faith is increasingly tested by the violent abuses she suffers from her monstrous husband (Eddie Marsan, in maybe his most repugnant role yet), Hannah is part-Madonna figure, part-suffering saint--another victim of a screenplay that trades in shorthand and archetype instead of depth. Credit Colman, then, for burrowing into this divine woman's bruised skin and finding not only animal rage but also bleak humour. It's a great big performance, an actress's showcase that should help the mostly TV-based Colman get plum film roles, should she want them.

Considine brings a theatrical bent to Tyrannosaur's heavy drama, deferring to such outsized performances and meaty speeches and keeping the aesthetic grandstanding to a minimum--a wise choice. This is a nicely-lensed first feature with a lyrical attention to detail that once again recalls Ramsay's debut. Stumbles like the overbearing and maddeningly literal folk soundtrack by Dan Baker and Chris Baldwin seem minor next to the novice auteur's obvious knack for working with undervalued actors. All the same, you wish Considine the director had a better writer in his pocket and a clearer sense of the story he was trying to tell. Tyrannosaur has its grace notes, but it's fatally done in by its leadenness of tone as well as its ceaseless march of gloomy events--its insistence on pushing its Loach-inspired social-realist trappings past the reality threshold and into Grand Guignol. Call it one dead dog too far. Originally published: January 27, 2012.