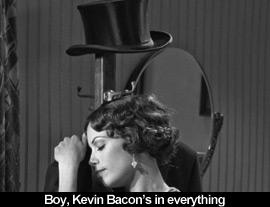 It's 1927, and George Valentin (Jean Dujardin), a silent-film icon--modeled on John Gilbert--at the height of his stardom, "discovers" effervescent starlet Peppy (Berenice Bejo) by not freaking out when she breaks out of a receiving line following the triumphant premiere of his latest potboiler. They part without consummating a lovely courtship, though that doesn't prevent Mrs. Valentin (Penelope Ann Miller) from engaging George in a Citizen Kane breakfast montage, nor does it prevent The Artist from engaging in a succession of anachronistic references to movies and their short history. Peppy is presented, see, as the first star of the new wave of talking pictures, while George hangs on, disastrously, to the Silents. In a fascinating passage, The Artist places George in a nightmare of castration in which the world erupts in noise, but he's left voiceless and the butt of some nameless joke before a growing coterie of dancing girls. In a scene straight out of Bette Davis's The Star, he auctions off all his belongings, then crosses a street before a movie marquee that declares him a "Lonesome Star." No fair guessing that Peppy is George's benefactor--a fact that George discovers in a moment scored like a horror film after he appears to try to immolate himself in a nitrate pyre (and just before he tries to finish the job with a revolver). The Artist is dark, in other words, and despite a rousing conclusion that casts George as a sly Fred Astaire manqué in 1932, the year Fred made his Hollywood debut, it never really gets any lighter.

Ostensibly a silent film with a few bits of dialogue (think Chaplin's Modern Times), The Artist offers up a 1920s picture with 21st-century editing and pacing. It's a sleight of hand, an illusion of pretension that by its structure offers the criticism that although we pine for the Eden of the studio assembly line's Golden Age, we likely wouldn't have the patience for the vast majority of its product. It's not entirely unlike Joe Johnston's subversively great The Wolfman, which, in a similar way, essays the corniness and nigh unwatchability of the secondary stable of Universal Monsters by being completely, artfully, jubilantly ridiculous. The Artist is a perfect, mute critique of both the contemporary audience and the vintage brand. It's a series of graceful set-pieces that mines every convention of American film from the twenties through the forties, and then, as its rimshot, it's Hitchcock married to Wilder, what with its woman in love with the dead, and its dead propped up in various poses (like Hitch's Harry; or the card game of the damned in Norma Desmond's parlour). What The Artist says about people who would like to sentimentalize and suspend the film industry in a bell jar is brilliant; I wonder if the right way to read it is to accept that George has pulled the trigger, and that everything that follows is the dream before dying. It's true they don't make 'em like they used to, but The Artist couldn't have been made in any other time. Originally published: January 25, 2012.