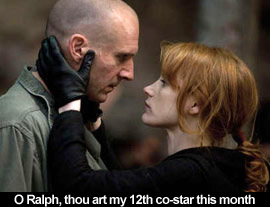 One of the least adapted of Shakespeare's tragedies, Coriolanus tracks the sudden political rise and fall of Caius Martius, a patrician bred to be a Roman soldier and then thrust into public affairs without the necessary PR and spin training. Dragged into the political arena by master manipulator Menenius (Brian Cox) and monstrous mother Volumnia (Redgrave), rechristened Coriolanus, and immediately tarnished in the public eye by populist agitators Sicinius (James Nesbitt) and Brutus (Paul Jesson), he's cast out of Rome as a traitor when he proves unable to either win the plebes' trust or face them without sneering. His banishment sees him collaborate with former nemesis and Volscian guerrilla Aufidius (Gerard Butler) in a plot to bring to its knees the city that so rudely discarded him.

Fiennes struggles through the overlong setup, for all his verve. While screenwriter John Logan's attention to the Roman populace's protests for bread resonates nicely with the recent Occupy movement, the director relies too heavily on the winking gestures to modern technology and conflict that plague contemporary Shakespeare adaptations. For the first half-hour or so, he seems to be compensating for the brevity of his part in The Hurt Locker by aping its aesthetic of quick cuts and frenzied zooms. The random chaos of contemporary warfare feels anachronistic given the text, which calls for Coriolanus to be a warrior visibly marked by his combat; the headshots and sudden disintegrations that befall his soldiers in an early skirmish are at odds with the set-piece that follows: a close-range knife fight with Aufidius that seems like a relic from the play, ported over without context. Because we know that Coriolanus's fate lies in his ill-planned political career, much of this introductory material scans as self-indulgent--the product of a first-time director's inability to focus.

The adaptation comes into its own, though, once Coriolanus has to square his family's political ambitions for him with his clear inappropriateness for the consulship. Fiennes has a knack for playing single-minded men who thrive in their element and flounder everywhere else. Coriolanus might be his best such role yet, a man who at one point looks on a janitor with terror and awe, as though he stands for something far more threatening than the Volscians. His discomfort at being publically praised for his military deeds and asked to bare his wounds for all to see is palpable, suggesting a barbaric variation on John Kerry, who similarly failed to capitalize on his medals and scars. Fiennes the auteur is also generous towards his supporting cast. He gives Butler the kind of long close-ups typically reserved for Shakespearean, not Neveldine-Taylor, royalty. And Redgrave, in her tidy military cap, erases all memory of her listless Elizabeth in Anonymous with Volumnia's eleventh-hour appeal to the son she raised for the slaughter. She veers from chiding to deferent with the ease Coriolanus can only muster in battle, and his capitulation feels as much like the director's bow to his actress as it does the son's to his mother. Coriolanus may not be the most polished first feature, but like its hero, what it lacks in poise it makes up in the force of its performances. Originally published: January 20, 2012.