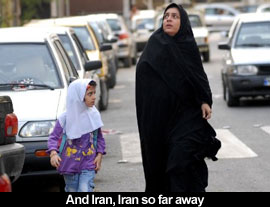 by Angelo Muredda In Armond White's latest "Better-Than" list, the champion of surreal juxtaposition pits Asghar Farhadi's A Separation against Joe Cornish's Attack the Block and finds the former wanting. "Action vs. Talk," he summarizes, in the poetry of tinyurl. Apart from the arbitrary matchup he stages between two very good films about getting to know your neighbours under the harshest of circumstances, White isn't completely off the mark. I won't defend his trite claim about A Separation's alleged "Iranian didacticism," but the film certainly is voluble. Farhadi wears his dramaturgy on his sleeve, opening with a carefully trained two-shot of middle-class couple Nader (Peyman Maadi) and Simin (Leila Hatami) at divorce court, parked in adjacent chairs as if settling in for a parent-teacher interview. They face us directly as they make their respective cases to a bored, unseen auditor: Simin wants to emigrate to the West; Nader refuses to leave his dementia-suffering father behind or grant his wife permission to leave with their eleven-year-old daughter Termeh (Sarina Farhadi, the director's own daughter)--more an effort to stall their separation, it seems, than an arbitrary flexing of his patriarchal muscle. Voluble, as I said, but not verbose. It's a provocative and deceptively straightforward setup, promising naturalism via Maadi's and Hatami's easy rapport while undercutting it with the artifice of their situation. Though the judge is unmoved by either side in this rhetorical showdown--"My finding," he tells Simin, "is that your problem is a small problem"--the stakes of this "small" quagmire, which is also a national and a gendered one, are made painfully clear to us by the couple's impassioned performances.

If A Separation is all "talk," then, it's because it's about intelligent people who can only navigate their impossible circumstances by articulating their positions, persuading someone else of their vision of the world. Vision becomes critical once an off-screen event casts doubt on Nader's integrity and forces him to defend himself in far more pressing circumstances, both legally and in the more damning moral courts of his wife and daughter. With Simin gone and Termeh at school, Nader needs a live-in housekeeper to care for his father (Ali-Asghar Shahbazi), who has recently stopped speaking. He turns to Razieh (Sareh Bayat), a devout Muslim and young mother who keeps her employ secret from her traditionalist husband Hodjat (Shahab Hosseini), a man deep in debt and even deeper in shame. Things are hard-going from the start, as Razieh's faith is at odds with not only this deception towards her husband but also her uncomfortable proximity to the incontinent older man, although they strike a workable balance until her unexplained absence one day sets off a chain of devastating events, none of which we witness with any clarity. An incomplete picture emerges once the events in question are restaged and narratively massaged by both parties--with the intervention of spouses and satellite advocates Simin and Hodjat--and placed before a series of magistrates, the most critical of whom, at least for Nader, is Termeh.

Nader is our gravitational centre through this legal morass, and Maadi delivers what might be the most grounded performance of 2011 as a decent rationalist with a temper, someone who prides himself on his ability to see both sides of an argument--no longer an asset when his everyday life now consists of endlessly defending a moment he can hardly remember. Farhadi's obvious sympathies for his situation do not, however, preclude the film from dramatizing, just as humanely, the plights of Razieh and Hodjat. Even as A Separation seems more comfortable in the secularized liberal den of Nader and Simin (Termeh is alarmed to see her mother gathering her books, the surest sign yet that her move could be permanent), the script takes very seriously Razieh's devotion as well as her doubts about the accuracy of her account and the divine repercussions of being less than utterly true. Nader might seem to have the most to lose if the cards don't fall his way, but it's Razieh who's mired in a profound spiritual crisis from which she may never emerge.

Farhadi is deft at keeping this pressure-cooker narrative in check, but his tendency to allegorize his minor characters sometimes returns us to the dramatic contrivance of the opening scene without the conceit that justified it. Discussions of what is to be done with Nader's father, for instance, mirror with conspicuous neatness later events surrounding Razieh's unborn child. If something is rotten in Tehran, we quickly guess, the first to feel it will be the most vulnerable at either end of the spectrum, and the most beholden to others for basic survival needs--a compelling sentiment that nonetheless delivers the national allegory a bit too squarely on-the-nose. A Separation hardly needs that extra push: It's a marvel of concision, a brilliant epistemological whodunit, and a deeply affecting family drama all at once. Originally published: January 13, 2012.