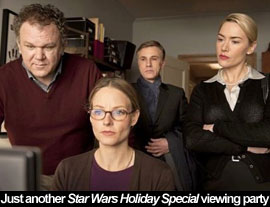 The premise is unashamedly stagey, founded on an inscrutable episode of childhood aggression that unleashes the competing forces Polanski and co-screenwriter Reza culture inside their Petri dish of an apartment. (The film was really shot in Paris, although its windows look out into a CG-augmented Brooklyn, in a nod to the transitory status of both play and director.) Ethical watchdogs Penelope and Michael (Jodie Foster and John C. Reilly) invite business-chic Nancy and Alan (Christoph Waltz and Kate Winslet) into their loft to work through a playground fracas between their two adolescent sons, and all find their niceties worn down before Alan can even plough through Penelope's horrible cobbler. What sets Carnage apart from less successful four-hander special-issues plays like John Patrick Shanley's Doubt is Polanski's bald disdain for the actual issues. Where Doubt politely leaves Father Flynn's relationship with the altar boys unimagined and unfilmed to trump up the thematic weight of Not Knowing (a cheat), Polanski veers to the opposite direction, opening with a long, Haneke-cribbed surveillance shot of the scuffling boys doing whatever it is that such boys do. Which is to say, nothing of interest, unless you want it to be: it's a deliberately unhelpful window into a melee so banal that an enterprising spectator could read it as a fight between virtually any competing value systems.

And so the parents fight over the (unobserved by them, unrevealing to us) minutiae of this brawl. While the play's dialogic structure tends to win converts to each of its four cast members at different points, it's unsurprising that the MVP in Polanski's version is Waltz's puckish attorney. While Alan is too unsavoury to be simply a Polanski surrogate, his repeated claim that violent actions cannot be apologized away--because they're the product of fundamentally human, "maniac" impulses--resonates, for better or worse, with the self-image the director has cultivated as an amoral libertine, tramping about Europe with open disregard for American if not human values. He's perhaps not as rich an avatar as Pierce Brosnan's indignant, exiled PM in The Ghost Writer, but Waltz carries himself with the lightness and poise of an Ivy League peacock who never took to social justice in college. Foster holds her own against him as his moral touchstone, someone who truly believes in aiding Africa, etc., bless her, at least before some late developments throw her into hysterics. Winslet and Reilly, though, don't always rate. A mannered performer who's great when mannered is called for, Winslet excels as long as Nancy is playing docile against her instincts--when, for example, she lets Penelope push her one step farther into admitting parental negligence than is necessary. She's less convincing later on, doing a garish pantomime of a closet libertarian unleashed by one swig of Scotch. Reilly suffers from having the most on-the-nose character, a seemingly gentle brute whose every action does thematic overtime in exposing the underside of liberal compassion--namely, wanton hamster disposal.

To his credit, Polanski infuses these occasionally-stilted Socratic discussions with narrative urgency: after a crisis that changes the tone in the room, his static camera starts roaming the halls uneasily. The film does drag, however, even at a scant 79 minutes; Nancy has a point when she shouts, "This is getting to be like, who cares?" Still, Carnage is a nasty good time, and surprisingly vital filmmaking for such a lark. Originally published: December 23, 2011.