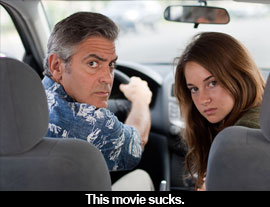 by Walter Chaw George Clooney is great, Alexander Payne is great, it's all very predictably great, and it's all so very predictable. The Descendants, Payne's fifth film, is an edgeless and anti-satirical adaptation of Kaui Hart Hemmings's novel that has its moments, all of them involving Clooney's Matt King shouting at his vegetable wife (Patricia Hastie, in the most thankless non-Michael Bay role of the year) in articulation of the mid-life emasculation opera in which Payne specializes. Armed with a voiceover to better seduce Oscar voters and awards-season audiences, The Descendants opens with Matt promising his comatose spouse that he'll be a better man and commit to a normal life with her, and then it proceeds to be nothing much more than a sitcom about what happens when a confirmed bachelor is forced to become the primary caregiver to his two sassy daughters. Eldest is reform-school girl Alexandra (Shailene Woodley), who used to have a drug problem and currently has a stupid boyfriend, Sid (Nick Krause). Her younger sister is little Scottie (Amara Miller), who says things like "motherless whore" because it's funny when a 10-year-old says things like that--even funnier when the matinee idol playing her bumfuddled dad does the dimwit surprise thing he did in O Brother, Where Art Thou?. That's the theory, anyway.

An Alexander Payne film tends to change from screening to screening, seeming sharply satirical one viewing and oddly flat the next, but not until The Descendants had Payne made a movie that presented as oddly flat the first time out. It's possible to blame the book for the screenplay's maudlin lapses into mawkish reverie, given how it--despite reviewer comparisons to Roth and Updike--is a longer version of Judy Blume's Tiger Eyes. Less easy to explain is Payne's devolution from a kind of essayist of Nowhere, Nebraska (a celluloid Ron Hansen, why not) into a bit of a traveloguist first in wine country (Sideways), now in Hawaii. You could say that the landscapes are meant as ironic counterpoint to the miserable schlubbiness of Payne's men-of-a-certain-age horror-shows, except they don't have that effect. What The Descendants feels like is a slightly more honest version of A Good Year or Under the Tuscan Sun, in which we gather to collectively but not entirely pretend that George Clooney has an ordinary-looking wife who was cheating on him and trouble managing his children. It's the sort of middle-class fantasy that intoxicates because it allows the actual schlubs--us--to imagine that the pretend-schlub, Clooney, has the same problems we do. There's a considerable gap between Paul Giamatti and Clooney, and an insurmountable one.

Still, The Descendants has a wonderful scene where Matt rails at his wife for cheating on him with a real estate agent (Matthew Lillard--genuinely awesome), of all people, that's bookended by a surprising moment near the end where Matt, in the same aspect, expresses his love and grief for her. They're the only times the movie really works like a Payne film. A talked-about coda where Matt and his kids illustrate life moving along after an unimaginable loss is James Brooks all over, while the theatre of embarrassment where Matt confronts his wife's lover and his wife (Judy Greer--also awesome) is Funny People Judd Apatow. All the rest of the stuff about Matt's bloodline and his newly-discovered allegiance to it in his sudden decision about some prime real estate he's on the verge of losing under the Rule Against Perpetuities has a far less noble, maybe Nora Ephron lineage. It's unfortunate that The Descendants doesn't think to challenge the pat emotional convenience of its source material, choosing instead to sanction it in resolutions that speak to platitudes rather than hard realities. Yes, life goes on, I get that. I also get that people a lot dumber and more sentimental than Alexander Payne could've made The Descendants, meaning The Descendants doesn't just waste my time--it also empties the chamber of an artist who should be making better movies. Originally published: November 30, 2011.