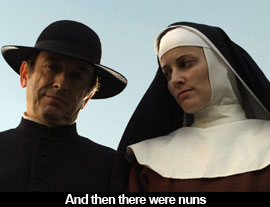 by Angelo Muredda "It would be long and tedious to explain," Adriano Luz's mysterious man of the cloth Father Dinis offers shortly before the intermission point of prolific Chilean director Raúl Ruiz's staggering Mysteries of Lisbon, the fleetest four-hour-plus spectacle you'll see this year. It's not the first time characters promise to explain things later (nor is it the last), their second favourite activity after explaining things now. As promised in an unattributed statement in the title credits, what follows is an amiably digressive "diary of suffering" stuffed with such deferrals and explanations. And a beautiful diary it is. Ruiz, who passed away earlier this year, is perhaps best-known stateside for his lyrical Proust adaptation Time Regained--a nice warm-up, in retrospect, for this even more sprawling and melancholy saga of childhood and loss, an adaptation of Portuguese author Camilo Castelo Branco's 1854 novel of the same name. The fruit of his labours this time is astonishing: an adaptation that's at once deeply reverent towards conventions of nineteenth-century fiction and attuned to their radical possibilities. Ruiz, in other words, finds nothing tedious about these stories, and sees in their mysterious doublings, crude disguises, generational secrets, and grand unmaskings an opportunity to dwell on the nature of storytelling, both its revelatory potential and its artifice.

High-minded as that might sound, Ruiz's greatest coup is his balance of that ambition with a lightness of tone and an offhanded exhibition of his technical mastery. Mysteries of Lisbon traces a number of narrative threads with a studied effortlessness, loosely focusing on the theme of second children doomed to misfortune by accidents of birth, who serve in Ruiz's schema as transitional figures on the brink of remaking themselves in modern Portugal. "In the eyes of the Lord we are all firstborn," Father Dinis tells young orphan João (João Arrais), our narrator, before doling out the story of his parentage. His dictum is the film's humane guiding principle, which gives shape to the disparate stories emerging from that central mystery, involving Dinis himself as well as João's mother Ângela (Maria João Bastos, somewhere between Victorian ruined woman and Madonna) and, for reasons that only become clear later on, a bandit who goes by the name of Knife Eater (Ricardo Pereira)--when he isn't reappearing years hence at posh dinners as a nobleman who calls himself Alberto de Magalhães.

João's complex and doleful origin story, we soon see, is of a piece with the grievous experiences of compatriots in post-French Revolution Portugal, a nation depicted here as the westernmost terminal through which the ruined of Europe stop on their way to either redemption or a bad death. As if this tapestry were not intricate enough, these woes are tonally pitched somewhere between melodrama and theatre of estrangement; actors like Pereira deliver their lines with a cultivated flatness that's both emotionally direct and archly dramatic. It's just as well, as it's implied throughout that the ostensible narrative frame, the diary of suffering, is filtered not only through Father Dinis's highly selective memory but also through João's theatrical adaptation of the overarching narrative of Portugal, peppered throughout the film in interludes with paper actors housed in a diorama.

These multiple layers of irony become dizzying, but Ruiz is not simply showing off--though even if he were, so what? In one vertiginous sequence that's part-Ophüls, part-Visconti, we're placed slightly behind a group of gossiping high-society women scrutinizing a letter in what looks like a cavernous space at an opulent party. Moments later, the camera roams--taking stock of the surprisingly cramped contours of the room--and locates the subject of their gossip, Magalhães, standing only a few feet away in his fitted new coat. Sometimes Ruiz eavesdrops impishly outside a room, hearing an important conversation as the help might, muffled through a doorway. And sometimes he composes an immaculate two-shot of a listener and a storyteller, then pivots around them, pausing as if he's more satisfied with how they look at this new angle, before heading back. It's like he's simultaneously animating a tableau and taking the piss out of the process--namely, this unfortunate but necessary work of framing beautiful things. This aesthetic play with painterly images vaguely recalls the quasi-academic work Peter Greenaway has been doing with the overlap between filmic and visual art in his 'Nine Classical Paintings Revisited' project. But it's also much more than that, a wry manifesto asserting that there are ways to tell a good nineteenth-century yarn without parking the camera before an elegant procession of dresses and top hats.

It's to Ruiz's great credit that the film never really loses steam, even in its more diffuse second half, which traces the romantic and financial misfortunes of half a dozen loveable noblemen and pirates-turned-priests alike. Alfonso Pimentel is perhaps a shade too muted as the adult João, now Pedro, the inheritor of these increasingly convoluted narratives. His final encounter with old Knife Eater seems an arbitrary stopping point, inasmuch as it lacks the operatic charge of the reckoning between Pip and Magwitch in Dickens's Great Expectations (which seems like an obvious reference point, in its union of an orphan-turned-gentleman with a scoundrel made righteous in his later years). Still, it's churlish to complain about such trifles at the end of so playful a masterwork. To repurpose Owen Pallett's tweet about Sufjan Stevens's last album, in which he defended it against charges of overreaching, watching Mysteries of Lisbon is like coming home to find that someone's made you dinner. In Ruiz's case, it's a feast. Originally published: November 11, 2011.