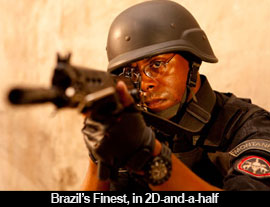 by Angelo Muredda Early in Elite Squad - The Enemy Within (hereafter The Enemy Within) José Padilha's blustery follow-up to his 2007 hit Elite Squad, deluxe cop Lt. Colonel Nascimento (Wagner Moura, Brazil's answer to Mark Ruffalo) promises to give us a history of Rio that happens to coincide with his life story. It's a tall order, but Padilha and co-screenwriter Bráulio Mantovani are ambitious and foolish enough to undertake it, returning to the favelas they brought to boot-stomping life in the first Elite Squad while shifting focus this time from drug lords to corrupt cops. No one would call their work subtle, but they strike a surprisingly watchable balance between Goodfellas-type insider confessional and incendiary political exposé, ditching the tight timeframe and local scope of the original and going for a more sprawling survey of Rio as Hell on Earth. Yet as much as The Enemy Within deserves solemn back-pats for its anaesthetized, everybody's-guilty project, it really takes off in brutally violent set-pieces that forgo neutrality. Cut loose from his earnest ambitions to tell an ambivalent political fable that clucks its tongue equally at anti-poverty activists and conservative law-and-order types, Padilha shows his directorial hand in testosterone-charged gunfights where either all the right people get shot or all the good ones go down as martyrs, and it's the hand of a vigilante sympathizer drawn to the romance of man-to-man violence. Fascist? No doubt. But as ideologically suspect apologies for rogue justice go, this one's pretty well-executed, and at times just plain more fun than the hemming and hawing of The Dark Knight.

The Enemy Within picks up with Nascimento a few years after Elite Squad. Divorced from his dishwater-dull wife Rosane (Maria Ribeiro) and badmouthed to his own teenage son (Pedro Van-Held) as a fascist pig by Fraga (Irandhir Santos), Rosane's congress-aspiring, lily-livered socialist professor of a new husband, Nascimento can take solace only in his renown as leader of BOPE, Rio's ultra-tight special ops force. All is well enough until Fraga spins a botched prison riot that happens under Nascimento's watch as a human-rights disaster and Nascimento is separated from his beloved team (including totally, 100% heterosexual life-mate Lt. Matias (André Ramiro)), promoted to a useless administrative position in the centre of Brazil's broken police force. His cushy new office puts him on the frontline of a more insidious skirmish than the drug war he's been fighting up to now, and the revelations come fast. Soon he's aghast--aghast!--over a predictable conspiracy involving Bill O'Reilly-esque television host and congressman Fortunato (André Mattos) and a slew of deadbeat cops turned militiamen who've wrestled the favelas away from drug lords, instilling their own network of violent justice and illegal cable-TV set-ups. What's a career cop to do when confronted with such corruption?

Nobody ever quite says "this time it's personal," but it's hard not to titter at some of the bombastic pronouncements Nascimento doles out in the generous heaps of voiceover that sometimes turn the film into a video installation. Still, Padilha brings his observational acumen as a documentary filmmaker to a number of virtuosic sequences that put us in the middle of both the procedural order and the chaotic violence of raids. He has a keen eye for how sting operations are meticulously-orchestrated plots that start in schematic diagrams and security-camera footage, then come up against the visual incoherence of unidentified bodies rushing through unmarked spaces. There's real sympathy here for both the organizational grace of backstage planners like Nascimento and the brute-force frontline work of cops like Mathias, as well as an attention to how ethical questions get dropped as quickly as they're raised in a hail of gunfire. That his proper cops are always under such duress and never shown being mundane unethical assholes who, say, pepper-spray protesters, tells us a lot about Padilha's ideological stripes, but point taken: police-work in a warzone is hard.

It's also charged with a borderline erotic love for one's fellow man, sublimated through bro-ish fist-bumps and portentous nods. Whether intentionally or not, Padilha has made the homosocial love story Clint Eastwood keeps threatening to make in J. Edgar. BOPE, as presented in The Enemy Within, is more fraternal society of undeclared crushes than elite squad per se, and a late-in-the-game sequence that finds Nascimento's old brothers-in-arms springing to action on his behalf and uniting over their rallying cry of "SKULL!" is at once incredibly silly and touching. So is the resolution of Nascimento's convoluted narrative, which hinges on an unspoken gentlemen's agreement with Fraga. Theirs, Padilha suggests, is a love triangle--pitched over not Rosane but Nascimento's impressionable son--worth the fate of Rio. Originally published: November 25, 2011.