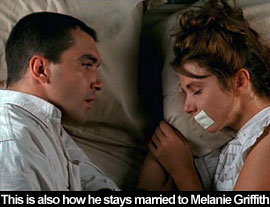 by Angelo Muredda "Don't pay attention to the surfaces," Antonio Banderas's mad scientist cautions maid and unofficial secret-keeper Marisa Paredes as she approaches a cluttered countertop late--or is it early?--in Pedro Almodóvar's latest genre- and gender-hopping melodrama, The Skin I Live In (La piel que habito). It's a joke, of course: the film, whose literalized English title mangles the Spanish pun on habito as both living and occupying, say, an outfit, is obsessed with surfaces and the ambiguous plumbing that supposedly runs deep below the tissue. Trouble is, The Skin I Live In is almost all surface--a beautifully-carved wooden doll without any innards. That the doll should proudly display its hollow centre, which the movie does in numerous winks at its own clever vapidity, is admirable enough. But Almodóvar, never one to shy away from an operatic climax or three, overdoes it even by his standards, turning the last act into a morality play about protecting your integrity--your true, unseen self--against the skin-deep scars inflicted by other people. It's a nice conceit that might have rung true, or at least wrung tears, if the true self in question wasn't a total blank.

While the film is based on Thierry Jonquet's novel Tarantula, the obvious touchstone is a cinematic one, Georges Franju's lyrical horrorshow Eyes without a Face. Here too we have a surgeon, Banderas's Robert, pushed to the brink of medical research for the sake of a traumatized daughter, albeit for decidedly Almodóvarian reasons involving sexual violence and a burned body. From the outset, all we know is that Robert's been keeping a lid on Vera (Elena Anaya), a mysterious live-in patient decked in a flesh-toned unitard. Vera is fed at intervals like a pet or a houseplant by lifelong maid Marilia (Paredes) and screened for Robert's increasingly unscientific interest on a number of HD TVs stationed throughout the house like tableaus. The good doctor, we surmise, is using her as a guinea pig for a revelatory skin-grafting treatment, his rationale unclear until a series of tangled flashbacks take us back to a fateful encounter at a party between his daughter Norma (Blanca Suárez) and Vicente (Jan Cornet), a skittish dressmaker.

Much of what transpires thereafter is patently ridiculous, but that's hardly the problem. Kidnappings, secret parentages, and non-consensual sex-reassignment surgeries are all safely within the provocateur-auteur's wheelhouse, and there's something deliriously charming about how these disparate strands get knotted together. Almodóvar's penchant for camp translates nicely into a bizarre narrative digression that finds Marilia's son, a loutish criminal on the run, breaking into the house in a tiger suit. (It's carnival season, see.) Paredes's longwinded debriefing of this episode to Vera is great fun, too: picture Helen Mirren's revelatory speech from Gosford Park played as farce rather than as deep stuff.

It's only when the film settles into its real story of authoritarian patriarchs tailoring their loved ones to perfection that things start to unravel, largely because Almodóvar plays everything so straight. While many prefer the austere classicism of the director's output since arguably as far back as the Paredes-starring The Flower of My Secret--tellingly, his first collaboration with composer Alberto Iglesias--to his more puerile early films, there's a crudity to much-less-slick trash like Law of Desire that would better suit this material of unruly bodies fitted into nondescript skin sacks. It's fitting indeed that Robert gazes upon Vera's new flesh through the ironic removes of both her seemingly-bare, actually-restrictive outfit and the many screens on which he frames her in the domesticated wild. The picture's aesthetic hews consistently to eggshell white; whenever skin gets manipulated, it's in an immaculately sanitary lab, and it's handled as delicately as wax paper. Whenever blood is drawn, it's by pipette. Though there's nothing wrong, on the face of it, with this obvious alignment of Almodóvar's artistic sensibility--down to the muted, multi-coloured title cards that swoop in just so, as they have in his past half-dozen films--with that of Robert, any flashes of auto-critique are dulled by Banderas's vacant performance: he's little more than a set of aesthetic predilections. This makes Vera the perfect avatar for the fussy art object of The Skin I Live In itself: a beautiful surgeon's dummy with little discernable personality of its own, beyond its master's signature.

Let it also be said that Almodóvar's "all men are rapists" conceit has finally become as insufferable as Stieg Larrson's turgid and fatalistic apologias on the same subject. The director's interest in pathological male appropriations of women's bodies (read: his own) as either dolls to be carved into shape or empty vessels to be inhabited has always sat uncomfortably between critique and resigned sigh. Talk to Her is more or less a Platonic dialogue on the ethics of sinking your love into an imagined receptacle that just happens to be another person, literalized to grotesque proportions by the end. (It, too, might well have been called The Skin I Live In.) But at least it was a dialogue, with Javier Cámara's daft Benigno restrained somewhat by Darío Grandinetti's audience stand-in, Marco. The Skin I Live In dispenses with this counterpoint and suggests that even the Marcos of the world are born clutching scalpels. I suppose you could call it a more honest portrayal of Almodóvar's longstanding woman problem, or a more complete admission of guilt, but it's also lazily self-congratulatory. "The things a madman's love can do," Marilia sighs in the middle of a run-down on Robert's unbidden experiments on another woman in his life. You want to say: "Not much." Originally published: October 21, 2011.

Finding your website was refreshing after a recent vacation in Branson Mo. I have determined that having access to public transportation, sidewalks, close clusters of shops, and activity are a lot more fun that spending time in the car. I live close enough to public transportation in Chicago's suburbs to go downtown twice a week. I am having a hard time figuring out which southern/southeastern USA cities have good transportation, good outdoor city spaces, and extensive sidewalks other than some Texas cities. Please help me or all of my southern vacations will have to be in Austin, Houston or Dallas.