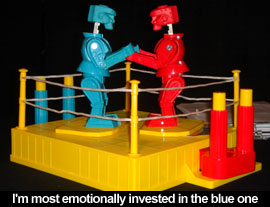 by Walter Chaw There's really no excuse for Real Steel, a Frankenstein contraption made up of spare parts from middle-American fairytales like Field of Dreams and underdog sports intrigues starting with Rocky, I guess, and building all the way through to junk like The Rookie and any number of films just like it that appear with what seems like annual reliability. Set a few years from now, in a world where for some reason people have decided they love to watch giant robots fight each other in place of good ol' primate bloodsport, it has going for it the most bucolic vision of the future since "The Jetsons". Indeed, there are so many gorgeous shots of waving wheat and bilious white clouds that it's fair to wonder if Ridley Scott directed it. Alas, Shawn Levy, the genius behind Night at the Museum, The Pink Panther, and Cheaper by the Dozen directed this cynical piece of bathetic crap and his sticky, syrup-coated paws are all over it, from the movie's flat, unimaginative staging to its absolute inability to be non-didactic in its presentation. (The biggest surprise? That there isn't a flatulent dog around for cheap reaction shots.) Already legendary for how quickly its trailers revealed it to be possibly the worst idea since Buck Henry pitched "The Graduate, Part 2" at the beginning of The Player, Real Steel--the condescension starts with the quasi-inspirational dual-meaning of its title--swiftly becomes legendary in its own right for somehow being exactly as bad as you thought it was going to be.

So Charlie (Hugh Jackman), see, is a not-quite punch-drunk palooka who finds himself in The Future driving a giant green truck and having ex-girlfriend (or something) Bailey (Evangeline Lilly--still a pretty good underwear model for an actress) build robots for him to fight against other robots. He's damaged goods, wounded, hurt by life, when he receives the news that a different ex-girlfriend has died, leaving him in possession of (drum roll) a SON (Dakota Goyo). Before you can say "dig my eyes out, quick!," Charlie has learned something about the fight game from his towheaded moppet--and...wait for it...something about himself, too. There's more. The SON discovers an old "sparring" robot in a junkyard and believes in it because fuck knows, and then Real Steel takes some pains to suggest that the robot, "Atom," is sentient. Blessedly, it forgets that it's taken pains to suggest this, thus sparing us the unpleasant, Terminator 2 voiceover that Atom is a father who wouldn't run away, wouldn't sleep, and wouldn't ever hurt him. The picture doesn't, however, spare us the inevitable closing line in which the SON tells Charlie the same thing he's told Atom earlier, thus forcing us to make the equation--again--as a barely-sentient construct plopped down in the middle of this unholy exercise with the same failed expectation of humanity.

Separating these giant glops of sentiment are robot fight scenes leading up to The Big Fight with invincible, "smart" robot Zeus, designed by snarling Japanese caricature Tak (Karl Yune) and owned by snarling Russian ice-princess Lemkova (Olga Fonda)--except that this self-learning robot is controlled for some reason by dorks with joysticks. Real Steel doesn't even make sense to itself, first positing an environment where tractor pulls and demolition derbies without any kind of human involvement would hold interest for anyone before then confusing itself with what it wants to do with its own premise. It's unbelievably long, unbelievably protracted, stunningly obvious. It's a product-whore for HP and Dr. Pepper and then, when the ads are over, it has the temerity to introduce Hope Davis as a frigid maniac aunt who's eventually won over by this robot boxing thing and the connection Charlie's forged with his estranged little boy.

There are no stakes in the film, ever; it rewards bad behaviour with a ridiculous ending; and when an announcer says that "It's like Charlie's fighting Zeus!," it's actually nothing like that, because there's no chance that Charlie will get hurt. More, it's nonsense that there'd even be something like a "sparring" robot that mimics what it sees: What could the possible benefit of practice be to something that doesn't learn? Real Steel is five moving parts and none of them work in unison, and the real tragedy is that it's not quite bad enough to be enjoyable as an object of absolute derision. Frankly, what I wanted to know was what the black hoods do to the big redneck. Yeah, really--don't ask. Originally published: October 7, 2011.