We Need to Talk About Kevin (d. Lynne Ramsay) 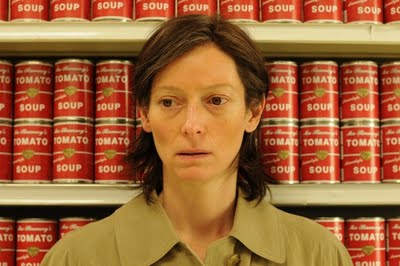 Elliptical, sprawling, transfixed by the natural or at least the pseudonatural (chiefly, food), We Need to Talk About Kevin confirms that Lynne Ramsay is the heir apparent to Terrence Malick in more ways than just her lack of prolificacy. But she shows that his method can be used to more sobering, less transcendental effect. Where billowing curtains are a hopeful, ethereal symbol in The Tree of Life, here they signify death; where Malick has locusts wreak biblical havoc on the farm in Days of Heaven, Ramsay has ants devour a peanut-butter-and-jelly sandwich left angrily smeared on a glass coffee table. Her images, though no less pretty, are all about bringing you back down to earth. She's also more willing to be ironic (Tilda Swinton's Eva Khatchadourian, reluctantly enduring her fifteen minutes, hides from onlookers amidst a Warholian row of soup cans) and blackly comic--I suspect I haven't been with an audience this ashamed of itself for laughing since I saw Happiness, also at the TIFF. Based on the similarly fragmentary book by Lionel Shriver, We Need to Talk About Kevin paints an impressionistic portrait of Eva's purgatory as the mother of eponymous bad seed Kevin (played, at various ages, by Ezra Miller, Jasper Newell, and Rocky Duer), who only shows his true colours when he and his mom are alone together. It's ultimately something of a horrible sign of respect, but is it psychologically acute? The movie doesn't want to deliver any Simon Oakland speeches and I respect that, but in its caginess it effectively recapitulates the plot of Orphan, with a miscast-feeling John C. Reilly as the dimwitted husband making "boys will boys" excuses for his black-eyed offspring until it's too late. The saving grace is that Eva's in nearly every scene, suggesting a narcissistic degree of subjectivity that might account for not only the one-dimensionality of everybody else (including Kevin, who's entertaining but not that much more complex than Damien Thorn when all's said and done), but also the way that trick-or-treaters seem to be menacing Eva personally during a Halloween drive. Not to mention Ramsay's knack for imbuing objects with totemic weight (my stomach churned a little when I saw a guy locking up his bike outside the theatre afterwards), her brilliant song choices (Buddy Holly's "Everyday" scores the aforementioned Halloween montage), or her often inspired use of 'scope, like an overhead shot of a crowd stomping grapes (?) that evokes a microscopic view of cells suspended in blood. Truth be told, when she rhymed this later with an insert of actual cells--breast cancer cells, according to the closing credits--dividing, I felt disappointed, almost patronized. There's still so much to say about Kevin. ***/****
PROGRAMME: Special Presentations