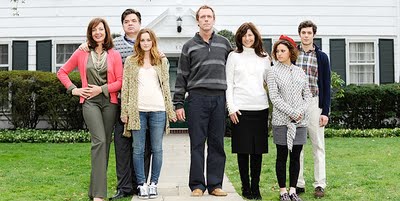 Except perhaps for Hugh Laurie, who tries valiantly but hopelessly to extricate the mannerisms of Dr. House from his American persona, The Oranges feels like it was cast by a computer--why are Alison Janney and Oliver Platt even still willing to read scripts that call for a sardonic homemaker and a schlubby hubby, respectively? Catherine Keener is Laurie's ballbreaking wife, Adam Brody and Alia Shawkat are their ironic offspring, and Leighton Meester is Shawkat's hotter frenemy; what happens is that rather than elevate the material, this archetypal, overqualified cast only exacerbates its familiarity. Distinguishing itself from the rash of post-American Beauty Suburbs Suck flicks with Wes Andersonian title cards (way to think outside the box!), The Oranges--taking its cryptically metaphorical name from the affluent New Jersey neighbourhood in which the film is set--finds two close families rended asunder when Meester's Nina rebounds from heartbreak with her father's best friend, David (Laurie), whose loveless marriage has him sleeping in his "man cave" most nights and counting down the minutes 'til his perfunctory mid-life crisis can begin in earnest. It's the Sundance version of Blame It on Rio, which is to say direly lacking in scenery and titties. It's also the feature debut of a director with lots of "Sex and the City" and "Entourage" episodes under his belt, which is misleading but fair warning nonetheless. */****