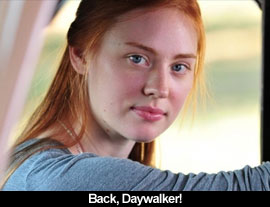 by Ian Pugh SPOILER WARNING IN EFFECT. Bursting at the seams with God/daddy issues but evincing no desire to confront (or even acknowledge) them, Matthew Dean Russell's Seven Days in Utopia is something like a hyper-wholesome, hyper-mainstream response to The Tree of Life. And what do you know? It's awful. After suffering a major breakdown during an important game, disgraced young golfer Luke Chisholm (Lucas Black) retreats to the small town of Utopia, Texas, where he meets an old landowner named Johnnie (Robert Duvall), who just happens to be a former golf champion. Johnnie is willing to teach Luke the ropes and maybe remind him of what's important, i.e., living for yourself and all of that good sports-movie stuff. Putting your faith in the Almighty figures in there somewhere, too, but while the film was made with an unavoidable Christian slant, the problem with Seven Days in Utopia is hardly a matter of ideology. Look past the squeaky-clean landscape promised by its G rating and you'll find it has no ideology at all.

Seven Days in Utopia sets up Luke as the victim of a domineering father (Joseph Lyle Taylor), but this proves a small hurdle to overcome in the blandly pleasant journey to follow. Over the titular week, Johnnie teaches his new pupil a few relevant trades (painting, flying a plane, seeing and feeling and trusting), which Luke masters without much difficulty. Between these cutesy vignettes, Luke comes to blows with the locals over his right to a chaste non-relationship with local girl Sarah (Deborah Ann Woll). Arguments last as long as forty-five seconds in some cases while tragedies take the form of anecdotes about problems long past. Regret is treated as an alien concept. (I suppose that certain lack of conflict emphasizes the moral of the story as being something about the inherent goodness of people (and something else about reading your Bible).) Black is flat here, Duvall is his reliable old self, and both go through the motions before Johnnie gives Luke a special putter with which to win his upcoming tournament. Johnnie tells him he will know when the time is right to use it, and that was the precise moment my audience finally bust out laughing. Can you blame them? Director Russell has plenty of experience as a visual-effects supervisor on movies--ranging from the good (Final Destination 3) to the great (Live Free or Die Hard) to the terrible (Epic Movie)--that explored the nature of clichés, so it's a little difficult for me to attribute this disaster to mere incompetence. It's one thing to recycle the tropes of a well-worn formula and quite another to trot out the exact same lines we've been hearing for decades on end. That kind of laziness suggests a deep cynicism. Ultimately, Seven Days in Utopia has no more respect for its theoretical churchgoing audience than Transformers: Dark of the Moon had for the summer popcorn crowd.

The film's defenders are going to sound an awful lot like Michael Bay's, too: if it has a positive message and gets the job done, why are you being so hard on it? But the movie doesn't have a positive message--doesn't really have a message, period, beyond "Radio London reminds you: go to the church of your choice." It's pap, and Seven Days in Utopia believes its target demo stupid enough to accept it because its values are so ill-defined that it becomes impossible to argue with. The film more or less contends that a belief in God precludes a basic understanding of narrative principles. You're not supposed to guess that Luke will use the special putter to make the final shot in the Big Game--not that it matters one way or the other. Before the ball can approach the hole, we fade out, and Johnnie asks us to consider whether the results are relevant in the face of his student's moral victory. Shortly before the end credits roll, the movie invites us to "continue the journey" through a website. It's obvious that no one cares what lessons you take from this thing; Seven Days in Utopia isn't a movie--it's a trending topic. Originally published: September 7, 2011.