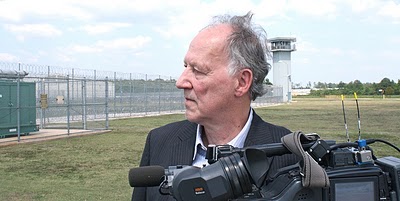 On August 19 of this year, the West Memphis Three--the no-longer-young men railroaded in a triple homicide that left a humble Arkansas town mobbishly seeking justice--were finally released from prison, making Paradise Lost 3: Purgatory, which premiered at the TIFF on September 11, instantly obsolete. (The film reveals their parole in a postscript that feels laughably abrupt after 100 minutes of handwringing.) Where 1996's Paradise Lost: The Child Murders at Robin Hood Hills dealt with the role of religious paranoia in the scapegoating of the West Memphis Three (who were accused of killing a trio of boys as part of a Satanic ritual) and its 1999 sequel, Paradise Lost 2: Revelations, was profoundly if not explicitly about the ineffectuality of the original as an agent of change, Paradise Lost 3: Purgatory is mostly a lot of housekeeping, a refresher course for viewers of the first two films and a lint trap for details about the case that have emerged in the media over the past decade. More a glorified DVD supplement than a documentary, the picture's at its best when it shows how easy it is to work up a head of righteous anger for dead kids by framing one of the fathers of the victims, Mark Byers, as the killer with "evidence" no less flimsily circumstantial than that which was used to condemn the West Memphis Three. (He had priors, his son's death didn't curb his criminal lifestyle--he must have done it!) In fact, Byers is compelled by his moment on the other side of the torch-wielding villagers to write a letter of apology to Damien Echols, the only one of the West Memphis Three on Death Row, whose head he called for back in '93. But by the end of the piece, another of the fathers, Terry Hobbs, has implicated himself in the killings by virtue of suing the Dixie Chicks' Natalie Maines for slander, and Byers hastily commits to this new version of events, drafting a giant pros-and-cons list that seals Hobbs's guilt in his eyes. Hobbs may well be the culprit (the DNA does not work in his favour), but the point is, eighteen years later, nobody has learned to let nature take its course--except the Zen-patient West Memphis Three.

Fast-paced and dense, Paradise Lost 3: Purgatory is bad for the blood pressure (the doddering old occult "expert," who so relishes the spotlight that he has all his various TV appearances scrupulously catalogued on VHS, is particularly infuriating), and as they were preparing to execute Troy Davis last Wednesday evening despite several key witnesses in his trial having withdrawn their testimony, I flashed back to the various men--the lead investigator, the judge, the D.A.--who had too much personal pride invested in the West Memphis Three's conviction to entertain the fallibility of the legal system. And when I learned that they actually did execute Davis, I thought of Werner Herzog's devastating Into the Abyss: A Tale of Death, a Tale of Life. The subject--capital punishment, specifically as it relates to a crime perpetrated in Conroe, Texas a decade ago--humbles Herzog in some ineffable way. His quasi-poetic narration is kept to a minimum and his interview subjects seem both less coached and, with a couple of glaring exceptions, less exposed to ridicule; in one case, Herzog's speaking to a person, Michael Perry, whose last words these will effectively be, and he is clearly not taking the responsibility lightly. The film is quintessentially Herzogian, though, in its anthropological curiosity and curious anthropology, with the father of one of the convicted killers shown to be a felon himself, serving time in the prison across the way. Herzog states in no uncertain terms that he is against the death penalty, but Into the Abyss is less a polemic than a sombre sifting-through of the collateral damage that collects in concentric circles around an execution. Almost two weeks later, I'm haunted by the woman who doesn't own a phone because it only ever brought news of another loved one's demise, by the Death Row supervisor who quit after an inmate casually thanked him, and by Perry's perhaps-madly chipper demeanour. An epilogue provides incongruous and dubious comic relief; I was grateful for it.