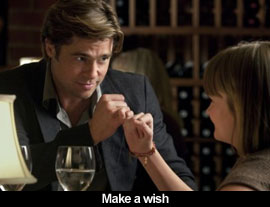 by Angelo Muredda Moneyball arrives after years in development hell with nearly as much baggage as the Oakland A's. A Steven Soderbergh project scrapped at the eleventh hour of pre-production and inherited by a high-pedigree team composed of Capote director Bennett Miller and scribes Steven Zaillian (the lone holdover) and Aaron Sorkin, it's as much a reinvention of the discarded film--apparently pitched as a data-saturated docudrama--as it is an adaptation of Michael Lewis's best-selling non-fiction book of the same name. No matter: Soderbergh successfully redirected his energy into Contagion, a snappy procedural lobbed to the same stats fetishists who might've warmed to his Moneyball, while Miller has delivered an affecting and deceptively conventional baseball movie that works on its own terms. Oscar-bait it might be, but Moneyball is surprisingly fresh, especially in how it shifts focus from the unexpected winners that most sports stories fawn over to a few perpetual losers who live off the wistful fumes of second-place finishes.

The prime loser, as anyone who followed the Athletics' remarkable 2002 run will know, is Billy Beane, played with just the right mix of mania and melancholy by Brad Pitt, matching his excellent work in The Tree of Life from earlier this year. Stranded by limited finances and the prospect of a new season shy of three star players, Beane turns to recent Yale economics grad and low-level Cleveland Indians number-cruncher Peter Brand (Jonah Hill, convincing as the smartest guy in the room and playing a version of former LA Dodgers GM Paul DePodesta) to help optimize his pathetic operating budget. Before he knows it, Brand is bound for Oakland, where his advice is not to break the bank on star replacements but to reassess the potential of the nominal duds to whom they already have access--a theory that rejiggers the team, to the open disdain of surly talent scouts in oversized polo shirts and even surlier manager Art Howe (Philip Seymour Hoffman, in a glorified cameo). The result, once Howe's hang-ups against using the new configuration are steamrolled away, is a 20-game winning streak that briefly puts the A's within striking distance of the best-funded teams in the league. As a baseball novice and a deficient math student, I'm not in the best position to comment on the accuracy of the film's representation of sabermetrics, which Zaillian and Sorkin boil down to the notion that traditional baseball wisdom--"medieval," as Brand puts it--overvalues stars and trivial features like having a "good jaw" and undervalues statistics that translate to actual runs. Suffice it to say, Moneyball converts clunky stats into compelling motifs with unexpected grace, speaking to the uninitiated without insulting its core audience. While Brand's quip that the goal is to cull a winning team from an "island of misfit toys" is tinged with Sorkin's usual glibness, Miller has the visual sense to convey the visionary component of this strategy through more than merely a series of math equations scrawled onto whiteboards--although those are here, too, of course, lovingly rendered in A Beautiful Mind style. Miller, a former documentarian, and Inception DP Wally Pfister, stretching into warmer territory than Christopher Nolan's cool blues, capture on-the-fly moments where Beane's eye scopes out the untapped potential of seemingly defective players. If they linger a bit too long on some of these images (a player with a leg-brace is given little to do beyond signifying wounded), it's a nice conceit, and there's pathos in a scene where Beane explains to the ultimate misfit toy that while he's not a catcher anymore, there may yet be a second career for him as a first baseman.

This bit stands out not least because Moneyball is more interested in management drama than in the dilemmas of its players. Miller's riskiest stroke is to keep off the diamond as much as possible, and for the most part it pays off: Pitt and Hill have great chemistry as backroom dealers whose abiding love for the game comes second only to their commitment to strategizing. The players come across as abstractions in their grand, only faintly intelligible plan--they're filed away in spreadsheets and then rolled out for games we barely glimpse. Though this blunt instrumentalizing of athletes sits awkwardly beside the film's more sentimental inclination to redeem eccentrics who dread even the possibility of contact with the ball, it helps that Zaillian and Sorkin don't judge their leads. Their generosity towards the bigger picture Beane and Brand are hoping to realize has its payoff in an ecstatic comic sequence that finds them cross-referencing charts and whispering over muted intercoms as they frantically trade a handful of key players across two teams in the span of about five minutes.

As successful as this behind-the-scenes drama is, Moneyball is badly served by a number of clumsy flashbacks to Beane's late-teen years as an overvalued scout's dream pick. Hazily shot and lacquered with banal voiceovers from craggy pro commentators bemoaning his Icarus-like ascension and crash, these sequences feel like cast-offs from a less accomplished movie; they're an odd misstep given Miller's wisdom, in Capote, to narrow the frame to a brief period in his subject's career. Clunkier still are two scenes with Beane's young daughter (Kerris Dorsey), a singing prodigy whose twice-played cover of Lenka's 2008 earworm "The Show" briefly tips the film into science-fiction, since it's set in 2002. (Insofar as her song is played in full, Lenka manages to wrangle herself the meatiest female part without having to appear on set.)

It's to Miller's and to Pitt's credit that little of this matters. Bathetic flashbacks or no, Pitt, who also produced, makes a compelling character study out of a restless man raging against his underwhelming conditions and limited talent. Zaillian and Sorkin needn't underline his motivation to the extent that they do ("20 years ago, some scout got it wrong," one contra-Beane cipher tells us in his best theme voice), as it's written on his face, which he's constantly, nervously cramming with whatever food's around. Pitt's twitchy energy has rarely been put to better use: at 47, he seems more boyish and unsettled somehow than the younger actor (Reed Thompson) who doubles for him in flashback. For his part, Miller takes a smart but sometimes overwritten script and tells it without grandstanding, finding emotional currency not in the usual underdog triumph narrative--the big game is completely off-screen--but in the desperate gambits of the perennial runner-up. Originally published: September 23, 2011.