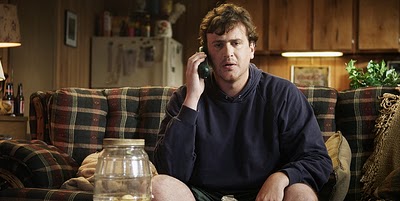 I'm no mumblecore slut and found the two previous Duplass Brothers films I'd seen--The Puffy Chair and Cyrus--to be an off-putting cross between Judd Apatow and Henry Jaglom, but Jeff, Who Lives at Home is lovely. Jeff (Jason Segel) is an unemployed, 30-year-old pothead living in the basement of his widowed mom, Sharon (a surprisingly tolerable Susan Sarandon). He's obsessed with the movie Signs, but the filmmakers seem to accept, rather than ridicule, that it is simply the thing that helped him crystallize his fatalistic belief system, and that if his worldview were less limited by circumstances--namely, depression--he would perhaps have latched onto something more highbrow. When his mother calls him from work demanding that he go buy wood glue to fix a broken shutter, it's the beginning of an adventure-filled day that brings him into orbit with older brother Pat (Ed Helms), a paint salesman whose fears that his marriage is disintegrating are confirmed when he spots wife Linda (Judy Greer, gorgeously lit) having lunch with another man. (In a nice reversal of the reversal of expectations to which sitcoms have conditioned us, she really is contemplating an affair.) Meanwhile, Sharon keeps receiving Instant Messages from a secret admirer at her cubicle; it's a subplot that doesn't quite repeat the theme of interconnectedness but does provide a sweet sidebar as well as a nice comeback role for Rae Dawn Chong, who's hardly aged a day since Commando. Everyone here transcends their typecasting, including slacker balladeers Mark and Jay Duplass, who make a bid for mainstream success (two words: car chase) without precisely abandoning their idiosyncrasies, such as their camcorder- honed/derived aesthetic--which establishes a cinematic grammar that allows for shabby but essential angles like a shot of Segel's hair poking up from behind a vending machine. An opening-credits montage of family photos set to Michael Andrews's lyrical score manages to be uniquely affecting, however conceptually clichéd, while the final scene is an emotional sucker punch that reminds of About Schmidt in how tenderly it pays off a comic thread. A movie about broken people trying their best, Jeff, Who Lives at Home is warm, funny, wise, and only the tiniest bit cynical (two words: car chase), if at all. ***/****