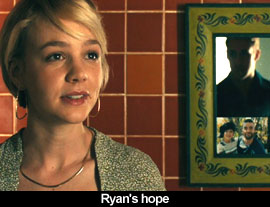 by Walter Chaw The pink, cursive font of the opening credits immediately calls to mind '80s classics like Smooth Talk while the obsessive interest in functionality and work (and Cliff Martinez's awesome Tangerine Dream soundtrack) recalls Michael Mann's Thief, but it's that certain quality of masculine stillness that marks Drive as another Nicolas Winding Refn masterpiece. Its story is boilerplate noir: loner (Ryan Gosling) falls for young mother (Carey Mulligan) and is forced by circumstance to protect her and her son (Kaden Leos) against all the bad men. Drive is, in other words, Taxi Driver if Mann had made it in the eighties, a meticulous character study done in long, drawn-out takes and extended silences punctuated now and again by extreme violence. It's a smart movie--a quintessentially L.A. one, too, in its self-awareness (the nameless hero is a stuntman, Richard Rush fans take note), and it has an extraordinary quality of stillness that paints in confident strokes what it feels like to be completely alone by luck you call choice. A late scene with "Driver" holding himself around the middle, then getting in his car as Refn splashes neon on him and The Chromatics play on the soundtrack is something like a perfect moment in a film indicated by them.

It seems like Drive is going to be a heist movie, but it isn't. It's not an action movie, either. Closer is a romance, better is… what? A samurai picture? There is about it the air of sacrifice and inevitability of a classic ronin story, and viewed in that way it's a lovely companion piece to Takashi Miike's similarly-introspective 13 Assassins from earlier this year. But even that doesn't capture the ineffable sense that Refn has captured in Drive something essential of the doom-laden, apocalyptic eighties to which it owes its greatest debt. A murder in the surf reminds so much of Mann's climactic sequences from Manhunter that it could be a lost scene from that film. It's a picture as well about the romance of restraint in a romantic lead pairing, Driver and Irene (Mulligan, bearing a close enough resemblance to Michelle Williams that the movie takes on a weird, alternate-universe Blue Valentine feeling), that is never consummated save for one magic-realist kiss in an elevator. Homage simultaneously to P.T. Anderson's Punch-Drunk Love and Sofia Coppola's Lost in Translation, but like Refn's other films that pay tribute to sources as diverse as Terence Malick and Jim Jarmusch, Drive builds something new and remarkable from the sum of its referents. Refn is most similar to Quentin Tarantino in that way--a brilliant Dr. Frankenstein, cobbling together something singular from familiar parts.

Against Driver are Jewish mafiosi Bernie (Albert Brooks) and Nino (Ron Perlman); in Driver's corner is mechanic Shannon (Bryan Cranston), who has a plugger's dream of buying a stock car with dirty money and having Driver drive them both to some kind of glory. Some very bad people start hanging out in the shabby tenement hallways and parking garages where a lot of the film takes place, then something goes wrong in Driver's first attempt to help Irene and Irene's suddenly freed-from-prison husband Standard (Oscar Isaac). Perlman is always a welcome presence, but it's Brooks who runs away with Drive as a character so loathsome it'll be hard for me to go back to his roles in Broadcast News and Lost in America without checking their corners for traces of Bernie.

It's devilishly difficult to pin Drive down (note its disastrous marketing campaign), but a good try would be to focus on its absolutely convincing performances, or on a bit where Driver and Irene try to prolong the good day they've had together by staring at each other with goofy expressions on their faces. Refn holds on them...and holds on them...and holds on them...until we recognize ourselves in them and the tentative way they keep looking at each other, and finally Refn turns away. Mysterious and apocalyptic, Drive is brilliant technical and emotional filmmaking, a movie about a period of movies that's also about a style and, most surprisingly, at the end about how dumb it is to love someone and how we can't help but do it anyway. There's a moment where Bernie, after refusing to earlier, finally shakes Shannon's hand. Shushing him, he tells Shannon that it's finished, that there's no more pain. I've been thinking about Drive every day since I've seen it. I can't wait to see it again. Originally published: September 16, 2011.