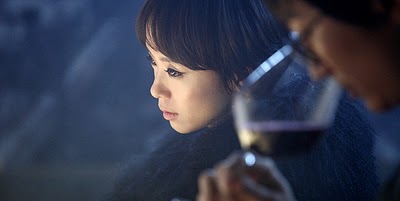 Speaking to my new friend George after a screening of the stylish but gratuitously long South Korean export Countdown, I said, "It was a good yarn, at least. It reminded me of the kind of thing Hollywood used to do and do well." "Yes, you can just see Bogie in it," he replied. Then, almost in unison, we both added: "Only the Bogart version would've been over in 90 minutes." Tae (Jung Jae-young) is a debt collector who receives a terminal diagnosis of liver cancer after passing out in traffic. Since his best hope is a transplant, he puts his skills to use tracking down the recipients of his dead son's organs: knowing their blood type will match his own, he hopes to guilt one of them into a reciprocal donation. Finally, he locates Cha (Secret Sunshine's luminous Jeon Do-youn, surely bound to be poached by the American studios any day now), the con woman who got his son's heart, and she agrees to give up a piece of her liver if he'll provide in exchange the whereabouts of a criminal kingpin on whom she seeks revenge. Underestimating her slipperiness, the increasingly weary Tae spends a frantic couple of days pursuing and protecting Cha in equal measure. What I haven't belaboured, which first-time writer-director Huh Jong-ho most certainly does, is the significance of the dead son, a Down syndrome sufferer whose final moments were captured on audiotape, thus facilitating Tae's poignant self-flagellation. Parallel climaxes and multiple endings all wallow in this kid's death--you'd think he were a real-life martyr--to the point of total desensitization. (As an aside, I can't remember the last movie I saw with this many psych-out fade-outs. The Return of the King, maybe?) But there's another casualty of Countdown's detour into bathos besides the film's cool allure, and that's the accountability of Do-youn's character, a true sociopath falsely redeemed in the tide of sentiment. *½/****