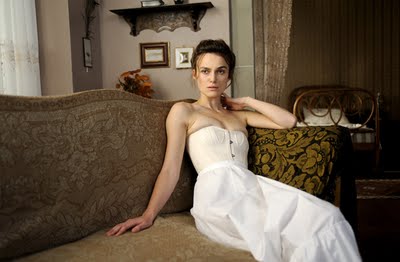 I wish David Cronenberg would direct a script of his own again. A Dangerous Method is recognizably Cronenbergian in its careful anthropology (DePalma-esque, too, in its frequent use of the split dioptre), but it's also a hit-or-miss period talkfest, identifying it as a Christopher Hampton adaptation of a Christopher Hampton play through and through. Distilling all the expected body-horror in grotesque and painful-looking contortions of her jaw, first-billed Keira Knightley does fine if exhaustingly histrionic work as Sabina Spielrein, a patient of Carl Jung's (the ubiquitous Michael Fassbender) who becomes his apprentice while in therapy. Jung corresponds with the more popular Sigmund Freud (Cronenberg muse Viggo Mortensen, ingeniously cast against type) over Sabina's case as well as his own neuroses, and Freud eventually tosses another patient Jung's way, protégé Otto Gross (Vincent Cassel), whose maverick disregard for the ethics of transference and countertransference ultimately influences Jung's decision to embark on an affair with the sexually-repressed Sabina. On some level, A Dangerous Method is Cronenberg's first out-and-out comedy, and though a few of the laughs are of the historically-superior variety, more still are born of the characters using psychobabble to rationalize their every surrender to their urges. (Also funny: that Freud is never not smoking a cigar.) Which is not to say the movie is especially satirical or irreverent. Indeed, the dense debates that blossom between Jung and Freud as the former attempts to broaden the latter's horizons beyond the psychoanalytic movement reveal a passionate respect for the work of these men, if an ambivalence--to borrow a Freudian term--towards their differing points-of-view. (The split dioptre is generally employed here to keep both Jung and Freud in focus.) Unfortunately, things get a little bit repetitive and tedious, culminating in an ending that feels somewhat arbitrarily placed; as much as I love Cronenberg, I was going to suggest that this stagy material might've benefited from a showier director--but then I remembered Julien Temple's Pandaemonium. ***/****
PROGRAMME: Gala Presentations