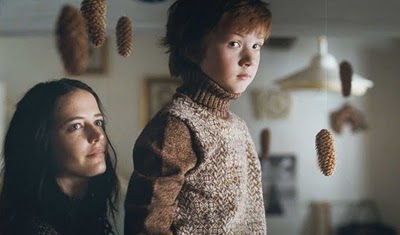 I found the imposed misery of Never Let Me Go a lot less provocative and haunting than the self-inflicted kind one encounters in Benedek Fliegauf's Womb, whose one-word title seems to not-unduly affiliate the picture with Jonathan Glazer's great Birth. I love this movie, but it took me a few days to digest it, and I'm not sure I'd have the patience to sit through it again. It's challenging from the get-go, what with the quasi-kiddie porn of its opening sequences, in which a beautiful young boy and girl start sleeping together, and the girl caresses her skin, then the boy's, as if trying to decipher some message between them written in Braille. (For pure eroticism, though, nothing trumps the pair watching a snail writhe across a kitchen table--and it's here that I wish I possessed Walter Chaw's vocabulary for discussing suggestively Romantic images such as these.) The girl, Rebecca, moves to Tokyo, and grows up to be played by Eva Green. She returns to the little beach community where she met the boy, Thomas (Matt "Doctor Who" Smith as an adult), and looks him up, having transparently spent the intervening years pining for him. When they meet again, he's so thunderstruck that he dumps his current girlfriend on the spot, and the two impulsively begin a life together as eco-activist--an amateur entomologist, he breeds cockroaches, speaking to indelibility and infestation--and muse. Just as suddenly, Thomas is killed on the way to a protest, and Rebecca, feeling cosmically robbed, has and implements the lunatic idea to be artificially inseminated with Thomas's clone and cultivate in the child an Oedipal complex, so that at some point in the future she will get to be with a facsimile of her lover, even if he is, technically, her son. What ensues is a distaff Lolita that makes up for in controversy (the incest angle) what it may lack in guts (all things considered, this is a fairly chaste film), though the Zen patience with which Rebecca courts Thomas II only affirmed the intelligence of the piece for me: you're just not going to see a woman exhibit the immoral lust of Humbert Humbert with the same urgency.

Beneath its sensationalistic hook, Womb is also solid pop anthropology, with Rebecca recreating original Thomas's environment as much as possible in the hopes of raising a true clone but finally bringing up someone who is, unlike his "father," unmotivated and kind of an idiot. (Though she appears to enjoy fucking him too much to care, new Thomas's girlfriend (Hannah Murray, who has the sexiest overbite I've ever seen--writer/director/composer/sound-mixer Fliegauf has an eye for carnal mouths) hits the nail on the head when she calls him "juvenile.") There are simply too many variables involved in how a child turns out, not the least of which the human soul. That none of this is actually put into words by the filmmakers shames Never Let Me Go, which wheels Charlotte Rampling out like Blofeld to speculate about souls in genetically-engineered individuals. Green is fabulous, by the way, a woman for the first time on screen and walking a tightrope with aplomb. There's ambivalence in her maternalism that's exactly right; accepting her predicament requires a huge suspension of disbelief, but she believes it first. ***1/2/****