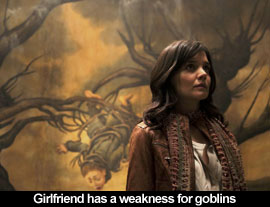 by Walter Chaw There are so many opportunities squandered, so many set-ups dishonoured, so many promising moments clearly assembled into incoherence in the editing bay, that it's kind of amazing how Troy Nixey's Don't Be Afraid of the Dark still manages to coast along on its monsters and its lovely, gothic atmosphere. It's not a good movie, but it's a good time, for the most part--the part where you're not thinking about how irritating it is that in movies like this parents are constantly leaving their children in peril. Produced by Guillermo Del Toro, the picture feels an awful lot like another Del Toro production, 2008's The Orphanage, which also provides solid atmosphere, a couple of gross-outs, and an overall feeling of pleasant well-being. The major difference is that Don't Be Afraid of the Dark is so disjointed and spotty that the predominant aftertaste is frustration. What a shame.

It's a shame particularly because it starts out well, what with a bloodied Eldritch painter named after Algernon Blackwood lurking in his basement, where, it will later be revealed, he's been doing paintings based at least in part on the writings of Arthur Machen. It's all so delightfully Lovecraft-y, isn't it? Things turn Raymond Feist-y once it becomes clear that Machen's evil elder-fairies are actual living creatures that hunger for children's teeth and are thisclose to talking like Gollum in the saga for which Del Toro is no longer directing the prequel. Jump to the modern day as architect/house-flipper Alex (Guy Pearce) and his girlfriend/interior designer Kim (Katie Holmes) are saddled with Alex's daughter Sally (Bailee Madison) for a metaphor about how children of broken homes need to feel wanted. Alex is the prototypical workaholic daddy and Kim is the prototypical younger mom-replacement the kids resent until they don't, and it takes most of the film until creepy Sally's creepy drawings surface and Kim visits a grizzled old caretaker and then the local library.

Until such time, a group of little grey gremlins promises Sally they'll be her friend if she releases them from a boarded-up fireplace in a boarded-up basement to run amuck in all that beautiful production design. Don't Be Afraid of the Dark has a lot of nice suspense moments with bare feet walking next to things under the bed and sharp objects getting poked at eyeballs. There's even a fun centrepiece in a bathtub that doesn't make a lot of sense but does escalate the innate terror of being menaced when you're most vulnerable by making the victim a child. I did wonder about a working Polaroid camera that takes real, no-kidding pictures of the beasties Nixey subsequently decides he doesn't want to show, while a scene in a library that ends with the amputation of a gremlin arm doesn't lead to any revelations or fun character reversals. Worst is the Kim character (and maybe we hold Holmes's performance somewhat accountable), who vacillates arbitrarily from believing Sally completely to not believing her and back. When the audience is making a better film in its head at the same pace you're screwing yourself into a little ball, you've got problems.

None of it would be as painful, though, if the pieces weren't so intoxicating. Some of the images--bright eyes tracking a child from floor-grate to ceiling duct, for instance--are delightfully perverse and sticky, and the picture's climax, featuring a surprising moment of uncomfortable gore, is pretty awesome, even though the conclusion complicates it all with a ridiculous bit of lore. Don't Be Afraid of the Dark, a remake of a fondly-remembered TV movie, is immanently stylish but saddled with a ten-cent head. As a Del Toro fan, I wish he'd just make another movie himself. (I really wish that his long-gestating adaptation of Lovecraft's At the Mountains of Madness would finally get the go-ahead.) Projects like Don't Be Afraid of the Dark and The Orphanage and Splice speak to me of sparks of ideas that Del Toro maybe understands aren't going to develop past novel diversions. Yet he's so much the genre enthusiast and benefactor of the kinds of movies he likes that he wastes his time fostering stuff like this instead of working on his own genuinely transcendent material. It's not awful, this Don't Be Afraid of the Dark, but the world is already full-to-bursting with not-awful. Originally published: August 26, 2011.