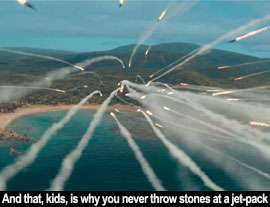 by Walter Chaw The half of Matthew Vaughn's X-Men: First Class (hereafter X-Men 4) involving Erik "Magneto" Lensherr (Michael Fassbender) and Professor Xavier (James McAvoy) is spellbinding pulp; the other half is puerile bullshit. The starkness of that division is evidence of a screenplay with six credited authors, expectations of a franchise that went astray when it abandoned Bryan Singer (as all potentially great franchises seem to abandon Bryan Singer, to their detriment), and a director who's capable of giving good genre (Kick-Ass) saddled with material that's at least fifty-percent garbage. Start with the good in an Auschwitz prologue that handily reclaims Magneto's origin story from that idiot Brett Ratner's X-Men: The Last Stand while introducing energy-absorbing supervillain Sebastian Shaw (Kevin Bacon), the future-leader of the Hellfire Club, which includes among its members Emma Frost (January Jones, eternally in lingerie--not that I'm complaining) and teleporting Azazel (Jason Flemyng). Shaw plans in the present day (1962) to engineer nuclear war via the Cuban Missile Crisis, and it's up to an avenging Magneto and bookish Professor X to stop him. Unfortunately, the team they assemble is composed of a few non-descript punks with stupid mutant powers (the one who "adapts"; the one who screams; the one with little fairy wings; oh, and Beast (Nicholas Hoult), the one who's smart and has prehensile feet) whom Vaughn puts through the paces of frat/sorority shenanigans. CIA agent Moira McTaggert finds another way to waste Rose Byrne, and then there's a young, image-tortured Mystique (Jennifer Lawrence), who carries the load of the "mutant and proud" trope Singer pulled off so intimately and effortlessly.

Whenever X-Men 4 explores Xavier and Erik's relationship, there suddenly appears a depth of humanity, and the action sequences revolving around them have real excitement in their scope and execution. The trailer-spoiled sequence of Magneto lifting a submarine out of the ocean isn't just pop spectacle (though it's wonderful pop spectacle)--it's the culmination of a scene in which Xavier has given his friend the gift of serenity in his half-remembered past. It's another shot after films like The Tree of Life and, yeah, The Hangover Part II in which reflections and dreams are mined for poignancy and revelation. It also clarifies the emptiness of the vengeance the Holocaust-broken Magneto seeks like some superpowered Simon Wiesenthal in scenes that take full advantage of the Inglourious Basterds reputation preceding Fassbender. But then you have Shaw and his hoochie sidekick manipulating the horny, venal Russians (the popular bumbling Bolshevik stereotype since long before One, Two, Three), as well as the attempts of the pint-sized, pubescent superhero squad to find their voices and learn to fly. It's tedious stuff and frustrating at least once, when Mystique shape-shifts into the form of someone she's never seen, much less seen wearing a certain iconic helmet. Fanboy stroking at the expense of narrative coherence is the worst kind of pandering.

And yet, for every nonsense visit to a strip club paid off by a stupid, TIGER BEAT-power line like "I'd rather men look at me while I'm naked than like they are now," there are McAvoy and Fassbender to save X-Men 4 and offer a glimpse of what it could've/should've been. (Fassbender's performance as Magneto, in fact, makes me feel how I wanted to feel about Anakin in any of the Star Wars prequels.) Insult to injury: for all the violence in the picture, to garner the most box-office-friendly rating, there's no hint of actual blood or visceral carnage to lend consequence to something that, after all, opens in a concentration camp. The two directions in which the film is pulled, then, are the need to make a gazillion dollars and the desire to say something interesting about friendship, idealism, and the eternal struggle between being high-minded and becoming der Führer. That Magneto's contention that "identification" is the first step towards bigotry and, eventually, extermination carries so much weight despite the relative briefness of the character centre-stage speaks volumes about what Vaughn is capable of--just as the rest of it demonstrates what he is not. I do wonder if X-Men 4's bad bits seem so bad simply because there are moments in it so good. I wonder, too, if there'll be a Magneto spin-off with Fassbender, because, frankly, that's the only sequel this movie deserves. Originally published: June 3, 2011.