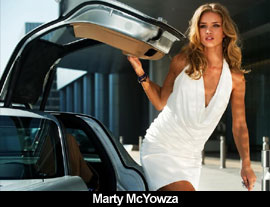 Perhaps it's time to have this conversation at some level of our culture that going into a movie deaf and blind to messages like "women are things" and "Arabs are evil" and "African-Americans are scairt" is exactly what Bay and his co-producer Steven Spielberg (for shame, man) want you to do, hope that you do, because imagine what would happen if anyone with any kind of infant moral compass were to notice that they've taken their 9-year-old to a movie this ugly and hateful. It's wrong to say that Transformers: Asshole is naïve when it blames Chernobyl on a gaggle of "what a country!" nitwit-niks trying to start up an Autobot power cell, wrong to believe that Bay's insistence on leering on every woman in the film except McDormand (whom he has John Turturro sexually harass during the closing credits anyway for an old-person rimshot) is innocent, upskirt-camera fun. No, the truth is that there's a method to this shit, a blueprint for dehumanizing every single person except Sam and his human archenemy McDreamy (Patrick Dempsey), making the near-levelling of Chicago the fallout of their sexual jealousy. This rivalry plays out against glowing steel phalluses employed in gibberish gobbledygook conjured by illiterate screenwriter Ehren Kruger to teleport a planet into Earth's atmosphere. And why would these robots want to smash their planet into Earth? Never mind, stop thinking. Thinking is pretentious, and Transformers: Asshole is good, all-American, Patriot Act and Internet-smut fun that will send your handsome white sons off to die in war, armed to the teeth with all the metal-fetish, extreme xenophobia, and sexual frustration this film can pump into them. It's war propaganda for the twenty-teens; the rape-justification is just Chantilly. Remember the girl getting an Autobot money-shot in the previous film? This time she gets threatened by a dozen tentacles that, prior to doing whatever it is they intend to do, play with her hair and smooth her cheek. No harm, no foul.

Transformers: Asshole also represents the end result of the criminal disrespect introduced by Forrest Gump way back when, allowing a genuine moron like Bay to digitally mess with actual historical figures and footage. It's like Sarah Palin's camp trying to change WIKIPEDIA after their mistress revealed her alternate history of Paul Revere. Here, Bay essays the Moon Landing and tosses a few bucks at the real Buzz Aldrin to make a cameo, not really understanding or caring about the effect this sort of thing has on the power and sanctity of American mythology. When we're accused of having no history, it's because of people like Bay and Palin, who, never having been blessed with curiosity, are curiously free of shame. The third or fourth film this year already to talk about a devastating alien invasion and the slaughter of its population (though the first to overtly try to pull said aliens into an immigration/terrorism allegory), Transformers: Asshole holds the distinction of being the first movie this year I'm actually ashamed of. In it, I recognize every failing of we the people, paraded before us as though they were virtues. The country represented by this film is bellicose and ignorant. Comparing the projected grosses of Transformers: Asshole and Tree of Life highlights just how clearly Bay and his legion see things as they really are. It's unspeakably depressing.

For the record, the robot-on-robot action is still impossible to follow (especially during a throwdown between four silver bots that comes off as a flurry of bytes and decibels and little more), and the rationale for the good guys steadfastly refusing to transform into something useful while negating their fair-play defense with a bristling armoury holds fast for the purists. The dialogue is execrable, the comic-relief robots and the comic-relief parents (including Sam's mother, who speculates about the size of her son's penis) no less so, and a couple of nifty production-design moments, like the alien carrier that looks like the underside of a cockroach, are swallowed up in Bay's visual noise. There's a snake-bot that would be cooler if it ever did something that made evil sense, and there's Leonard Nimoy voicing something called "Sentinel Prime" in the sad realization that eventually everyone needs to pay the rent. It's too easy to say that Transformers: Asshole is the worst film of the year, because Transformers: Asshole is more dangerous than bad. The world is full of bad movies, after all, to the brim. (Even that golden year, 1939, produced at least 400 pieces of shit no one ever talks about anymore.) But the lasting legacy of this film will be that it redefined the uselessness of the MPAA ratings system; begged the question of how much hatefulness is permissible in our popular entertainment before someone says something; and caused too few people to scratch their heads in helpless dismay before this wholesale disrespecting of an entire country and its people. Ours. Originally published: June 29, 2011.

This movie was the weakest of the three movies, and the other two weren’t very strong at all. Michael Bay did make an interesting tragedy trilogy; it was a tragedy that we had to watch them all at some point. The script was weak, the acting was weaker and the only nice part was the CGI. I finally sat down to watch this butt numbing movie when I saw it on the Epix page at Dish Online. I thought movie theater chairs were uncomfortable, my office chair during a bad movie is even worse. Although when I told a movie buff I work with at Dish about my dislike of the film, he turned his nose up to me and walked away. I guess someone was bound to like the mess of a movie.