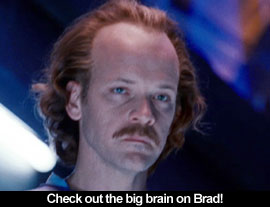 by Walter Chaw Martin Campbell's Green Lantern is just awful. It's a mess, a boring mess, featuring boring Ryan Reynolds in a skin-tight green super suit (and not-boring Blake Lively, not) trying to "grow up" and accept the responsibility of becoming an intergalactic Dudley Do-Right--a titular "Green Lantern," which in the DC UNIVERSE parlance apparently means that you say crap about will being stronger than fear and manifest a giant Matchbox race set as the best way to save a crashing helicopter. Cool? Cool if your concept of cool is The Last Starfighter as written by Tony Robbins. There's just so much empowerment going on in this thing, and unresolved daddy issues that are raised without any clue as to how to parallel the dysfunction in the characters or honour what is fast turning out to be this year's driving thematic force. It's no wonder, really, that the bad guy in this one is a giant mess of cosmic goo called "Parallax": the picture jumps around from one point-of-view to another with no sense to bridge the turbid gulfs between them. Worse, Green Lantern's threat to go the ambiguous, Dark Knight, fight-fear-with-fear route fails to materialize in the loudest possible way with an unintentionally-hilarious nonsense soliloquy delivered before a council of detached Kuato. I didn't think I'd see a movie this bad before Transformers: Euphemism for Asshole docks next month.

Yes indeed, to tide you over, here's Ryan Reynolds as test pilot Hal Jordan, given access to The Power Galactic, a.k.a. The Power of Will!, with a very non-Nietzschian, non-masculine (let's face it) ring and matching radioactive lunchbox that clothe him in an airbrushed suit, gift him with flight, and allow him to produce energy versions of giant green fists. It's no wonder that DC was always Marvel's weak sister, huh? Green Lantern also has a mask Hal's girlfriend Carol (Lively) sees right through in the movie's only mildly vibrant scene, and an arch-enemy in Dr. Hector Hammond (Peter Sarsgaard), who is infected with Fear!, making him telepathic and able to throw bullies around when he gets mad. Oh, and his dad is played by Tim Robbins. As Hal questions whether he can save the planet with his new powers, Dr. Hammond turns into Rocky Dennis by way of Dr. Strangelove. He's the not-exactly-conduit to Parallax (voiced by Clancy Brown), who in one wholly inappropriate but still boring sequence "eats" a few dozen civilians running from an odd but probably unintentional 9/11 reference. None of it makes much sense within or without the fabric of the picture, ultimately, as Green Lantern fights evil-I-mean-Fear, gets hurt arbitrarily, doesn't get hurt arbitrarily, wins, loses, gets girl, loses girl... You want to blame the editors or the writers or Campbell or the actors, but truly there's enough blame to go around.

Imagine, if you can, a moment on the Green Lantern planet where, during the de rigueur training sequence in which Hal learns to use his powers, he decides to conjure up an energy sword because, as a test pilot, he's a wonderful...fencer? Or the revelation that his drill sergeant is a massive alien named Kilowog and voiced, wait for it, by Michael Clarke Duncan, because what Duncan is good for is playing giant aliens in stuff like this, Tim Burton's Planet of the Apes, and of course The Green Mile. Nice. I also like when scientist Dr. Amanda Waller (Angela Bassett) has her memories of Cabrini-Green and ghetto-crime raped by Dr. Hammond before getting flushed down a proverbial green energy toilet. It's a potentially interesting moment in a film not equipped in the slightest to deal with it, nor with patricide, nor with the military-industrial complex. And before one declares that as summer entertainment, Green Lantern has no responsibility to coherence and can kick over as many sticky anthills as it wants to, consider that even jumbled garbage like Iron Man 2 at least took pains to take swipes at the issues its premise would naturally raise. That aside, Green Lantern is also a terrible action film, a terrible romance, a terrible waste of life. The best part of the screening, in fact, occurred during one of the movie's interminable dialogue sequences when someone yawned audibly from the middle of the packed, restless theatre. As critiques go, there's real eloquence to that kind of devastating simplicity. Originally published: June 17, 2011.