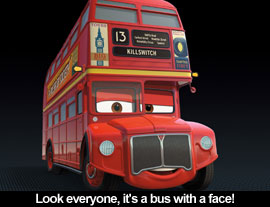 by Ian Pugh SPOILER WARNING IN EFFECT. Trading the '50s Americana of the original for '60s British adventure, Cars 2 seems, for a moment there, like it might actually work. The inhumanity that Walter Chaw correctly attributed to Cars scores a few subversive points in this sequel, filled as it is with complicated stunts that are, amusingly, impossible for automobiles to perform. (Even sillier: all of the anthropomorphic spy cars are retrofitted with Gatling guns and assault rifles.) But all is lost as tow-truck hick Mater (voice of Larry the Cable Guy) takes centre-stage in a convoluted espionage scheme, meaning that Cars 2 stoops to the same mistaken-identity spy parody that children's movies have beaten into the ground since 1966's The Man Called Flintstone. The subversion runs completely dry after the pre-title sequence, as our resident Connery (?) Finn McMissile (Michael Caine) jumps and shoots his way across oil derricks, only to hand over the reins to the blander heroes of the previous film. So the same old car jokes prevail as Pixar keeps shovelling coal onto a dead fire. Find one more extraneous character in Finn's liaison Holley Shiftwell (Emily Mortimer), whose primary function is to prove that Bondian double-entendres don't have much impact when everyone's name is a double-entendre.

The MacGuffin is a clean-burning fuel developed by Richard Branson analogue Miles Axelrod (Eddie Izzard, sounding an awful lot like Bill Hader's Branson), who has decided to test the stuff in a series of races set in Tokyo, Rome, and London. This doesn't sit well with some oil-company cronies who have developed an electromagnetic pulse designed to blow up gas tanks. Some sensitive information is transferred to Mater as he is confused for "the American agent;" it ain't much to go on, but then you don't need much for the hour-and-a-half of redneck comedy to follow. Meanwhile, Lightning McQueen (Owen Wilson) is more or less out of the picture, racing against an Eye-talian speedster (John Turturro) in a minor subplot that feels like a toothless riff on Talladega Nights. For what it's worth, the action sequences remind mostly of Brosnan-era Bond--which is to say, they're cluttered with a lot of empty noise and gimmickry.

Comparing Cars 2 to its predecessor initially feels like a zero-sum game (both are equally tiresome), but the sequel comes out worse by becoming a paean to Ugly-American entitlement. When McQueen chastises Mater for his obnoxious behaviour in Japan, the film somehow interprets this as a suppressive act; if the message "be yourself" includes "feel free to act like a screaming moron in a foreign country," maybe it's time we took a step back from these kiddie-movie morals to understand what "being yourself" really means. (It must be said that there is an uncomfortable tenor of cultural superiority as the Americans make their way through wacky-ass Tokyo.) Furthermore, Cars 2 builds on the uncomfortable racial undercurrent of Cars, as the culprits behind everything are revealed to be "lemons"--the various brand-name clunkers who are tired of being looked down upon by their properly-functioning brethren. Since the Cars universe appears to draw its ethnic distinctions based on make and model, how are we to interpret its version of an oppressed minority? It's indicative of a shopworn plot so desperate for a villainous Other that it can't properly develop the rules to its own game. Most of Cars 2 runs on that same desperation, the film's ungodly length (113 minutes) propelled by clichés stretched to breaking point and a few empty nods at green energy. There's no real mystery as to why Pixar made this thing (it's studio head John Lasseter's baby, and nothing the company's released has come close to matching the grosses of Cars in terms of ancillary revenue), but it still ranks as their greatest disappointment. Originally published: June 24. 2011.