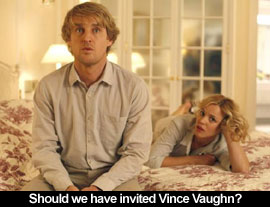 by Ian Pugh Midnight in Paris begins with a Manhattan-esque montage of the titular city, and after so many consecutive duds, Woody Allen has finally rediscovered (and relocated) the vital essence that traces back to his very best films. Don't mistake his latest for a nostalgic throwback, though--in fact, it's something of an essay on the dangerous intoxication of nostalgic throwbacks. Take it, too, as fair indication that Allen has shared our frustrations with his recent output and knew that the only way to get out of his rut was to confront the spectre of his earlier work. While he probably hates himself for it, it was bound to happen sooner or later: The pull of the past is simply too great to resist. Here, Manhattan becomes Paris, Paris becomes Manhattan, and we're left to wonder what, exactly, that's supposed to mean in the long run. Allen projects himself onto a younger avatar, who in turn projects himself onto the artists who came before him, who in turn have their own projections to deal with. As usual, Allen stops the action cold to explain his theses in a brief monologue, but for the first time in a long time, it feels necessary. It feels like legitimate self-criticism.

Hollywood screenwriter Gil (Owen Wilson) is struggling through a novel, convinced that he would've seen greater artistic success had he sacrificed the big paydays for a little more time spent daydreaming in the City of Lights. He returns there for a mini-vacation, and after several frustrating nights in the company of selfish fiancé Inez (Rachel McAdams), Gil wanders alone in search of inspiration. On a random street corner, he's picked up by an old-timey car and transported to 1920s Paris, where he meets a who's who of the era's cultural elite: F. Scott Fitzgerald (Tom Hiddleston), Ernest Hemingway (Corey Stoll), Salvador Dalí (Adrien Brody), Gertrude Stein (Kathy Bates), and what seems like every other major artist of the early twentieth century. Naturally, they love his gaping naïveté and (obnoxious) hero worship. He gets to show off his work to some pretty big names and maybe even enjoy an affair with resident muse Adriana (Marion Cotillard), though as these excursions continue, they demonstrate little purpose beyond fulfilling the writer's desire for self-gratification. (In a brief stay back in his own reality, Gil uses his newfound historical knowledge to take the piss out of a pompous, wannabe art critic (Michael Sheen) with eyes on Inez.) Would it have been possible for someone to meet all of these artists in the same place in such rapid succession? More importantly, does Gil make any real progress on his much-ballyhooed novel? It doesn't really matter, because if he's getting all this attention from these idols, well, he must be a good writer.

Gil's superficial interactions in yesteryear mirror his relationships in the modern day. If we are to conclude that Inez is wrong for Gil, then we must also ask why they got engaged in the first place. Early political conversations with his future father-in-law (Kurt Fuller) reveal an unwillingness to engage opposing viewpoints, while Gil's flirtation with a local merchant (Léa Seydoux) only seems to transpire because he thinks the romantic setting demands it. "'Prufrock' is my mantra," Gil says upon meeting T.S. Eliot, unaware of just how well he embodies that poem as an aging romantic, an interloper gawking impotently as the women come and go, talking of Michelangelo. The entire thing is an exercise in intellectual tourism and impossible fever dreams (as all art may be, the film's wink of an ending suggests) Allen understands only too well. Ultimately, Midnight in Paris is about the struggle to figure out where the "true self" emerges from a cacophony of influences and preconceived notions of an unlived past.

In other words, the film follows through on the career retrospective Allen promised with Whatever Works. He recognizes nostalgia as poisonous to his craft, yet at the same time, he can't suppress his curiosity over revisiting his old stuff. In the movie's funniest moment, Gil pitches The Exterminating Angel to a confused Luis Buñuel (Adrien de Van), and suddenly Woody appears overly concerned about what Bergman and Fellini thought about his own pastiches of the same. (Does he feel differently about them, and their impact on him, now that they're dead?)) Armed with the appropriate time and distance, Woody takes a good, long look at his career and the man he used to be, and despite decades of denial, he betrays his desire to understand what he has accomplished and what he'll leave behind. Does he regard his younger self as a separate entity? What has he really learned in his career as an artist? Thankfully, unlike his last few films, Midnight in Paris actually explores these themes and lets enough questions linger to keep it interesting. It's almost as if Allen decided to punish himself with the power of true introspection. After all's said and done, it's not hard to imagine him traveling back in time to visit his much younger self--a much more persuasive artistic force--to tell him how much he loves his movies... particularly the early, funny ones. Truly, we have come full circle. Originally published: May 20, 2011.