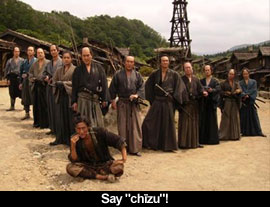 by Walter Chaw 13 Assassins, Takashi Miike's costume-period retro-cross-cultural updating of Sam Peckinpah's The Wild Bunch (and more horizontal homage to obvious antecedents by countrymen Kurosawa, Kobayashi, and Chushingura), initially seems a surprise choice for someone who's made his name (80+ times in the last twenty years) with transgressive, flamboyantly outré Yakuza and horror pictures. But Miike hinted at this exact marriage of a specific Spaghetti Western tradition and the Samurai flicks that were its inspiration with his arch Sukiyaki Western Django--choosing this time around to present the material "straighter," allowing his cast the language and trappings of late-Feudal Japan. The result is possibly the best Samurai movie since Yoji Yamada's Twilight Samurai (and its unofficial sequel, Hidden Blade), a picture meticulous in its details that is nonetheless only possible to fully appreciate within a working conversation with the traditions (including those of Miike's own work) that inform it. It's like a Coen Brothers film in that respect: very much the post-modern artifact, very much the solipsistic auto-critical exercise in genre, but also so technically brilliant and thematically rich that it's possible to enjoy it without much of that prior knowledge.

The plot verges on boilerplate Samurai/Ronin melodrama as retired Samurai Shinzaemon (Koji Yakusho) is hired by a group of concerned politicians to assassinate evil half-brother to the Shogun Lord Naritsugu (Goro Inagaki), lest something happen to the Shogun and his psychopathic favourite become the liege of the land. The first hour moves calmly, menacingly, through a catalogue of Naritsugu's atrocities--the best/worst of which the inexorable execution of a family of women and children and the brilliantly-perverse, quintessentially Miike-ian consequences of a woman's sexual enslavement--as Shinzaemon assembles his titular cabal of grudge-holders, Ronin, and apprentices willing to give their lives in the pursuit of an ideal. It's a humanist piece, though its language is that of the Bushido code of unconditional loyalty and maniacal self-sacrifice, drawing in this way another line to Yamada's modern conversations about the nature of duty and how it changes as age complicates one's perspective. It's possible to say that the first half of 13 Assassins is a paper tiger--that it presents a villain so remorseless and ill that there's nothing left to do but root for his slaughter in the film's orgasmic second half. Yet I'd argue that anything less than this run-up would leave the resolution (and its unexpected, astonishing epilogue) as something closer to high camp than what Miike manages, i.e., exactly the kind of deft, extraordinary poignancy and depth one should expect from the director of Audition.

The stage set, the climactic bloodbath--an ambush in an abandoned village--is gloriously, exuberantly choreographed and executed, proving cathartic in more ways than just textual. Indeed, an action sequence that observes space, indicates the placement of participants within that space, and shows the consequences of success and failure with regards to who's actually winning and losing at any moment, is rare enough in modern actioners that watching 13 Assassins brings a tear to the eye. It's Tarantino-esque in that way, reminding a great deal of Death Proof in its reliance on practical effects, its complete respect for craft, and, of course, its technical acuity. The picture's straightforward in the sense that its plot is linear and largely predictable, but its dedication to innovation in its details is awe-inspiring. Miike paints in the margins in florid, extraordinary detail, exploding notions like loyalty and honour from a place that's almost more Victor Hugo than Eiichi Kudo while questioning standards of beauty and decorum from the position of a genuine gadfly. 13 Assassins is powerful stuff. It's deeply uncomfortable for its lawlessness; no matter how familiar its progress appears to be, the means of its getting there are subject to no moral precedent. The film really isn't much like anything else. It's also likely to land on the shortlist of the year's best. Originally published: May 13, 2011.