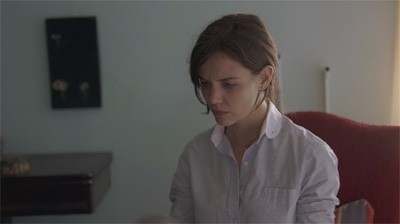 by Walter Chaw Though technically correct, I much prefer the term "Romanticists" to "Romantics," but that's a fussy kind of neither here nor there in a film, hyphenate Galt Neiderhoffer's The Romantics, that suffers from nothing like precision, elegance, or, crucially, poetry. It's a nightmare--a handheld, artfully ugly mash-up of Rachel Getting Married and Dead Poets Society that starts with credits in Wes Anderson's favourite font and slogs on through with Lilith Fair/coffee-shop folk and a character played by Katie Holmes who's jealous of a character played by Anna Paquin's boobs. Let's call it a draw, ladies, and discuss instead this variety of faux-prestige romcom, which hijacks Lloyd Dobler's holding of a boombox blaring Peter Gabriel over his head by having frickin' Josh Duhamel hoist an iPhone with Keats's "To a Nightingale" on its screen. It features idiots like dollar-store Cameron Diaz Malin Akerman and an increasingly Gollum-esque Elijah Wood in awkward supporting roles; allows scenarios like the nightmare rehearsal-dinner toast montage; and tasks Candace Bergen's team of handlers and feeders to drag her out to yet again fulfill the role of Tyrannosaurus Reaction Shot. Good job, Ms. Neiderhoffer, for not only mistaking Catch & Release for Noah Baumbach or Lars Von Trier, for not only setting your indie emoti-fest in the Dan in Real Life bizarre-verse, but for borrowing a bad burlesque from the lame 27 Dresses, too.

Holmes, in need of a more accurate E-meter session to audit her choice of agent, is magazine freelancer Laura, whose non-position is held in such holy esteem by the other characters that it immediately tells you all you need know about the temperature of the room. Laura has been summoned to the Hamptons for the wedding of best frenemy Lila (Paquin), a dizzy, shrill, mostly-absent bridezilla coming in for a landing on chunk of musky driftwood Tom (Duhamel), with whom Laura, of course, has a history and for whom she nurses a flame. Will that flame be rekindled in the madcap moments leading up to the outdoor, seaside nuptials? Yes, dummy. Bolstering this central non-event are various dimwits and nincompoop ciphers who get naked, get drunk, get in the ocean, get into trouble, get into whispered conversations of great import, keep secrets, tell lies, fuck, almost fuck, and eventually come together in the sort of contrivance that whatever audience there might be for a piece of shit like this derides in pieces of shit like Grown Ups. The key romantic moment is the abovementioned smartphone-assisted recitation of Keats, leading to what appears to be uncomfortable sex on the eve of, y'know, another one of those crepuscular movie-weddings complete with non-surprise surprise ending. Poignant? Only because someone worked pretty hard on this.

Framed with no energy and edited with the same enervation, The Romantics takes on the idea of Romanticism as a movement in art and poetry and then leaches it entire of its baseline passion, sublimity, and essential humanism. It's a poor thief, the product of bad thinking and a lack of the basic critical facility required to translate a high concept or theme into visual language. Look to the Coens as perhaps the best at adaptation--to a certain elegance in how they not only bring something to the screen but also pull something essential out of the text in the process. What The Romantics represents is a product that has as its best analogy a silk bow on a pile of horseshit and the ardent hope that no one will notice. The problem is that everyone notices. There's a bit about a torn dress, a mischievous little sister (Dianna Agron), and a summary speech in which someone has to declare all the characters "family" because it's not otherwise obvious in their behaviour. Derivative, bland, overwritten when it's not incomprehensible, The Romantics is never funny, never smart, never engaging, never sexy, and never romantic or romanticist. It's a slog, a disaster, and now it's on DVD, so you can buy it for $4.00 at Walgreen's in a couple of weeks.

THE DVD
If you really are considering a purchase, know that the video quality is not so hot. The 1.78:1, 16x9-enhanced transfer has a good deal of shimmer, washed-out colours, and difficulty resolving shadow detail. Daytime shots look uneven, night shots no better and arguably worse, what with their fluctuating, weirdly noisy grain. It's not the worse thing I've ever seen, I suppose. The DD 5.1 audio is a noticeable step up, leading me to believe that the crappiness of the visual presentation was probably an artistic decision; you get to hear the dialogue with crystal clarity, which is, of course, a double-edged sword. The only extra is a "Behind the Scenes" featurette (11 mins.) in which we discover, among other things, that Akerman was instrumental in the scripting of the rhyming wedding toast she delivers in the movie (I used to know someone who did that for every office meeting--kinda made you want to punch a baby) and that both she and Neiderhoffer were thrilled with the completion of this deadening scene. Holmes, meanwhile, compares the film to St. Elmo's Fire--to be clear, she says it like it's a good thing. Trailers for fellow flops Mean Girls 2, Morning Glory, and Case 39 round out the Paramount DVD, suggesting that the people pushing The Romantics hope, in good faith, that the audience for it is undemanding. Originally published: March 8, 2011.