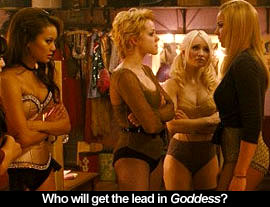 by Walter Chaw Another exercise in incoherent pomo douchebaggery from Zack "I'm Going to Mess Up Superman, Too" Snyder, Sucker Punch is maybe about female empowerment but works more like Tank Girl with a budget: the flexing girl-muscles and punk/fetish/sneering sexuality aren't fooling anyone. It sports a great soundtrack full of cover songs (everybody from The Pixies to The Eurhythmics gets a trip through the revamp machine) and Björk to comment (cleverly, I guess) on how every idea in the film is ripped off from other flicks as varied as Ghost in the Shell, Hellboy, the Lord of the Rings flicks, Kill Bill, Sin City, and--why not?--Fame. Its chief inspiration seems to be Brazil, sharing with that film Gilliam's giant Samurai thing as well as the fantasy parallel-world and framing conceit. It also borrows Gilliam's penchant for overdoing it and making something that's initially arresting into something that's irritating, cluttered, and ultimately hard to watch. By its third or fourth music-video-length set-piece, I was willing to declare Sucker Punch the winner and curl up in the fetal position. This is cinema as endurance test.

But it starts well, with Baby Doll (Emily Browning) burying her sainted mother and accidentally killing her sister, inspiring her dastardly stepfather (Gerard Plunkett) to commit her to the local loony bin, which is presided over by Dr. Gorski (Carla Gugino, doing an accent again) and evil orderly Blue (Ralph Macchio + Scott Baio = Oscar Isaac). To escape her grim reality or something, Baby Doll imagines that she is, instead, the new whore in some bordello. Then, to escape that reality's grim reality, she imagines a series of scenarios in which she's a samurai sword-wielding/two-fisted pistol-packing Manga babe fighting dragons, Uruk-hai, German zombies, and free-flowing misogyny. She enters these fugue states concurrent with listening to music, and though she envisions these amazing things, what others see is her doing really great dancing. Following? Me neither. What the fuck am I talking about? It doesn't matter, because Sucker Punch is exactly the movie a fifteen-year-old me would have made had I the resources and more permissive parents.

The perfect picture for that lonesome, horny teen, see, would be one that had dragons and robots (oh yes, shiny killer robots) fighting hot girls in fuck-me burlesque-wear, all stockings and Merry Widows and smears of hooker lipstick. If this is feminism, more power to 'em--am I right, boys? Sucker Punch wants to have its cheesecake and eat it, too, because it sets up its men as either young and disgusting or old and wise (in the wizened, David Carradine-esque figure of Scott Glenn) and the peril that its young hotties need to battle as clumsy, phallic metaphors for the age-old women's problem of being put in the nuthatch when they're inconvenient. But a twentysomething girl in pigtails and a Catholic schoolgirl outfit is only what it is, even if--or especially if--she's doing the wuxia tango in boy-friendly genres. So it's puerile, sure, and its politics are infantile, but it's also deadening in its endless, chaste bloodshed and interminable-feeling fights that lack flair and coherence. Because we have a pretty fair idea of how everything's going to turn out (and given the film's self-set parameters of each segment lasting the length of a song), there are no real stakes and, therefore, there's no real tension. Once Daniel-san finally freaks out and goes all Ming the Merciless on our kick-ass ladies-in-waiting, it's more about the giggles than the grrrrrrl. Credit Snyder at least for apparently realizing the high-profile mutt he's got on his hands: he tacks on a long, detailed, ridiculous post-script voiceover moral wherein he all but declares that he's sorry, he didn't really know where he was going with this, and, um, hey, rock on.

Sucker Punch isn't so much reality-testing as it is simply wearying. You could argue that Baby Doll nonsensically escapes from life inside a high-security asylum by pretending that she's in a prison/cathouse so that there's a reason for her and her pals to always be wearing Victoria's Secret's dungeon vogue--except that if all this shit is her fantasy, then she doesn't need a reason. It's a film that's simultaneously over-thought and under-thought; where the objective of stealing a kitchen knife is represented in another reality as a timebomb codenamed "Kitchen Knife." Yeah, it's every bit as stupid as Inception, though it doesn't do as good a job of tricking idiots into thinking it's got Freud and Lacan on its mind. It has no rules to respect, nothing on its agenda but to present pretty little girls at play in obsessively detailed HEAVY METAL fantasy-scapes. And while it's hard to hate its absolute mad dedication to its zaftig sensibility, it's very much like a specific refrain from Warren Zevon's "Splendid Isolation": "Lock the gates, Goofy, take my hand/And lead me to the world of self." Sucker Punch is a movie that doesn't need an audience--just a box of tissues and some lotion. That feeling of anxiety you start to get into its second hour is the dawning realization that the movie kind of wants to be by itself. Originally published: March 25, 2011.