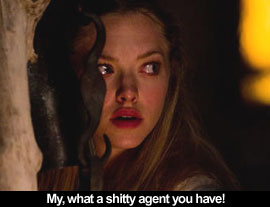 by Walter Chaw That Catherine Hardwicke keeps getting jobs speaks to a deep, ugly dysfunction in the Hollywood dream factory. Not the thought that money talks, but the idea that people like Hardwicke and Adam Sandler and Michael Bay are handed the keys to the executive washroom because they understand what it is that certain critically-deficient demographics want and proceed to provide it in massive, deadly draughts. In other industries, there would be regulatory agencies--though it's fair to consider that checking the poster for Red Riding Hood would give you all the nutritional information you probably need. Namely that Hardwicke is the main ingredient, and that had I remembered this before the screening, I never, ever would have gone, in exactly the same way I wouldn't eat scrapple again. I'm sure a lot of people like that shit, but grey pig-mush is grey pig-mush. Red Riding Hood is easily the worst movie I've seen since probably all the way back to A Sound of Thunder, and in a lot of the same ways: horribly written; horribly performed (but they didn't have a chance); directed by someone that cameras should file a restraining order against; and edited by a cast-iron moron (make that pair of morons: long-time Hardwicke accomplice Nancy Richardson and poor Julia Wong). At least there's Gary Oldman along for the ride to order his Moorish henchmen to, at one point, "put him in the elephant!"

The star of the show is lovely Valerie (Amanda Seyfried), who, inconsequential to her donning of the titular muumuu, is betrothed to doltish Henry (Max Irons), although her heart really belongs to doltish Peter (Shiloh Fernandez). Valerie's Grandmother (Julie Christie, a long way from McCabe and Mrs. Miller in this wilderness--shit, a long way from Dragonheart) lives in a quaint house in the woods, her father Cesaire (Billy Burke, sort of a darker, somehow duller Richard Dean Anderson) is the town drunk, and her mother Suzette (Virginia Madsen) is never getting her career back. But lo, to bring a whiff of excitement into their lives, a werewolf is terrorizing their little hamlet, leading to the arrival of werewolf-hunter extraordinaire Father Solomon (Oldman), who has, among his ornaments and trinkets (like a silver sword and a mute Chinese guy played by ace stuntman Paul Wu), a giant bronze oven forged in the shape of an elephant. It was made by the Romans. Turns out Valerie has a mysterious connection with the monster and that the residents of her hamlet like to set fires in the middle of haylofts for warmth. Dumber still, once it's revealed that the monster is one of them, nobody insists on just sort of doing a headcount immediately after the wolf disappears.

Never you mind, as who could reason with so much lust in the air? Henry, suspecting poor, remarkably well-preserved Grandmother, goes so far as to accuse her of exuding "demon musk"--a stink, it's later revealed, that she's "lived with her whole life." Yes, Red Riding Hood is side-splittingly atrocious, hilarious in the original sense of the word in that it's hard to tell if those tears are of mirth after a while. Even small, throwaway moments, like the suggestion in the epilogue that Henry has turned into a "noble" witch-hunter, carries with it the nincompoop-sting that Father Solomon's surviving Negro manservant and yellow-man are now gamely following another white guy because that's just what they fucking do. Oldman, for his part, chews scenery, particularly in a nasty scene where a homely village wench offers her body in exchange for the life of her retarded brother (in the elephant, natch), which Hardwicke in her wisdom pays off by never revealing whether the halfwit in question is alive or medium-well. All would have been forgiven if, as in Joe Johnston's also unintentionally funny but infinitely wittier The Wolfman, the film had made the logical decision to allow Valerie to become a wolf and engage the other wolf in a wolf-fight--or if, during the closing credits, it were revealed that Valerie was having carnal relations with a giant dog. Alas, Hardwicke is neither feminist enough nor misogynist enough to deliver anything of provocative value.

The fallout, obviously, of the cult of Twilight, Red Riding Hood is so poorly filmed that everything in it--everything--is funny, from a grieving mother pausing (and grimacing, in boss "Invader Zim" style) in the doorway of a pub to an obviously pagan celebratory dance sequence that doesn't quite jibe with the film's late-Christian histrionics. The dance sequence is key to understanding what probably happened in the film, as it's so deeply stupid and self-contradicting that you can only think the screenwriter (David Leslie Johnson (Orphan)) had it one way and Hardwicke thought it would be cooler-looking all, y'know, heathen-y and shit with masks and a laurel crown on a wolf's head and stuff. Pity not Oldman, who aspires to Anthony Hopkins's heavy crown of cashing paychecks, but rather Christie, who really doesn't deserve to be the butt of so many weird stings and not-even-vaguely startling jump scares. When she sits up in bed, smiles, and says, "Good morning sweetie," after Valerie Thinks She Hears a Noise, anyone with any history of Christie and her career has a right to wonder how she's found herself here in latter-day Joan Crawford/Bette Davis territory. Blame it on the demon musk. Originally published: March 11, 2011.