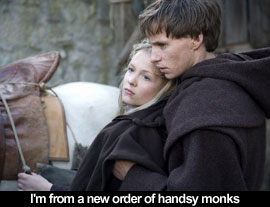 by Walter Chaw Christopher Smith follows up his listless slasher-farce Severance with the handsome-looking Black Plague/witch-hunting flick Black Death--a well-played, well-conceived piece that's ultimately distinguished by a few sticky after-images, even as it doesn't quite get to where you hope it's going. Set in a pleasingly grimy, disgusting Dark Ages, the picture finds our hero, monk Osmund (Eddie Redmayne), besotted with comely Averill (Kimberly Nixon) and beset on all sides by the inexorable tide of the bubonic plague. Enlisted by Bishop-appointed Holy Roller Ulric (Sean Bean) for his familiarity with the countryside to locate a strange, untouched-by-plague village, Osmond becomes, er, plagued by crises of faith. The problem, besides his wanting to nail Averill in a most unholy way, is that the village in question appears to be untouched by disease because it doesn't believe in God.

Built on the fascinating premise that God is actually kind of an asshole (see: the Book of Job and, um, the rest of the Bible), Black Death ultimately seems to side with the angels, meaning that for as painful as this path to faith is, it's the way to, if not salvation, then victory. The film occupies a similar space as Valhalla Rising in that sense, except that it's less interested in mythology than in a popular, even facile, cynicism of the sort that tends to undermine any compelling blasphemy. When Osmund, Ulric, and their band of mercenaries arrive at the village, they find it pristine as advertised and headed up by pretty witch Langiva (Carice van Houten, sort of a Dutch Patricia Clarkson). Well, this must not stand, of course, the idea that pagans and other heathens should escape God's wrath, and so our merry men proceed to spread death under the banner of Heaven.

It's further complicated by an interesting, Val Lewton-esque reanimation intrigue (coupled with a hallucinogenic walk through tall grass that directly references I Walked with a Zombie) that tests Osmund's loins against his beliefs, as well as by our protagonists' capture by pagans who, The Wicker Man-like, turn out to be not as harmless in their free-lovin' ways as initially appeared. Though Bean is die-cast as the soulful man-of-action at this point, Redmayne proves a real revelation in a role tailor-made for Jamie Bell. He's understated and convicted, and I would've frankly preferred that the film begin with the discovery of the village and continue, in detail, with Osmund's career in the aftermath. It's squeamish is the problem, avoiding the physical consequences of murder and torture in a way that ameliorates the impact of the spiritual agonies endured by the characters. Each time Smith turns the camera away at the moment of bloodletting, it serves to glamorize the violence--enough so that a raid by a group of bandits plays like syndicated television and a disembowelment late in the game is ennobled rather than condemned. It's the climax of Braveheart instead of Oden's escape in Valhalla Rising. Black Death's too slick to tell the story it wants to tell--too polite, perhaps, seeking too wide an audience for a story that only works if it offends. Mel Gibson's got it all figured out. He's also, strange as it is to say, raised the bar for this kind of thing. Originally published: March 16, 2011.