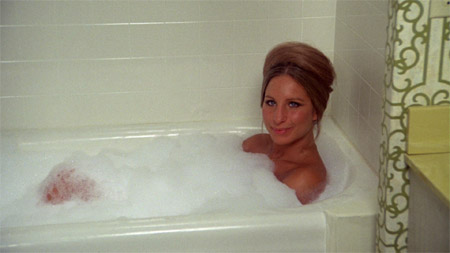 by Bryant Frazer Barely more than 45 minutes in, What's Up, Doc?, a romantic farce directed by Peter Bogdanovich and starring Ryan O'Neal and Barbra Streisand, reaches a madcap climax set in a San Francisco hotel room--it features an especially hapless O'Neal, an increasingly angry Madeline Kahn, an exploding television set, an insistently ringing telephone, and la Streisand, wrapped in an oversized bath towel, dangling from the window ledge outside--that makes you wonder whatever the hell else the film could have up its sleeve. It's not simply that the scene is an appropriately hilarious culmination of plot threads involving mistaken identity, musicology, and pre-marital strife, but also that it demonstrates an astonishing commitment on the part of the filmmakers to physical comedy on a grand scale. It's this sequence that transforms What's Up, Doc? from a tastefully sophisticated contemporary take on the screwball comedy into a thing of real mayhem. Arriving, as it does, just halfway into the film, it's a promise of even more flamboyantly orchestrated chaos to come.

Bogdanovich and crew don't disappoint, diverting the action first to a posh luncheon that's hijacked by a criminal gang and utterly demolished by fistfights and gunfire, then to the streets of San Francisco themselves, where an elaborate, expensively mounted chase sequence splits the difference between Sherlock Jr. and Bullitt. (On a commentary track, Bogdanovich notes that at least one of the locations used bears the scars inflicted by the picture's stuntwork to this day.) The action abruptly screeches to a halt for the film's odd, and abbreviated, third act, but the results are still something to savour--an explosive, inventive counterpoint to the fast-paced, insistently witty dialogue (from screenwriters David Newman and Robert Benton, with an apparently extensive final polish by Buck Henry) that drives the central love story in the first act.

Conceptually, this is the sort of movie you expect to see when a film critic turns director. (Bogdanovich was trained as an actor, but he first made his name in the industry writing for Esquire magazine in the 1960s.) The central conceit is almost too precious, too self-consciously film-smart, to be palatable. Basically, this is a loose homage to Hollywood screwball comedies in general--and Bringing Up Baby in particular, with O'Neal playing the Cary Grant role. As Howard Bannister, he arrives at a musicologists' convention with fiancée Eunice Burns (a very funny Kahn, making her film debut) in tow. He's determined to win a prestigious award to finance his pet research project involving the tonal qualities of certain rocks. (Just as Dr. Huxley in Bringing Up Baby was preoccupied with his missing bone, har har, Bannister spends much of What's Up, Doc? searching for his rocks.) His attention is diverted, over and over again, by the insistent presence of wisecracking Judy Maxwell (Streisand), who seems immediately set on prying him away from his betrothed. Slapstick antics ensue.

I'm no Streisand fan, but she's really something in What's Up, Doc?, cast as a street-smart, book-savvy gamine who comes on in the manner of Bugs Bunny in drag. (You'd think that would be a stretch, but Streisand channels a cartoon character with aplomb, and Bogdanovich even makes the connection explicit by having her munch a stolen carrot as she delivers the movie's titular greeting.) Has anyone ever reined this woman in, yoking her outsized personality as successfully to an actual performance, as well as Bogdanovich does here? O'Neal is appealing enough to make the bland straight-man act work, mostly. Though he lacks the self-possession of his obvious forebears (the bespectacled Harold Lloyd was another model), he looks pretty good in awkward situations, even while keeping an absolutely vacant expression on his face. The scene where he attempts to undress after a stressful social encounter, successfully whipping off all his clothes but for a pair of boxer shorts and a bow tie, is pretty much a classic. (Did this nerdy nearly-nude get-up influence the Chippendales?)

Happily, O'Neal and Streisand work well together. You'd never mistake the characters they play for actual human beings, but that's beside the point. Mostly, these two are gag delivery mechanisms. Bogdanovich does give them a moment of consummation, however, pausing the story long enough for a midday rendezvous on an under-construction floor of the hotel, high above the city, that is for some reason adorned with a piano. Howard sits and plays "As Time Goes By" (one of many musical properties controlled by Warner Bros. that can be heard in the film) while Judy vamps it up, splayed across the piano and gazing into his eyes. Seduction complete.

He heads back downstairs to see Eunice, but by this time his separation from her is a foregone conclusion. If we cared too much about these people--if the picture aspired to any kind of seriousness at all, let alone the treacly affirmations of friendship and family that are so in vogue in contemporary Hollywood comedies--the disintegration of their relationship might be a bit upsetting. (Watching the film is a little bittersweet, anyway, since it presents a snapshot of a young director working at the top of his game a mere couple of years before the bottom fell out.) As it is, What's Up, Doc? is a rare cinematic lark: devilishly written, expertly directed, seasoned with a dash of nostalgia, and executed with immensely satisfying, meat-and-potatoes showmanship.

THE BLU-RAY DISC
It's no wonder What's Up, Doc? was a huge hit in 1972 (its grosses for the year behind only those of The Godfather and The Poseidon Adventure), and though Bogdanovich still comes off as a scholar, he seems to have a good enough time revisiting it in his full-length yak-track. He describes the movie's genesis--in an anecdote about receiving an offer to do a serious picture with Streisand, and how he responded by quickly crafting a comic vehicle instead--before launching into a scene-by-scene discussion that includes his elucidation of the production's various locations, recollections of working with the cast and crew, some discussion of the mechanics of comedy, and explanations of inside jokes.

But the accompanying "scene-specific audio commentary" by Barbra Streisand is, unless you're the kind of super-fan who gets a kick out of simply hearing the woman's voice, the most useless of special features. "It was a funny movie to make, except I never knew what was going on," she admits. "I couldn't follow the story myself." Her bland declarations here hardly square with statements she made at the time of the film's release, when she told Newsday, "I hated it with a passion.... I thought it was infantile humour." Anyway, promoting this extra as a "commentary" borders on false advertising. Streisand manages to string words together for barely 12 minutes (and that's with lots of dead air) as she watches the film, and the accompanying scenes are assembled in standard-definition only, which is, frankly, pretty lazy for a major-studio title. Then again, if cutting corners like this helps Warner Home Video hold the line on Blu-ray pricing, I might be all in favour of it.

The transfer of What's Up, Doc? proper is fine. It's not the type of movie that leaps off the screen, but the VC-1 encoded image, presented (incorrectly, but only mildly so) in HDTV-native 1.77:1 rather than at any actual theatrical aspect ratio, is full of detail and contrast, with an appropriate layer of grain visible throughout. The rich reds, say, of the lobby of the San Francisco Hilton, hold together on screen and suggest a real depth that can go missing from a careless transfer, and a lot of picture information is visible in the shadows. Although limited to a single channel, the film's monophonic mix gets a nice, full-on DTS-HD MA encoding. It sounds very good, with no real flaws, even if it's occasionally thin and treble-y--certainly in line with what you'd expect from a studio release of the period.

The disc also contains a vintage 1.33:1 featurette, replete with cheesy-cheery voiceover, called "Screwball Comedies: Remember Them?" (9 mins., SD). It's well worth watching as a treasure-trove of behind-the-scenes footage, including a young and pleasantly goofy-acting Bogdanovich playing to the camera. If you're curious, for instance, what exactly the set-up looked like for the famous shot where O'Neal, Streisand, and the other dinner guests are conversing with their heads under the table, you'll see it here. Finally, there's an entertaining trailer (4 mins., SD) that features some of the same documentary footage, cropped to 1.77:1 but looking simultaneously grainier and more filmlike in this incarnation.