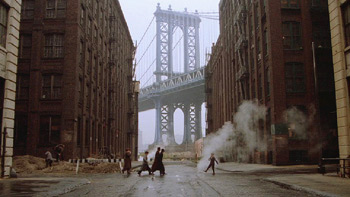 by Bill Chambers Such is the level of cinematic sophistication in Sergio Leone's Once Upon a Time in America that all of the miserable things that happen in the picture make you giddy, filling you with the joy that is basking in an artist's command of a medium. At first, the powers-that-be didn't get it: Warner Bros. took Leone's non-linear vision and straightened it out, and the result was a picture that, though chronologically told, made no sense. This was a fascinating lesson in syntax--films are composed of "meanwhile"s, not "and then"s, perhaps none more so than Once Upon a Time in America, which is about the co-existence of past, present, and future tenses. (It's like an extrapolation of the riddle of the Sphinx: what walks on four legs in the morning, two legs in the afternoon, and three legs in the evening?) Luckily, the studio saw the error of its ways and reissued Once Upon a Time in America a year after its butchered American release in its longer, knottier international form, and to illustrate the dramatic disparity between the 139-minute domestic and 227-minute global versions, critic Sheila Benson labelled the former the worst movie of 1984 and the latter the best movie of the 1980s. Pauline Kael wrote, "I don't believe I've ever seen a worse case of mutilation."

The "Special Edition" from Warner, which I'm reviewing here, runs 229 minutes; odds and ends were restored for this exclusive-to-DVD presentation, ostensibly to satisfy Leone's original intent. There are two additional incarnations of Once Upon a Time in America, one belonging to Leone's homeland of Italy that runs 238 minutes, the other hypothetical, that to the best of my knowledge does not exist in any watchable form: a ten-hour trilogy cut that devotes a single film to each period covered--that is, 1921, 1933, and 1968. That brainchild might explain why the widescreen-fond Leone framed Once Upon a Time in America for projection at 1.85:1, an aspect ratio that cooperates better with TV, for it suggests a model for a mini-series. As it stands, the film is inconceivable as a triptych, so fastened is its current construction, so graceful are its pirouettes through timelines.

Consider the opening passage, rumoured to have inspired the phone conceit of The Matrix: Thirtyish Robert De Niro is lying in an opium den when a telephone rings--and never stops ringing for the duration of the succeeding montage of images (including a striking one of a coffin-shaped cake that reads "Prohibition" in icing) arranged backwards to show aftermath leading to violence. Stirred from his narcosis by a sixth-sense intuition (finally putting an end to the incessant bell), De Niro escapes an ambush of mobsters and hotfoots it to a train station, where he steps through a thoroughfare and comes back out an old man. Allowing for terse dialogue exchanges, this half-hour of the film might be the best silent short ever produced, and, like a true hypnosis, the seduction of it imparts an astonishing amount of detail that will become touchstones later on. It's almost not even crucial that you pay attention, since the film is an agent of storytelling: You don't watch it so much as let it into your bloodstream.

Once Upon a Time in America answers questions you never thought to ask, such as, What did bootleggers do with their lives after liquor became legal again? Sunning on a beach, racketeer Noodles (De Niro) hurls a newspaper with the headline "Prohibition Ends" at his partner Max (James Woods) and says, "Looks like we're going out of business." Most gangster movies end before this scene; Leone demonstrates how lifting the ban on booze effectively gave birth to the bank robbers of the Thirties, with folks in Max's line of work poisoned--many of them irrevocably--by the aroma of dirty money. In this regard, the film is as much an anthropological as a historical saga, but Leone's social acumen is an acknowledged double-edged sword, pushing the picture at times past good taste and into the realm of exploitation. Imprisoned as a lad, Noodles is paroled in adulthood; those seminal years during which we learn to negotiate with the opposite sex taken from him, Noodles's arrested sexuality proves a combustible duo with the lawlessness of the jazz age, and he rapes the first woman on the outside to refuse him sex. There's a masturbatory appeal to Leone (let's face it, his movies can be protracted for length's sake) that can be upset if he wallows in his trademark eruptions of violence, because they begin to resemble a disdain for actors. The entire time Noodles is violating Deborah (Elizabeth McGovern), you're squeamish for McGovern, not Deborah.

It's safe but misleading to call Once Upon a Time in America misogynistic for its ornamental, disposable treatment of women. Leone kicks off the picture with the assassination of a sweet-looking blonde, and when she's introduced by name (Eve) in the second half of the narrative, it's just as the girl glued to De Niro's arm--her death holds very little significance, there's almost no tragic resonance about it, while both fat ladies in the film are there for the inevitable carny-era visual of skinny guys plunging foamy mouths into their saucy-mama cleavage. Yet there is some incontrovertible fidelity in the film's machismo to the pre-feminism America it portrays, and it's intriguing, to say the least, that the 1968 sequences consist of several pathetic geezers and one still-luminous Deborah: She seems to have been blessed with the gift of immortality in reimbursement for the evil that men do. It's the moment when Leone sucks up to actresses by pretending they don't age, but it has curious potency given the Sixties subtext of women's lib.

Once Upon a Time in America is a masterpiece of effects. Any loss of innocence left unconveyed by De Niro, our emotional courier, is filled in by Ennio Morricone's piano/oboe/pan flute dirge, music to remember to. (It's evident that Leone played Morricone's score on set in the daydreamy faces of his cast; in so doing, the director transformed many a novice thespian, including a prepubescent Jennifer Connelly, into someone more likely to register with the camera and less likely to be self-conscious performing for it.) An elegy, it was the perfect swan song for Leone, who applied every residual visionary idea he had to his twelfth (eighth credited) and final film; Once Upon a Time in America is ultimately most remarkable for how sporadically Leone resorts to self-imitation--typically the mark of a prolific filmmaker's late-career work--therein. But while TIME's Richard Schickel rightly observes the picture's fantastical qualities in his DVD commentary, his perpetuation of the interpretation of Once Upon a Time in America-as-opium dream is debunked once and for all by the presence of television in the '68 flash-forwards.

THE DVD
Warner's Two-Disc Special Edition of Once Upon a Time in America is slimly supplemented compared to their other double-DVD SEs, but it's a privilege to own a good copy of the film itself. The 1.78:1 anamorphic widescreen transfer is uneven erring on the side of excellent; mosquito noise and what I can only describe as an '80s patina compromise a few shots but not the viewing experience as a whole. Colours are dynamic and the compression is invisible, although the platter-break is atrocious: we're commanded to switch discs before the intermission proper, at the peak of an exciting pursuit inside a factory. Remixed in Dolby Digital 5.1, Once Upon a Time in America sounds monaural except where it counts: Morricone's compositions bear striking authority and clarity. A vocal ringer for "The Simpsons"' Principal Skinner, Schickel delivers an extended plot synopsis/analysis with no particular conviction in his frequently dead yakker; on the second disc, find the 20-minute Once Upon a Time in America excerpt from the BBC documentary "Once Upon a Time: Sergio Leone" (nothing groundbreaking), as well as a gallery of production stills ("Photographic Memories") that lasts 13 minutes if you don't shuttle through it. Cast and crew bios round out the package. Originally published: June 12, 2003.

by Bill Chambers So engrossing is Once Upon a Time in America that I watched its Blu-ray debut in its entirety without remembering to take a single note on the transfer. Regardless, I believe this 1.78:1, 1080p presentation to be sourced from the same lovely master as the DVD. It looks more 'fine-tuned' in HiDef--when I went to cap the DVD for the FFC Blog a while back, I was surprised by the amount of chalky noise in the image--but the format upgrade doesn't fix the steep drop-off in black level, and indeed seems to somehow exacerbate it. (Maybe if they'd spread it out over two discs instead of packing the four-hour film onto one platter, there wouldn't be so much crush?) Detail is satisfyingly glassy beneath a fairly tight grain structure, however, while the colours have greater range and a newfound naturalism without violating the picture's sepia-tinted ethos. The 5.1 DTS-HD MA track adds depth to a great Ennio Morricone score (which responds very well to amplification), though the mix, for better or worse, sounds stranded in 1984, with little but the score enveloping the viewer and the subwoofer virtually neglected during even the heaviest moments of gunfire. Still, getting to hear that music in lossless audio is a privilege I refuse to underrate. Richard Schickel's insufferable commentary and the tantalizing excerpt from "Once Upon a Time: Sergio Leone" have been ported over in full from Warner's Two-Disc SE (the latter in 16x9-enhanced standard definition), but the photo gallery and cast/crew bios were dropped in favour of the film's theatrical trailer. Originally published: February 4, 2011.

"It's safe but misleading to call Once Upon a Time in America misogynistic for its ornamental, disposable treatment of women."

Men get beat up and killed plenty worse in Leone's universe. He just didn't spare the women the cruelties and betrayals of his world. If feminists want equality, Leone gave women what men got in his movies.

Leone was a fatty but fatties end up especially bad in his movies.

Maybe he was a pigonygist.