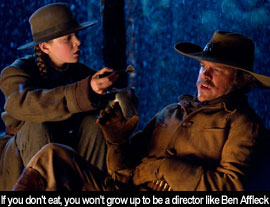 by Walter Chaw In exactly the same way they distilled the essence of Cormac McCarthy into an overwhelming, oppressive, animal nihilism in No Country for Old Men, Joel and Ethan Coen have distilled the folksy Americana of Charles Portis into their adaptation of his True Grit. That gift for translation is what made The Odyssey into their collection of regional songs and stories O Brother, Where Art Thou?, what made their Miller's Crossing and Barton Fink (the two films, along with O Brother, that True Grit most resembles) so sure in their genre approximations. More than mimics, the Coens' genius is as interpreters and scholars, able to understand the thrust of not Preston Sturges, but of a Preston Sturges character--of not one book but, miraculously, a body of work. And though True Grit is as literal and faithful an adaptation of the novel as one could hope for, the brilliance of it is that it's captured the immersive feeling of Portis's prose. More than an adaptation, True Grit is an explanation of Portis's work through the agency of an entirely different medium. It suggests that the Coens are like Tarantino's monologue explaining Superman at the end of Kill Bill, Vol. 2: there is in their Fargos and Raising Arizonas sardonic commentary on genre and spectatorship. The big secret is that they are in their way as detached and alien as cultural critics as Cronenberg is as an anthropologist.

All of which means that underneath the plainness of True Grit are currents of satire and the wryest sense of extratextual irony--its major departures from the source material (speaking of the novel, not of the novel John Wayne film) are almost exclusively in the reductions of its male icons in favour of the plucky little girl. The subtle implication in the book is that it's young Mattie Ross (Hailee Steinfeld) who is the possessor of the titular grit, which the Coens have promoted to the central, motivating device of their film. Mattie has come to town to settle the affairs of her recently murdered father, enlisting the aid of drunken marshal Reuben "Rooster" Cogburn (Jeff Bridges) in the pursuit of dimwit Tom Chaney (Josh Brolin), who's currently in the employ of nefarious "Lucky" Ned Pepper (Barry Pepper, no relation). Texas Ranger LeBeouf (Matt Damon), also on the trail of Chaney for the murder of a Texas senator and his dog, joins Mattie and Rooster as they travel through Arkansas looking for their man. Along the way, issues of religiosity, the male ego, the lingering rifts left by the Civil War, gun culture, and the cost and reward of vengeance hover there on the periphery of a passel of great supporting performances bolstering an absolutely dead-on turn by newcomer Steinfeld equal parts prim and game. The whole of it, though, is held to the point of absurdity for an extra beat--I'm thinking of LaBeouf's open-mouthed gape (enhanced by a film-manufactured mouth injury after a wonderfully-botched ambush), of Rooster's dispassionate treatment of two wayward boys, even of the final, signature showdown involving teeth-held reins and two-fisted gunslinging--so that the picture has about it an almost sarcastic air.

And yet True Grit represents the first deeply-felt Coen Brothers film since maybe the monologue that ends Fargo, finding in Bridges a leading man capable of conveying warmth through the chill of the Coens' misanthropy (and in Portis, an author capable of the same). In a lovely sequence beneath a winter night sky as Rooster rides Mattie back to town, the Coens manage sentimentality without resorting to sap in finally positioning Rooster as a replacement father figure. They're so averse to sap, in fact, that this sequence ends with horse euthanasia and permanent disfigurement, tying into a framing voiceover that acts as melody to paired images of twinned caskets, both holding dads, shipped back for burial in the family preserve. An essentially modern western, it addresses race in the Coens' acerbic/hilarious way (the naming of a pony is transferred brilliantly to a dialogue between Mattie and a small black stableboy (Orlando Storm Smart); a condemned Indian (Jonathan Joss) is denied his last words), while its portrayal of masculinity is reduced to a competition of cornbread marksmanship. It's a smart dissection of the western and the American conception of heroism and justice, of this popular adherence to the Old Testament to try to punish all the hatred and mendacity of the world, no matter that the avatar of justice is a whiskey-pickled, one-eyed serial killer. No matter that the film's villain is so addled and stupid that his eventual comeuppance rings like an afterthought. It plays to deeps but, like most of the Coens' films, it plays brilliantly on the surface as well. Executed with intelligence and verve, True Grit is more proof if proof were needed that American film is alive and well into the new millennium. Originally published: December 22, 2010.