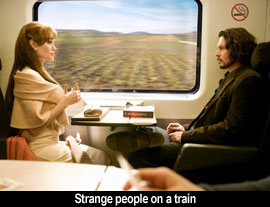 by Ian Pugh The loss of Bond 23 to MGM's umpteenth bankruptcy drama was just one of the many disappointments in the cinematic year that was--but an even bitterer pill arrived in the films that took 007's place. With neither Daniel Craig nor Matt Damon to keep a perpetually-ailing genre on its feet, 2010's triumvirate of identical spy thrillers (Knight and Day, Salt, now The Tourist) represents a return to the cozy arms of irrelevance. Sexpot secret agent Elise Ward ("Salt" herself, Angelina Jolie) leads her superiors on a wild goose chase through Venice in search of American math teacher Frank Tupelo (Johnny Depp), whom they believe to be her mysterious fugitive beau, Alexander Pearce. Unfortunately, this little game also garners the attention of a gangster (Steven Berkoff) to whom Pearce is rather severely indebted. The Tourist is not a daring picture by any means. The most unconventional thing about it, other than the casting of Depp, is the oddity of hiring Timothy Dalton to play a version of "M" when this is so clearly a Roger Moore movie: a romantic trip across Italy in a white tuxedo, peppered with stunts that border on slapstick.

Nearly everything I wrote about Salt and Knight and Day applies here, right down to understanding Jolie's identity as less an actor than a movie star. (The narrative seems to self-consciously objectify her in turn, demanding that her character be valued more for her talents as a heartbreaker than for her talents in the field.) The saving grace of The Tourist is Depp, who is thankfully more actor than movie star. Playing it relatively straight, his seamless drift from "hapless schmuck" to "wannabe hero" gives him a legitimate Everyman quality that often eludes his fellow superstars. He distinguishes himself in a picture that manages to make Venice look like every other action-movie backdrop under the sun. Indeed, the film's as uninspired as its title; once the basic components are established (spies, killers, and civilians embroiled in mistaken identities), it doesn't take long for us to work out the path to the inevitable twist ending.

At least The Tourist doesn't actively deny the inevitability of its plot or character arcs. Depp's Frank is your typical wayward nebbish, but the film gives him qualities and accessories that indicate he'll end up trying to play the badass. (He smokes electronic cigarettes and can climb across Venetian rooftops without too much difficulty.) Furthermore, the picture boasts a climax that hinges on when--as opposed to if--the good guys will put the kibosh on the villains. The only problem is what stands between those two goalposts--which is to say, the lethargic chases, the nonexistent chemistry between the two leads (movie stars vs. actors again), or anything resembling suspense. The more you ponder The Tourist, the quicker it disappears from memory. It's diverting, but perfunctory. It's 2010 in a nutshell. Originally published: December 10, 2010.