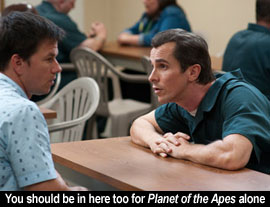 by Walter Chaw In this episode of Mark Wahlberg Talks to Animals, former Funky-Bunch yogi and butt-model Wahlberg gets in the ring, but his real challenge comes in the upstaging Method skull-sharpening of Christian Bale and all the white-trash broads of Style Channel's Bostonburba-licious. Oscar-baiting is the least of the picture's myriad crimes, though--tune in to director David O. Russell's absolutely gassed The Fighter for a training montage, an inexplicable '80s soundtrack (pop quiz: Last time Whitesnake used in a film without irony? It's a trick question), and a Rocky trajectory to the Big Fight, this time with Hollywood ending intact. Through it all, centring it like a brick on a shit-blanket, is Wahlberg, his dim-bulb "Say hi to your mother for me, all right?" persona the immovable object stalemating the plot's unstoppable force. The only thing really surprising about The Fighter is that Ron Howard didn't direct it.

Wahlberg's Mickey Ward has a brother, Dicky (Bale), who used to be a boxer but is currently a crack addict and the subject of an HBO doc about his bottoming out, and a barmaid girlfriend, Charlene (Amy Adams), who wants to separate Mickey from his no-class family chorus of screeching harridans, led by hairspray materfamilias Alice (Melissa Leo). That Mickey's family is a collection of ill-defined Dickensian caricatures is probably fair--I mean, I frankly thought Bale's performance ridiculous until a closing credits-glimpse of the real Dicky doing a mean Christian Bale-as-Dicky--but it doesn't lessen the degree to which the whole thing is one long plod through underdog convention to its foregone conclusion. Give this to Marky Mark: although he never for a moment convinces that he's a boxer (just as Russell never for a moment convinces that he's Martin Scorsese (or even John G. Avildsen)), he's at least relentless in his desire to complete the rags-to-rags trilogy he began with Rock Star and Invincible. Small wonder that Wahlberg keeps coming back to uplift melodrama after continually being proved unequal to the task of not appearing doll-eyed and vacuous by his sojourns into other operatic man-genres; it's the only kind of movie where you actually want to root for the poor, simple son-of-a-bitch.

Leo is fine for what she seems content to be doing, Adams is fairly amazing in her ability to be as stupid-seeming as whatever leading man she's paired with, and Bale is...I'm over Bale. The direction is pedestrian and unexciting, while the screenplay is flaccid and so predictable that you could set a watch to the opportunities for metronomic grandstanding offered each of its Oscar contenders in turn. The purpose of The Fighter is so clear it should be offensive to anyone who gives a crap about film as a means of artistic expression rather than as a way to manipulate shallow responses in the pursuit of industry prestige and the attention of alleged cinephiles who only go to movies during awards season--and then only under the guidance of the middle-aged Finnish Penny Saver "journalists" comprising the nominating body of the Golden Globes. It's the perfect middlebrow dimwit movie for this time of year: a movie of no emotional complexity that plays for most of its time like an episode of "Springer". Enduring it is bearing witness to Mickey beating up a guy in a bar for ogling Daisy Duke'd Charlene at a whiskey bar; Mickey getting the shit beat out of him before pulling out a pair of identical matches shot identically in the late rounds; Charlene standing up to Mickey's gaggle of sister-geese and breaking one of their noses (not that it ever comes up again); Dicky getting off the pipe; and Mickey making good when the chips are down. With characters this broadly sketched and situations this over-inflated, with no discernible point and no depth to it beyond "will this idiot meatbag ever get a fancy belt so we can freeze and fade to black," well, hell, is it any wonder that The Fighter's bound for Oscar glory? Originally published: December 17, 2010.