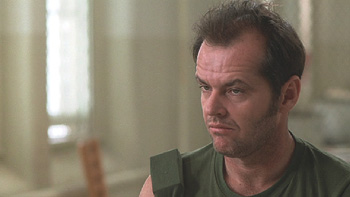 by Bill Chambers Philosophically sound, motivational, inspirational, Czech director Milos Forman's One Flew Over the Cuckoo's Nest is one of a small number of Best Picture winners to actually deserve the statuette. Arriving at the crest of a European-influenced period of filmmaking, before "brats" Spielberg and Lucas hijacked Hollywood once and for good, One Flew Over the Cuckoo's Nest is not popularly considered a seminal movie of its cinematically lauded decade, though it did change the tenor of Jack Nicholson's career (he'd always played loose cannons, but of a squarer breed) and became the first film since 1934's It Happened One Night to sweep the five major Oscar categories: Picture, Actor, Actress, Director, and Screenplay.

The film, adapted from Ken Kesey's novel but arguably demonstrating greater fidelity to the stage play that sprung from it, stars Nicholson as Randall "R.P." McMurphy, a convicted statutory rapist transferred from a work farm to a mental hospital when he displays signs of extreme apathy. He thinks he's landed on easy street: He'll serve the remainder of his sentence without having to be rehabilitated through prison chores. What he doesn't know is that getting committed means he's in "the cuckoo's nest" until deemed sane by an advisory board. McMurphy shouldn't, therefore, rile Nurse Ratched (Louise Fletcher), the ward's maternal figure, a woman who operates on a punishment-reward system and does whatever else she can to retard the independence of her patients. She's the personification of institutionalization.

The film's pivotal moment comes just after inmates too cowardly to raise a hand in front of Nurse Ratched shoot down McMurphy's proposal to watch the World Series. (A Native American patient (the magnificent Will Sampson) tall enough to reach the basketball nets on the hospital's court later sums up the incident for McMurphy with ironic humility: "You're a lot bigger than I am.") Sullen, he tells them he's going to pick up a giant, marble water-fountain and hurl it through one of the gated windows, leap to the ground, and head for the hills--any old dive showing the game is his destination. Bets are placed against him that he's capable of hoisting such a hefty object, and McMurphy fails accordingly.

As he's leaving, though, he makes what sounds like a victory speech: "But I tried, didn't I goddamnit? At least I did that." This is a film preaching not success, but endeavour, hence a viciously bittersweet conclusion that happens to drive this viewer to uncontrollable tears each and every time he sees it. Unapologetically manipulative (if not correspondingly sentimental), One Flew Over the Cuckoo's Nest was often shot with two cameras simultaneously in order to capture the spontaneous reactions of its gifted cast, including then-unknowns Danny De Vito, Christopher Lloyd, and Sydney Lassick (as the heartbreakingly immature Cheswick); the picture maintains a loose quality without, somewhat miraculously, the attendant technical sloppiness of Robert Altman's similarly impulsive methods. Populist in the best sense of the term, it's perhaps the decade's quintessential transitional film, exhibiting the virtues of the unconvention which preceded it and the Oscar-bait which undoubtedly exists in its wake.

THE DVD
Released on LaserDisc a few years back in a coffee-table collectible from Pioneer Special Editions, One Flew Over the Cuckoo's Nest is now available in a "Two-Disc Special Edition" DVD from Warner Home Video that represents a bit of a trade-off from that earlier deluxe issue. On the one hand, Warner's cloudless 1.78:1 anamorphic widescreen transfer, struck from restored elements, is a significant, welcome upgrade to the muted, scratchy presentation offered first by Pioneer, then by Warner itself on a 1997 DVD. On the other hand, Pioneer's release was a packaging feat, binding a copy of the screenplay between hard-shell covers that stored the LaserDisc platters, and it contained a longer version of the Charles Kiselyak documentary found on the new Warner DVD. (There it was called Completely Cuckoo; here it's "The Making of 'One Flew Over the Cuckoo's Nest'".) Warner's decision to exclude One Flew Over the Cuckoo's Nest's original mono audio could prove another source of controversy--all you'll hear on this DVD is a 5.1 remix that, to be fair, has monaural tendencies, relying heavily on the centre channel. Only the fishing trip sequence opens up the soundstage.

Serving as an abridgement of the half-dull screen-specific commentary from Forman and producers Saul Zaentz and Michael Douglas on Disc 1, Disc 2's "The Making of 'One Flew Over the Cuckoo's Nest'" (47 mins.) features fairly recent interviews with Forman, Zaentz, Douglas, most of the actors save Nicholson (who's spoken of so often that you almost won't notice), various technical supervisors, and co-screenwriter Bo Goldman, who contributes a moving coda to the piece. Forman starts off by telling us that for him, the institution depicted in One Flew Over the Cuckoo's Nest is like the politically repressed Czechoslovakia of his youth in microcosm. Unlocking the film in other ways are anecdotes from Vincent Schiavelli ("Frederickson") regarding characterization, such as the day production designers laid out random personal belongings and asked the then-rehearsing actors to select "theirs." It's a good doc in this form, but I miss Ken Kesey's melancholy contribution to Completely Cuckoo--the late author has been deleted entirely from this redux.

Eight "Additional Scenes" (squeezed to 2.35:1 in their 16x9 enhancement, for reasons unknown) totalling thirteen minutes show orderlies harassing Sampson's Chief and provide a look at last of a silly scene--McMurphy strutting around without pants--we see in stills from the play at the beginning of "The Making of 'One Flew Over the Cuckoo's Nest'", when Kirk Douglas owned the Nicholson role. The surprisingly profane theatrical trailer (1.85:1, 16x9), cast and crew filmographies, and a list of the awards received by the film round out the Warner set, which I'd endorse without hesitation for the gorgeous video alone. Originally published: September 23, 2002.

'08 BD
Warner shepherds One Flew Over the Cuckoo's Nest to Blu-ray in a lovely 1.78:1, 1080p presentation. This is the same transfer that was used for the 2002 DVD, but because Warner knew what they were doing back then, it holds up in the HiDef realm. The extra resolution only increases visual interest in a film generally considered monotonous to look at. Blacks crush in the introductory shots of McMurphy (his toque becomes a solid inkblot), but the problem quickly remedies itself and the only significant issue that remains is the occasional pinhole artifact. The DD 5.1 remix gets recycled as well and it, too, shows a marked improvement here, sounding consistently fuller, if no more expansive. Extras are identical to those of the Two-Disc SE; unfortunately, Warner did not take this opportunity to restore the Charles Kiselyak documentary to its original length (there's certainly room), though the hardcover packaging and handsome, marginally-informative 37-page insert booklet go some way towards approximating the form of the Pioneer Special Edition LaserDisc, which I still keep on my coffee table. Originally published: August 19, 2008.

'10 BD
Warner finally restores Completely Cuckoo's full length and title for this Blu-ray box set reissue of One Flew Over the Cuckoo's Nest, which has no official designation but in terms of size closely mimics the Harry Potter Ultimate Editions. (Thick as a brick, the package includes: a stacked BD; a 52-page hardbound book featuring Criterion-style liner notes by Charles Kiselyak; miniaturized reproductions of four theatrical posters, lobby cards, and the original pressbook; and a deck of playing cards (McMurphy is the Ace, natch).) The 86-minute Completely Cuckoo (SD) contains previously elided segments with the compellingly weird Ken Kesey, who of course authored the movie's source novel, basing it partly on his experiences as an outpatient at an insane asylum. What Kesey's comments provide the documentary, still Kiselyak's best, is a personal, historical, and sociopolitical context for the story of One Flew Over the Cuckoo's Nest and its many permutations. But Kesey's contribution is not the sum of the restorations, as the late William Redfield gets his due in a sequence that talks about the actor receiving a terminal diagnosis midway through production and toughing out the rest of the shoot.

New and exclusive to this release, Kiselyak's "Asylum: An Empty Nest for the Mentally Ill?" (30 mins., HD) catches up with Dr. Dean Brooks, the retired head of Oregon State Mental Hospital who essentially played himself in the film. Now in his 90s, Brooks is alternately disillusioned and hopeful about the state of psychiatric health care and renovations to his former workplace, where his daughter and granddaughter carry on his legacy. Michael Douglas chimes in about the picture's lasting effect on his life, but mostly this is an ambivalent state-of-the-union address that has the chutzpah to speak out against patients' rights. Tech specs for One Flew Over the Cuckoo's Nest proper remain unchanged (no lossless audio option, unfortunately); as before, the Zaentz/Douglas commentary, eight deleted scenes, and the movie's theatrical trailer round out the disc. A downbeat but substantial stocking-stuffer. Originally published: December 7, 2010.