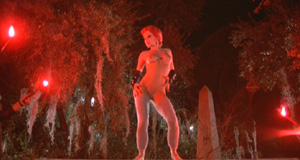 by Walter Chaw Sort of a cross between Dawn of the Dead and Valley Girl, Dan O'Bannon's hysterical The Return of the Living Dead most resembles in the final analysis O'Bannon's own cult favourite Dark Star, directed by John Carpenter. Both pictures exist in an insular environment, both skewer genre and societal mores, and both, oddly enough, have something of a political conscience. Positing that Night of the Living Dead was based on a true story and that the remnants of that zombie conflagration have been stored in barrels accidentally shipped to the Uneeda Medical Supply Company (where goofy stock manager Frank (a fabulous James Karen) carelessly starts the horror cycle), The Return of the Living Dead turns a satirical eye on Reagan's hawkish heart, the sprung logic of Italian zombie movies, and John Hughes's brat-pack films.

It's Freddy's (Thom Mathews) first day on the job at Uneeda when the corpse-animating "245 Trioxin" gas, the product of an evil military experiment gone awry, is released at the hand of Frank's over-exuberant confidence in the "army corps of engineers." Meanwhile, Freddy's pals--an unlikely menagerie of punks and preppies covering the entire range of eighties teen stereotypes--kill time waiting for their friend by playing The Cramps on a boombox in an adjoining boneyard and talking a lot about those me-generation concerns of suicide and partying. As the gas seeds some clouds, creating the eco-terror of zombie-causing acid rain, the revelers (including a swiftly-naked Linnea Quigley, bless her B-heart) become the unwitting prey of an army of quick--and smart--zombies.

Recognizing that the kids are satirical types meant to be fodder for rampaging hordes of flesh-eating republicans--I mean, "cadavers"--The Return of the Living Dead allows veteran character actors Clu Gulager and Don Calfa to rule the day as Frank and Freddy's boss Burt and mortician Ernie, respectively. Together, they provide the heart and soul of the film--a mute commentary perhaps on the John Savages of the world being the real backbone for any good horror flick. A hilarious running gag involving an endless parade of paramedics and cops getting overwhelmed takes on an added dimension if one runs with the idea that the film is something of a metaphor for an ideological class struggle. A giant oven, a corkboard rendering of Eva Braun, and a reference to WWII Germany each take on fascinatingly dark, unexamined echoes as well.

Occurring at a time when horror films were unafraid to push the envelope in terms of nudity and gore, The Return of the Living Dead has refreshingly ample amounts of both. Though the gore is decidedly low-budget, the key zombie (its refrain of "braaaaaiiiins" cribbed in a "Simpsons" Halloween special) looks really nifty, while various other effects at least register as corporeal rather than the computer-generated phantoms of today. The tone is consistently irreverent throughout, with subtext remaining just that as the main thrust of the picture is interested in shocks and bargain basement gross-outs. The lingering effect of the picture, however, is one of a good, unpretentious, zero-budget time punctuated by the sadistic satisfaction gleaned from an entire surrogate cast of The Breakfast Club messily consumed by brain-eating living dead.

THE DVD - 2002 release
MGM releases The Return of the Living Dead on an excellent platter that features a beautiful anamorphically-enhanced video transfer (at an aspect ratio of approximately 1.87:1) on one side and a standard full-frame presentation on the other. The print shows the grain of a film just this side of two decades old, but the colours are unexpectedly warm and lurid, particularly in chapter 10 as the gore gets going full blast and a chorus of bogeys are illuminated in a doomed ambulance's headlights. Most importantly, black levels and shadow detail are just fantastic. A surprisingly nice Dolby 2.0 mono track displays many of the limitations of the monaural format (overlapping chief among them) but presents the punk soundtrack and pulp dialogue with a high level of clarity.

A very congenial and informative yakker featuring O'Bannon and production designer (and pulp artist) William Stout highlights the special features on this disc. The duo express a fair amount of disappointment with the restrictions a small budget wreaks upon special effects while providing a fantastic amount of actual how-to tidbits ("See there, I was under there with a hypo so the spine would leak spinal fluid!"). I was pleased to hear a Billy Wilder anecdote and several acknowledged nods to Hitchcock, but the most surprising revelation is probably the tale of a producer balking at Quigley's full-frontal performance and demanding a prosthetic, anatomically incorrect, crotch for the actress. Talk about a collector's item.

A brief featurette also with O'Bannon and Stout in which they briefly outline the film's origins as a straight sequel to George Romero's Night of the Living Dead is refreshingly free of obsequiousness and plot rehash. Best, it manages to avoid repeating too much of the commentary track, acting as a wonderful companion piece to the DVD proper rather than a redundancy. Although there are oblique hints to some of the torturous history of the development and behind-the-scenes struggles of The Return of the Living Dead, the piece for the most part is upbeat and informative. Stout's magnificent production stills are showcased in a conceptual art option--his style is classic EC Comics, somewhere in the softer south of Bernie Wrightson, and this portfolio is indispensable for the pulp visual art aficionado or, like myself, neophyte. Ten separate TV spots plus R- and G-rated trailers round out this long-awaited DVD release of The Return of the Living Dead. Originally published: August 20, 2002.

THE DVD - COLLECTOR'S EDITION
by Bill Chambers MGM reissues The Return of the Living Dead on DVD in a Collector's Edition updated to Fox specs (the DD 2.0 audio has been reconfigured for stereo) that also does away with the fullscreen version of the previous disc to accommodate fresh bonus content courtesy of Light Source & Imagery. With the exception of the William Stout portfolio and TV spots, all of the old extras return, newly supplemented by, among other things, a convivial commentary track featuring Stout (who claims the film was shot in 1982--did it really sit on the shelf for three years?) and cast members Don Calfa, Beverly Randolph, Brian Peck, and Linnea Quigley, who keeps the nostalgia in check with personal recollections of strep throat and violent extras. Because this ragtag group (minus Stout) resurfaces in the 21-minute featurette "The Dead Have Risen" (where they're joined by co-stars Clu Gulager, James Karen, Thom Mathews, and the Tarman himself, Alan Trautman), a lot of anecdotal information gets recycled, though given that we haven't seen most of these actors since they were in the prime of their youth, the piece has the ghoulish appeal of a high-school reunion.

Forced to lean on clips from the MGM library (Killer Klowns from Outer Space, Pumpkinhead--these are not beloved films), "The Decade of Darkness" (23 mins.) is a slightly myopic overview of the trends in genre filmmaking circa the 1980s, with embarrassing quips from Elvira further diminishing the word of legitimate authorities like John Kenneth Muir, Joe Dante, and FANGORIA editor Tony Timpone. A "zombie subtitle stream" and similarly-illegible "zombie thoughts" option (available as an easy-to-find Easter egg) join trailers for The Return of the Living Dead, Jeepers Creepers, and Jeepers Creepers 2 as well as the "MGM Horror Films Trailer" in rounding out the platter, which comes sheathed in a non-descript glow-in-the-dark slipcover. Originally published: September 3, 2007.

THE BLU-RAY DISC
by Bill Chambers MGM, through Fox, brings The Return of the Living Dead to Blu-ray in a combo package with the Collector's Edition DVD, though thankfully this time they don't expect you to pop that disc in to access all the supplementary material, or even some of it, as the Blu-ray is a complete port of the CE, minus the trailers for other films. Compared to the standard-def alternative, the new 1.85:1, 1080p transfer is a little brighter and more legible (the graffiti-strewn cemetery gates are easier to read), and a slight pink tint has been leeched from the image, resulting in improved colour definition. I've read accusations of DVNR and they are mostly unfounded, although this HiDef presentation does significantly tame the wild, poorly-resolved grain of the DVD. The attendant 5.1 DTS-HD MA track adds a bit of body to a tinny-sounding flick; it's a remix in the sense that rainfall becomes a surround-sound effect, but other than that most of the audio is, as usual, anchored to the front mains, if not the centre channel. The featurettes return in standard-def, while the two trailers for The Return of the Living Dead got bumped up to HD. Originally published: November 26, 2010.