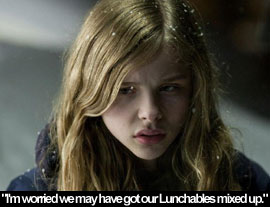 by Walter Chaw SPOILER WARNING IN EFFECT. Matt Reeves's redux of Swede Tomas Alfredson's lovely, understated, doom-laden Let the Right One In finds magnification in the wrong places while betraying what seems to be its better nature in order to present something more "palatable" to a popular audience. Wrong to call it a "dumbing down"--better to say that elements left unspoken or at arm's length in the original film are presented in Let Me In in as confrontational, uncontroversial a way as possible. More's the pity, as the movie begins with Ronald Reagan quoting Alexis de Tocqueville in his "Evil Empire" speech (delivered to the National Association of Evangelicals on March 8, 1983) on a television in a snowed-in New Mexico E.R.: "Not until I went into the churches of America and heard her pulpits aflame with righteousness did I understand the greatness and the genius of America... America is good. And if America ever ceases to be good, America will cease to be great." It's a thread of Christian fervour that weaves through much of the first twenty minutes of the picture, through the introduction of our hero, Owen (a tremendous Kodi Smit-McPhee), suffering an extended Grace delivered by a faceless mother (Cara Buono) and, later, an admonition by an also-faceless father over the telephone that Owen's mother is unbalanced and should stow her Christian shit a bit more tightly. The lack of the father as a physical presence in the film becomes a poignant elision in this respect: in a film about good and evil, the divorce between Father and Son, as it were, is a pithy one.

But Let Me In doesn't follow through on its examination of the United States as a place plagued by extreme, fundamental religiosity. It sidesteps the carnal decay and frustration (and lust!) of Park Chan-wook's just-awesome Thirst and declines to wade into the essential madness of Twilight's acceptance as, somehow, an anthem for romance and abstinence as imagined by a mad Mormon housewife. It raises rich, soulful questions about our de facto theocracy--sniffs curiously around the idea of Original Sin and the origins of abomination (if not God, then Who?)--then drops them in little flurries of poor CGI and cheap gross-outs that feel embarrassed despite their front-and-centre placement. It's not alive with even one idea, neutering the 2008 picture by trivializing Owen's budding sexual voyeurism with a cheap peep at a hot neighbour and eliding entirely the castration reveal of its source material (book and film), so that lines like "Would you like me even if I weren't a girl" lose their triple entendre to become something more childish, less worthy of a second thought. The ultimate revelation that Owen is doomed to be another blood puppy like poor Father (Richard Jenkins), bald and old and mad and jealous into his dotage, is undercut by the boy's discovery of a photo-booth picture sequence that shows a young Father in thrall to ageless Abby (Chloe Moretz). What feels like another victimization in Alfredson's film is here implicitly a choice Owen's making to be a serial killer for love. That's a pretty different movie.

What works about Let Me In, though, and arguably works better than it did in the original, are the scenes in which Owen is tormented by bully Kenny (Dylan Minnette) and his band of ne'er-do-wells. They have a visceral quality to them that Alfredson's more dream-like treatment blunted. Let the Right One In feels like an allegory for the vulnerability of young men coming of age--a suggestion, brilliant, that there are wolves in the forest for boys in red hoods as well. Let Me In is more interested in presenting the humiliation of being the small one in swim class, in the locker room, after school, on the way to wherever when the places off the trail loom with promise of every mysterious means to degradation. Thus when it comes time for Owen to flee in the company of a monster, he does it as a possessor of choice. It humanizes Kenny, too, in the arrival of an even creepier older brother (Brett DelBuono) who uses the same language Kenny has used in humiliating Owen--the same tactics, too, in identifying the character as a representative of an Old Testament kind of retribution. The ground is laid, then, for the final confrontation between Owen and his tormentors at the bottom of a pool to be this grand baptismal circle addressing the cycle of rage from which Owen is reborn as only the newest invitation to engage in atrocity and atrocity's retribution. What there is, instead, is a hole in place of thematic closure--a shrine to another Swedish film, The Girl with the Dragon Tattoo, in which a fatal lack of introspection dooms its hero to be, with full knowledge aforethought, the exact sort of psychopathic moron responsible for all this destruction in the first place.

Reeves captures the New Mexico winter beautifully with rising-star DP Grieg Fraser (his work on Bright Star was among the best of last year), shooting the rimes of frost on windshields outside a midnight convenience store with the clarity of a native to the frozen West. Jenkins is amazing in a near-wordless role; Moretz is fabulous, if outpaced by a few of the lines she's meant to say (especially the film's worst romantic copout in the immediate aftermath to a groundbreaking "mythos" sequence late in the game); and Elias Koteas steals the show as a beaten-down detective on the hunt, though his character feels ever out-of-place, even didactic. A new scene shot from the point-of-view of a car accident is wonderfully-conceived and executed--as well as the lone echo from Reeves's Cloverfield--and the picture is evocative of Ti West's The House of the Devil in its ineffable period feel. Let Me In gets so much right, in fact, that the moments where it descends to horrorshow F/X and the new popular American vogue of ladies' clubs reading disgusting rape-revenge pulp in tight little spirals of hate and acceptance of the same glare all the more brightly as sops to the popular taste. Even if that taste's for blood, even if that taste for blood answers, extra-textually, that America, in this vogue for wholesale pandering to the Ten Commandments instead of the Beatitudes, is just possibly no longer great. Originally published: October 1, 2010.