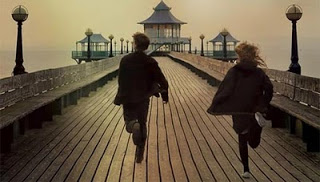 Friday began with Jack Goes Boating, the directorial debut of Philip Seymour Hoffman, who also stars as the title character. Jack is an airport limo driver who's been the third wheel in the lives of his married friends Clyde (John Ortiz) and Lucy (Daphne Ruben-Vega) for so long that they've decided to intervene by setting him up with the mousy but receptive Connie (Amy Ryan). The movie, adapted--and, one suspects, significantly "opened up"--by Bob Glaudini from his own Off-Broadway play, casually parallels their burgeoning romance with the evaporation of Clyde and Lucy's relationship. In a fall preview on his delightful blog, Nick Davis summed up his level of anticipation for Jack Goes Boating thusly: "Loved Synecdoche but can't take much more schlub." Truer words, etc. Jack isn't just a schlub, he's the ur-schlub, a maddeningly static individual who has to be nudged into action like a soccer ball, and Hoffman lights and poses himself to look as appetizing as Grimace from the Happy Meals. I much prefer another passion project of Hoffman's, Love Liza: although it operates on the same demented frequency as Jack Goes Boating, there's a whole slew of theatrical affectations to contend with this time around. (You can eventually set your watch to Jack's nervous throat-clearing.) Ortiz is tremendously winning, though, in a bromantic role that reveals a lot more range, not to mention teeth, than Hollywood's ever given him a chance to show. Jack Goes Boating reminded one woman I spoke to of Rocky; I can see it if I squint.

The more aggressively deadpan Curling is the first film I've seen from the well-regarded Canadian filmmaker Denis Côté, and I'm getting a strong Kaurismäkian vibe from him--though VARIETY's review of Curling claims that Côté traffics in "arthouse misery." Maybe it's that a Canadian can see the humour in the sort of wintry desolation this movie depicts and an American can't. Real-life father and daughter Emmanuel and Philomène Bilodeau play, or perhaps role-play, Jean-François and Julyvonne Sauvageau, rural Quebecers trapped in a prison of the former's making. Lots of parents don't want their children to grow up, but Jean-François seems uniquely determined to freeze Julyvonne on the precipice of womanhood, sheltering her from the outside world to the extent that she doesn't go to school--he buys textbooks for her that probably collect dust--and doesn't get to go to work with him at the bowling alley (where the picture's most overt comedy springs from), because it's not "safe" for a twelve-year-old. She's left to her own devices at home, however, which ironically hastens her loss of innocence once she stumbles on some dead bodies (and, inexplicably, a tiger) during a stroll through the nearby woods. A slow burn that respects the audience's literacy when it comes to subtext, Curling is a gratifyingly dense piece that pings off zeitgeisty anxieties about powerlessness I wouldn't describe as exclusively parental. Further reading: Jason Anderson's cover story on the film and Côté's career in the latest issue of CINEMA SCOPE.

I succumbed to buzz by ending the day with Mark Romanek's Danny Boyle-esque Never Let Me Go, which proved not-uncomplementary to Curling in that they're both about dead-end indoctrinations of the young. Based on the beloved (and unread-by-yours-truly) Kazuo Ishiguro novel, Never Let Me Go represents an alternative history in which genetic cloning became possible in the fifties, inspiring the government to begin breeding people to give up their organs in adulthood; the story follows a love triangle from its inception at a Hogwarts-like school for future donors to its pitiful "completion" in sterile operating rooms. Never Let Me Go represents, too, my least favourite kind of exploitation: the polite, pretentious kind that, somewhat hypocritically, plays coy with the specifics while getting off on the emotional sadism of its high concept. (The movie is three innocents placidly riding a conveyor belt to a meat-grinder.) The blue-collar filmgoer in me would not stop asking literalminded but no less valid questions Never Let Me Go is above addressing, such as why don't these motherfuckers run? At the risk of accusing the book of same, the whole thing reeks of fear of genre, and while Romanek's direction is certainly moody, it lacks the tone-poem quality that might've transformed evasion into evocation. Credit where credit is due, the kid they cast as young Carey Mulligan (one Isobel Meikle-Small) looks so much like a shrunken version of her that it's actually topical, but my final recommendation is to watch Seconds or Blade Runner again instead.