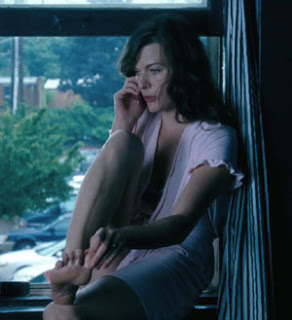 Stone opens...if not promisingly, then intriguingly, with stand-ins for young Robert De Niro and Frances Conroy experiencing what is presumably only an uglier-than-usual day in a loveless marriage as she announces she's leaving him and he threatens to throw their baby daughter out the window if she does. Though this incident is never actually revisited directly, it informs every aspect of the De Niro character, a parole officer who uses his cases as a moral yardstick against his own transgressions and, as we've seen, treats his wife like a prisoner. Into his life enter convicted arsonist Stone (Edward Norton, doing voices now) and Stone's wife (Milla Jovovich), who's intent on expediting her husband's release through her considerable sexual charisma. Director John Curran (We Don't Live Here Anymore, The Painted Veil) frustrates: he has a nice eye for widescreen tableaux and good editing instincts, but despite their dramatic promise his films are crock-pots instead of pressure cookers, and Stone, like his previous work, never peaks in any way that could be conventionally described as satisfying. All kidding about his Travoltan croak aside, Norton is quite good, but the real stars of the show are Jovovich and the woman photographing her, Maryse Alberti, who shows her documentary roots in a close-up of the actress's blotchy legs, only to reveal a deepening interest in all the individual parts--the gumdrop toes, the antenna nipples, the dewy lips--that make up this authentically beautiful creature. De Niro is, alas, uninspired, and it doesn't help that his younger self is played by Enver Gjokaj, an actor with some of the hunger and tabula rasa range De Niro used to have; "Dollhouse" fans will wish for more flashbacks that fail to materialize. Worthy of further exploration: how Angus McLachlan's screenplay echoes the one he wrote for Junebug.

Post-Stone, I leapfrogged across the lobby to the much-anticipated I'm Still Here, which I have to FORCE myself not to type as I'm Not There. Here's my take on the whole Joaquin Phoenix-quits-acting-for-hip-hop thing: yes, it's a hoax--and what's pissing him off in this film is that everybody sees through it. (It suggests he's not a very convincing actor after all.) There are scenes in this movie, like when Puff Daddy tells Phoenix he doesn't like his music enough to take it on as a producer, that are just too well-timed in the vein of embarrassment comedy. Apropos of which, I liked Puff in this a lot more than I expected to: he has this great lecture about the democratization of the entertainment industry disrespecting the hardworking, talented people who deserve to be in it. Ben Stiller's cameo is heroic, too, and we infer real vitriol in his mocking impersonation of Phoenix at the 2009 Academy Awards. I also believe that Phoenix genuinely desired a break from (traditional) acting, that I'm Still Here is going to be as difficult for him to live down as a season of "The Surreal Life" would be, and that he needs a hug. And a Bowflex. Ian's got a full review of this one in the pipeline.