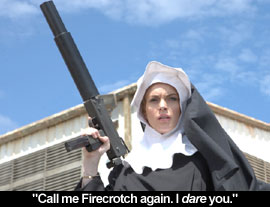 by Walter Chaw The only kind of movie Robert Rodriguez should be making as well as the kind of movie The Expendables should have been, the knowing, balls-out Machete is unforgivable, reprehensible, sleazy, disgusting fun, and somehow not entirely stupid. It gives props to the eternally quickly-dead character actor Danny Trejo as the titular ex-Federale, a grab-bag of Mexican stereotypes who in the course of his bloody rampage (for justice, of course) uses a weed-whacker and a pick-axe, among other day-labourer tools. Meanwhile, when he's picked up as a patsy in a senator's ploy, he more fears that he's being tapped for a "septic job." It's unabashed in its politics, taking on the illegal immigration debate in the United States with a naïve brio and outrage. But it's all the more winning, I think, for its complete lack of embarrassment about itself. The thought even occurs that the reason it works is the exact reason a few of the better drive-in/grindhouse/exploitation films of the Seventies worked: Born of low pretensions, it frees itself to explore its outrage with a simple-mindedness that rings with the earnest "geez!" of a Kevin Costner joint.

Machete has fallen on hard times as the film opens, with his wife slain before his eyes (and his daughter, we guess, slain somewhere off screen) by evil drug lord Torrez (Steven Seagal). Picking up jobs in one of those parking lots where a burrito truck holds court (this one run by tough-as-nails Luz (Michelle Rodriguez)), he becomes a mark in a plot by ace bad guy Booth (Jeff Fahey) to frame an Illegal for a failed hit on ultra-conservative Senator McLaughlin (Robert De Niro)--leaving Machete and his freshly-rekindled outrage to right what's not right. That's all there is to know and, like the lesson of Keats's urn, that's all anyone needs to know. Amidst the various tits, disembowelments, and beheadings, however, is a scene irreconcilable (and almost astonishing for it) where Lindsay Lohan, playing Booth's daughter and dressed as a nun, has a moment of real grace in which she gets everyone in a rumble to stop fighting. There's a suggestion here that, after having had Lohan play herself as a wayward girl fallen in with drugs and the wrong crowd, Machete is offering her the film's only hope for the possibility of salvation in its world. The movie, in other words, is actually unexpectedly--if only a little--kind.

Machete isn't a deep thinker, but it's got no illusions about what it is and, better than that, it understands the personas of Trejo, Seagal, Fahey, and even De Niro (and Lohan) well enough to lampoon them with some degree of affection. It deserves kudos, too, for having the gumption to nail a ganja-toking Cheech as a Catholic Priest to the cross in his church in one of several scenes so obnoxious as to approach transcendence. It resembles Alexandre Aja's Piranha remake, in that sense: there's nothing like reserve in its execution. Yet unlike Aja's picture, Machete doesn't always know it doesn't have a lot under the hood. Rodriguez remains the guy who likes the right things for the wrong reasons: When an army of Mexican blue-collar commandos converges on a redneck stronghold, pushing paleteria carts and driving tricked-out low-riders, it smacks of something like vacuous, frat-boy puerility--a feeling that the line separating celebration from exploitation was just crossed. What Rodriguez continues to do is clarify exactly how good Quentin Tarantino is; it's the difference between a guy copying his favourite movies without much comprehension of their appeal and an artist using the grindhouse as a starting point for a fulsome conversation. Machete's a blast, but there's nothing in its underneath. Well, except for that moment when it casts Lohan as a figure maybe deserving of a little compassion. In the middle of our culture of disposable lives, in the middle of a movie that wouldn't exist but for a celebration of the same, it doesn't get more existential than that. Originally published: September 2, 2010.