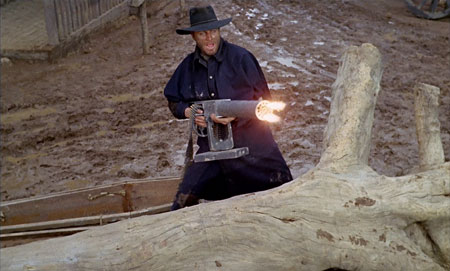 by Bryant Frazer When Django, the title character and hero of director Sergio Corbucci's seminal spaghetti western, first appears on screen, he's slogging on foot through mud, dragging a coffin behind him. The image is evocative and challenging. In classic American films, western heroes had generally been dignified cowboy types saddled up on strong horses. They were lawmen or simple ranchers with a code of honour. They rode into town in a cloud of dust and plainspoken righteousness backed up by a sharp eye and a six-shooter, and they stood for the endurance of traditional values on a wild frontier.

Django thinks those guys were pussies.

By the 1950s and '60s, the best directors of Hollywood westerns were earnestly exploring more complicated themes related to their usual subjects of civilization, the frontier, and moral values, including the slow but deliberate humanization of the American Indian and, occasionally, the apparent psychosis of the violent western hero. But Django, like the contemporaneous "man with no name" movies starring Clint Eastwood and directed by Sergio Leone, is outwardly cynical. In its corner of the Old West, a pack of murderous racist Americans fronted by one Major Jackson (Eduardo Fajardo) is antagonizing a gang of opportunistic wannabe-revolutionary Mexicans led by Hugo Rodriguez (José Bódalo). Blue-eyed Yankee killing machine Django (a handsome, scruffy Franco Nero) spills plenty of blood on both sides.

Released in 1966, Django is clearly cousin to Leone's wildly successful movies, although Corbucci doesn't mimic Leone's sweeping widescreen style, leisurely pacing, or lyrical approach. Instead, Django is a mean, unpretentious genre wallow. Django's coffin, for instance, can be a symbol of whatever you like, but its story function is purely black humour. People ask him what's in the coffin, and he responds enigmatically. At the end of the film's first act, he opens it and pulls out a ridiculously overpowered machine gun he ultimately uses to mow down countless opponents. That's not a very honourable thing for an Old West gunslinger to do, but Django, whose wife was killed by Jackson's men, has a score to settle.

The film moves easily through its 92 minutes. It certainly holds your attention, even though the story is almost comically uncomplicated: Django kills some Americans, then he kills some Mexicans, then he kills some more Americans, then some Americans kill some Mexicans, and so on, until there are just a few men standing in opposition to a badly-wounded Django. The only important supporting characters are the half-Mexican prostitute Maria (Loredana Nusciak), whom Django rescues in the film's first sequence, and Nataniele, the hapless bartender whose livelihood depends on the status quo Django is bent on upsetting.

In Europe, Django was so popular that dozens of unrelated knock-offs borrowed its title in a bid to gain credibility in the exploding Euro-western subgenre. It was never anywhere near as well known as Leone's films in the U.S., but American directors noticed its ease with gore and brutality. Sam Peckinpah was conceivably under the influence of Django when he made The Wild Bunch, which permanently raised the bar for violence in Hollywood movies by painstakingly choreographing more moments of death per minute than had been dreamt of in film history. One of Corbucci's more shocking scenes, depicting the severing of a traitor's ear, was re-purposed decades later by Quentin Tarantino for a famous scene in Reservoir Dogs. And gonzo Japanese maestro Takashi Miike's 2007 Sukiyaki Western Django, one of the oddest westerns you'll ever see, is an explicit homage to this film.

It seems worth noting that even though it revels in violence, Django is conspicuously shy when it comes to depictions of sex. The picture opens on a note of sadistic violence against its mostly-helpless female lead--who is, natch, rescued by Django--and features one mildly lascivious mud-wrestling scene that appears to wink knowingly at the audience (honestly, it wouldn't be out of place in Cat Ballou), but Corbucci politely yet firmly declines the opportunities for nudity. In what could be a nod to the conventions of Hollywood film, Django's sole love scene is represented by a tasteful fade to black. (Guess it's safe to bring the kids!)

Despite its status as, essentially, an exploitation film, Django is visually striking. Details are visible in every corner of the elaborately-dressed sets, and expert lighting helps make Nero's appealing baby face look downright stony. (The 24-year-old star grew a beard and had phoney wrinkles applied to give him a little more weathered appearance.) Cinematographer Enzo Barboni and production designer Carlo Simi work up a moody but saturated palette that features reds, blues, and purples against the dusty browns of the film's prairie landscape and its muddy frontier town. Barboni's later career as a director would include the franchise-launching They Call Me Trinity; Simi, who worked on the same year's The Good, the Bad and the Ugly, became Leone's production designer for Once Upon a Time in the West.

The film climaxes with a confrontation in a graveyard. Where Leone's use of a cemetery as a setting for the final gunfight in The Good, the Bad and the Ugly comes across as a statement about death not only as a staple of the western film but also as the inevitable endgame for contests between sufficiently greedy rivals, here it seems like Django, who kneels at a cross in order to steady his pistol, is there among the tombstones just to taunt his enemies, daring them to enter a burial ground they may never exit. Corbucci may lack Leone's ambition, but he lacks his lofty pretensions as well. If Leone is the greater and more broadly enduring filmmaker, Corbucci's Django has a grim, gritty appeal of its own. It's about getting the job done.

THE BLU-RAY DISC
Blue Underground's Blu-ray Disc definitely gets the job done, bringing Django into HiDef with a tack-sharp transfer from the original camera negative. It's one of those transfers with a picture so good you can plainly see the shots where the focus-puller screwed up. A screen that comes up before the film begins warns of visible "intermittent age-related damage," but a casual viewer would be unlikely to notice the occasional blotchiness that is, as far as I can tell, this presentation's sole significant defect. Though videophiles will see the spots, they should already be enthralled by a gorgeous HD image, slightly windowboxed to 1.66:1 (with thick black bars on each side of the screen and slim ones at the top and bottom), that preserves the fine grain of the negative stock while removing most imperfections from the frame. Tiny flecks of dust and dirt are occasionally present, and schmutz lingers at the very edge of the frame now and again, but none of this is distracting. Colours are rich but not artificially saturated, and the picture exhibits tons of dynamic range, with fine detail visible in the highlights and deep in the shadows. As usual with an H.264 transfer to BD-50, compression artifacts are not an issue, although with only 23.8 GB dedicated to the feature film, this particular BD is far from being full.

Having declined to tart up this old soundtrack to discrete-multi-channel surround, Blue Underground presents the audio here in lossless DTS-HD mono in both Italian and English incarnations. The two tracks have very different characteristics. The theme song, for instance, crooned by one Rocky Roberts doing his best Elvis impression, sounds pretty good in the English version but rather muddy in the Italian. Dialogue is much louder in the English mix, though it's been pushed so far forward that it sounds like it was recorded in a voiceover booth. The English mix is brighter overall, but as a result sometimes sounds quite shrill. The Italian version has a deeper and boomier quality, and the music and sound effects hold their own against the dialogue. Whether any of these differences have to do with clean-up done by Blue Underground on the original tracks is hard for me to say--some of them are surely just territorial preferences when it comes to mixing philosophies. Neither is bad, per se, but I prefer the Italian dub on purely aesthetic grounds.

As far as accuracy goes, the English subtitles seem to better represent the spoken Italian than do the dubbed lines. Part of this has to do with the difficulties of dubbing a language, but the English voiceover script waters down the dialogue, too. For instance, in the film's first conversation between Django and Major Jackson, Django's contemptuous references to the "southern pigs" (porci sudiste) are elided. Likewise, instead of describing Maria as a traitor to her race (la nostra razza), Jackson calls her a traitor "to our cause."

Special features are all in standard-definition. Corbucci died in 1990, well before the Golden Age of Audio Commentary, so this disc doesn't find him recording a yak track. The film's assistant director, Ruggero Deodato (revered among gorehounds for helming Cannibal Holocaust), speaks for him to some degree with a few anecdotes from the set in the talking-heads featurette "Django: The One and Only" (13 mins.), initially created for Blue Underground's 2003 DVD release of the film. Also interviewed, Franco Nero makes sidelong reference to a falling-out he had with Corbucci that separated them professionally. He says that by the time he was ready to do Django 2 in the late 1980s, Corbucci was too ill to direct. (The job went instead to Nello Rossati.)

Corbucci does make a personal appearance in the 1968 spaghetti-western documentary "Western, Italian Style" (38 mins.), an American production that additionally interviews The Inglorious Bastards director Enzo Castellari and director Sergio Sollima from the sets of various productions. B-roll from Corbucci's Il grande silenzio, Castellari's Ammazzali tutti e torna solo, and Sollima's Corri uomo corri is featured along with cloying narration by one Frank Wolff. (Il grande silenzio star Jean-Louis Trintignant shows up briefly to discuss the best way to wear a cowboy hat!) It's not great, though it's probably worth a look to anyone with an interest in the background of Euro-westerns.

"L'ultimo pistolero" (10 mins.) is described on the box only as "starring Franco Nero." For some reason, I expected it to be a short film at least somewhat contemporaneous with Django, but that's not the case. This black-and-white 1992 short plays like an especially committed student film set to a bleepy-bloopy score that explicitly references Ennio Morricone but eventually sounds like videogame music. Big-time Franco Nero fans may enjoy it. Italian and international trailers for Django are also on board. Finally--or firstly, depending on how you figure--there is a brief (32s) introduction to the film by Franco Nero that's accessible (or skippable) when you first hit play to watch the movie. Originally published: August 3, 2010.