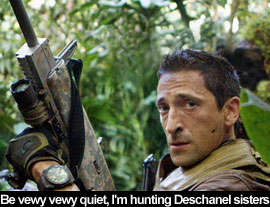 by Walter Chaw It opens with a grab-bag of heavily-armed genre clichés--the world-weary man of action (Adrien Brody), the tough-talking Latina (Alice Braga), the mad-dog orange jump-suited killer (Walton Goggins), the Yakuza enforcer (Louis Ozawa Changchien), the Soviet (Oleg Taktarov), the savage (Mahershalalhashbaz Ali), the nebbish (Topher Grace), and the wrong Mexican (Danny Trejo)--free-falling through a jungle canopy into bush that doesn't make Cambodia look like Kansas so much as it makes Predators look like Avatar. They're the game, see--the most dangerous game! And they've been dropped on an alien wildlife preserve for the express purpose of being hunted by a trio of the titular Predators. As if that weren't enough, the film's weak-ass script takes pains to establish that our "heroes" are also, vocationally, "predators." Get it? It's what passes for clever in a film that takes too long to get where we want it to go, diverting itself with one of those dumb nick-of-time animal-shooting sequences that didn't thrill in Dances with Wolves and doesn't thrill here (so they do it twice, why not), as well as an extended monologue delivered by a fish-eyed, paunchy Laurence Fishburne that, for all its kitsch pleasure, grinds the movie to a standstill. If it's not going to be smart, it could at least have the decency to not also be boring.

Thought out precisely as one would expect from the fourth or fifth instalment of a series that should've gone direct-to-video long ago, the highlight of Predators, such as it is, involves our yakuza guy fighting one of the predators in a field of waving grass with a samurai sword. A reference to Hiroshi Inagaki's Samurai Trilogy, right down to the lighting, it shows Nimród Antal as a director with a great deal of promise, albeit the same promise he's been showing since his debut (Kontroll) seven years ago. Most disappointing, though, is that the picture lacks balls. The baddies are largely indistinct save said cool/stupid sequence with the samurai sword and despite the pains the film takes to distinguish them as particularly skilled killers--and when it comes time to lather on some of that old-time nihilism, it chooses instead to execute a couple of clumsy twists surprising only because they're so lame that most of the audience for even Predators would likely reject them offhand. It all plays like an overlong cut-scene for a shitty videogame, though any gamer worth his salt would resent the players' seeming inability to assume their captors' superior armour and weaponry when presented with the opportunity. Not a good movie, Predators would also make a piss-poor game. What lingers about it is the sense that there's been a tragic misunderstanding of how the first film spawned so many sequels in the first place.

Predators feels every bit as stilted and dated as that high-concept episode of "The Twilight Zone" called "Five Characters in Search of an Exit." It's not smart, it's not especially exciting, and for a film set on an another planet, it's surprisingly free of imagination. Think what Guillermo Del Toro would've done with this film and this premise and be glad he's taken himself off The Hobbit to concentrate on the fruits of his own febrile invention. Alas, this is mostly the product of producer and original screenwriter Robert Rodriguez, who appears incapable of any kind of useful interpretation. His Planet Terror doesn't understand the notes it's playing, for instance, while his Once Upon a Time in Mexico is an embarrassing grasp at completing an ersatz Sergio Leone trilogy. (His Sin City is good because he just represents the source material without trying to understand it.) He believes he's returning this franchise to its roots, but Predators doesn't know what the hell Predator is about because it thinks Predator is about a bunch of muscle-freaks shooting at an invisible monster. And because it thinks that, Predators presents itself as a movie about a gang of misfit killers dumped, free of context and complexity, into a forest to fight invisible fiends. It's dumb to the point of being simple-minded and frustrating in that exact way that Rodriguez's films are always frustrating. It's the conversation with that energetic guy who likes all the right things, for all the wrong reasons. Originally published: July 14, 2010.