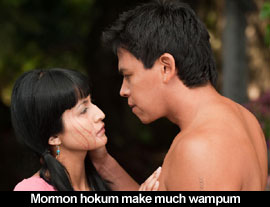 by Walter Chaw The first and greatest surprise of The Twilight Saga: Eclipse (hereafter Eclipse) is that it's not awful; it's actually almost good for its first forty-five minutes or so, until the burden of Stephenie Meyer's genuinely, legendarily poor source material catches up to it. Until such time, there's some interest blossoming despite itself in the love triangle between mopey Bella (Kristen Stewart), fruity Edward (Robert Pattinson), and swarthy Jacob (Taylor Lautner): a hint of racial discomfort, a soupçon of class struggle, a glimmer of insight given over to the difficulties of teen relationships at a moment in life when Nancy Drew plays like Richard Wagner. Never mind that of the three leads, only Pattinson delivers a (surprisingly, too) good performance--and then only fitfully; never mind that Meyer has taken a giant, steaming dump on centuries of folklore and tradition to construct thin cardboard monsters that serve as bad metaphors for Mormon libido (as told by Judy Blume's less talented soul sister); never mind that the picture's entire last two-thirds devolves into constant repetition of the will she/won't she theme punctuated by its stupid mythology. Really, the way that new director David Slade's flat-to-the-point-of-garish camera brings out the faintest suggestion of corruption beneath the pancake makeup and baggy eyes of the film's immortal underwear models--who are, literally, ancient beasts--lends the series the dread that was buried in the first two films under volumes of camp and dreary incompetence. Not to say that Eclipse doesn't ultimately end as the same old bullshit, but for the first time, if only briefly, the clouds part for a brief, tantalizing twinkle of what it was that all this could have been.

Bella in this one wants desperately for Edward to penetrate her in some way, but, owing to the extreme limitations of the script and story, the hottest moment features Edward and eternally-shirtless Jacob on a camping trip, talking about what might have been if only Bella weren't caught in the middle. It's gayer than a French holiday and just one of several examples of the film stumbling around doing and saying shit the impact of which it doesn't remotely understand. It also leads one to naturally conclude that the real reason Edward doesn't want to poke Bella is that he's more interested in poking Jacob. (That's the price of reserving an intimate exchange in a perplexingly chaste and sanctimonious dialogue for its two half-clothed male leads.) Bella begs and Edward evades with much talk about saving her soul by not poking her until marriage while, all around, people are murdered in alleys and shipyards as an army of "newborns" is amassed by evil Victoria (Bryce Dallas Howard, replacing Rachelle Lefevre) for the express purpose of murdering centre-of-the-universe Bella. Jacob, meanwhile, invites Bella to a spirit council or some shit, leading to the first in a trio of idiotic flashbacks no more idiotic than the training montage that sprouts up in the middle of the film to prepare our heroes for brief immortal battle. What remains of some interest, for a little while, is whenever the film seems about to struggle with the real cost of a young girl making a choice at the beginning of her adult life that will affect her for the rest of her eternity. What readers of the last book in the series know is that this kind of choice in Meyer's blinkered cosmology is something rare, and illusory, indeed.

For what it's worth, the choice offered Bella in Eclipse is a smothering, possessive older man (much, much, much, much older) or an impulsive, racially exotic younger man (Bella calls Jacob "Chief" at one point, and it's really fucking hot), and, because it is what it is, she chooses the 120-year-old religious fanatic over the young guy living on the Rez. If this were an interesting film, the struggle would be between the pull of religious fundamentalism and (gasp!) miscegenation; because it's Eclipse, the struggle is between Team Edward and Team Jacob. Since "choice" can only be said so many times before it's word mush, Slade provides a couple of also-surprisingly nice action sequences that fail to be exciting but do possess, at least in an early chase through the woods, a certain grace in their choreography. One does wish that Slade had taken his film and run from its responsibilities to its legion of fans and deadweight author. That he'd made the things that seem to be interesting to him the centre of the movie instead of shuffling them off to the periphery just so that all the stuff that delights only fifteen-year-old girls (in fact or at heart), the puppies and Fabio book covers and Prince Charming speeches, could occupy the proscenium. It says a great deal that Eclipse is a dramatic improvement over the previous films in the Twilight series and still a pretty fair-sized disappointment. Originally published: June 30, 2010.