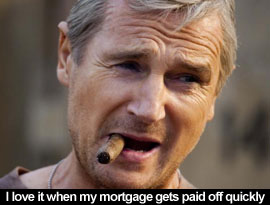 by Walter Chaw Not the full-on prison rape its preview promises, Joe Carnahan's is-what-it-is The A-Team is a sometimes-affable acceptance that the best this film will possibly be, given that it has not one spark of inspiration in its creation, is an expensive knock-off of a kitschy cultural artifact. It doesn't quite go the route of surreal post-modernism like the The Brady Bunch movies, but neither does it try to play it Leave it to Beaver straight, instead walking a middle road through occasional flashes of self-awareness amid much stupid action. Credit where credit's due that, prior to its bombastic finale, disgraced Col. Hannibal Smith (a miscast Liam Neeson) mutters, "Overkill is greatly underrated," despite that overkill in bad movies like this is neither overrated nor unexpected. I guess I just appreciate the opportunity to chortle smugly. Rather, The A-Team is a Michael Bay joint without the overt racism and dangerous misogyny--a picture for nostalgic and/or stupid people that doesn't also make them bellicose and agitated. At the least, it holds the honoured distinction of being the first movie I've ever seen that uses a quote from Gandhi to shake a career assassin out of his newly-acquired distaste for violence. That, my friend, takes a certain level of genius and chutzpah.

For the uninitiated, Hannibal leads a ragtag team of misfit Army Ranger operatives on various impossible missions at the behest of the tired, poor, huddled masses yearning for Special Forces wackadoos to wreak unholy vengeance and hellfire on those who've wronged them. Can't get more American than that, am I right? There's burly mechanic B.A. Baracas (Quinton "Rampage" Jackson), who, as the only African-American on the team, is treated as a dangerous animal they need to constantly trick into sedation in order to soothe his fear of flying; handsome Face (Bradley Cooper), who likes to fuck women; and crazy pilot Murdock (Sharlto Copley), a caricature of mental illness I'm sure would be objectionable if I gave a crap. Together they engage in hopelessly convoluted rififi resulting in a lot of explosions and gunfire and then the ceremonial lighting of Hannibal's phallic stogie, suggesting that, if the creators had any thought in their heads, they went hard after Mel Gibson for the role first. "I love it when a plan comes together, Sugartits." Throw into the mix comely Capt. Sosa (Jessica Biel), who has a thing for Face (lucky for him--see above); evil rival wackadoo Pike (Brian Bloom); and, playing an evil CIA spook, Patrick Wilson, who walks away with the movie in a near-brilliant turn equal parts goofy egoist and stunned dullard.

Fans of the television show--hopefully fans only because they have a healthy appreciation for old-school garbage--will find that The A-Team captures the extreme silliness and violence of the series with only a little added death and Gandhi to sweeten the mix. Neophytes will find a gay(er) Charlie's Angels mashup involving a band of cartoon Rescue Rangers doing impossible things to physics in a celebration of being an all-American doorknob. Either way, it's dada. For what it's worth, there's a scene involving 3-D glasses that's ripped off from Gremlins 2--and, all things considered, Gremlins 2 is the superior exercise in every possible way. If The A-Team isn't completely odious, credit parents for not properly monitoring what their children should be watching and thus implanting in them, once they hit a certain thirtysomething plateau (as I have), an unusual tolerance for this variety of "MacGyver" can-do patriotic boom-boom as acted out by a badass geezer, a pretty boy, a black dude, and a guy afflicted with hilarious psychoses. All that needs be said, really, is that the central image of the film takes place in a Three Kings Iraq where a large explosion has thrown a billion dollars in hundred-dollar bills into the air to rain down on our quartet of righteous rebels, fire in the background, grim looks in the foreground. It's a snow-globe pastiche of the American cultural diaspora: shake it up and watch shit fly, motherfucker. Originally published: June 11, 2010.